Another brave writer submitted their first page for critique. Catch ya on the flip-side.

It wasn’t supposed to be this way.  We had it planned, Tom and I. We said goodbye to friends – hoping retirement would be an adventure in everything we did. To drive cross country to New England, a picture postcard of snow and autumn leaves coloring the landscape in hues of red, orange, and yellow.  The Coronavirus took my Tom a week before the move.  His labored breathing and limp body placed in the ambulance drove him to the hospital.  I tested negative.  I never saw him again.

It wasn’t supposed to be this way.   Oh sure, plans change, but no one ever thinks death will stop you cold.  Well, it stopped Tom and the hospital confirmed my worst fears.  Grateful to the nurse who held his damp, feeble hand, I listened to his last gasp from the speakerphone.  Tom was gone, the house was sold, and the movers expected me in Connecticut in two weeks to unlock the door.  My new life began without the love of my life.

My name is Joanna Seavers, and I am a 59-year-old retired teacher living in the age of Covid-19 or the Coronavirus or whatever the hell it’s called.  Who knows, and who cares?  All I know is the world stopped for Tom and me in 2020, and everyone else for that matter.

One thing I’ve learned in life, even in a pandemic, is never stop planning. It’s what keeps you alive.  You need a reason to get up in the morning, so I got up.   The pandemic wound down, and I drove north.  Businesses reopened and the population was injected with the second shot of the lifesaving serum.  Mask wearing became optional, but on occasions, I still wore the cloth covering my nose and mouth.  You can’t be too careful in a crowd.

Driving down the highway, the virus in my rearview mirror and Alfie, Tom’s faithful bird dog, really a raven, sitting in the passenger’s seat.  Not sure why my husband had a pet raven, but the relationship remained solid for fifteen years.  I read somewhere domestic ravens have a life span of 40 years, so it was a good thing Alf’s loyalty shifted to me.  We clicked and his companionship sustained me as we drove from the Bay Area out of California, not looking back to what we had lost. 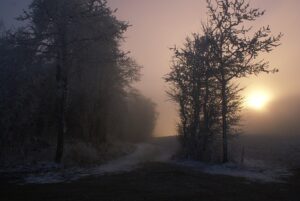 I like the voice of this first page. The biggest problem for me was the lack of emotion. The words are there, but it’s not visceral. You can’t gain empathy for Joanna unless the reader feels her pain. As written, she doesn’t seem all that broken up. If Tom’s death is the trigger that kickstarts Joanna’s quest, it needs to pack a bigger punch. Because the first time I read this page, I thought maybe she’d planned his death…till she mentioned the coronavirus.

Dig deeper, Brave Writer. She’d pinned all her hopes and dreams on retiring with Tom. They had plans, plans they talked about for years. Where’s the grief? Where’s the heartache? Where’s the anger over not having the chance to hold him on his deathbed, of one last kiss, of professing her undying love to the man she’s spent a lifetime with? Tom’s death acted more like a minor blip in Joanna’s life.

To deliver a bigger bang, you need to let the emotions unfold gradually. We’re not fine one minute and hysterical the next. Emotions build in layers, change and intensify, and finally reach a crescendo. For Joanna, Tom’s death should be soul-crushing.

Actually, this is the perfect example of why JSB recommends interviewing characters.

A few questions for Joanna could be:

When did you first know Tom had the virus?

What made you call an ambulance?

How did you feel when the medics said you couldn’t accompany Tom to the hospital? Lost? Empty? Frightened?

Did you have a physical response?

Who broke the news of your husband’s decline? What’d s/he tell you? How did it feel to hear those words?

Are you a different person without Tom? What’s changed?

The reader doesn’t need to know every detail, but you do. Joanna’s past will affect her future. You may be thinking, but Sue, Joanna’s the type to raise her chin and forge ahead. Fair enough. But her silent keening should still bleed through.

The character should bounce between each stage to mimic real life. A step forward to depression, two steps back to anger, etc.

I like the echo of “It wasn’t supposed to be this way,” but let’s force the reader to feel those words.

It wasn’t supposed to be this way. We had a plan, Tom and I. We had a chance at a new beginning, a fresh start. We had hopes and dreams for retirement. But now, emptiness consumed me, the pit widening more each day. If the movers didn’t expect me in two weeks, I’d never leave Tom’s grave. How did this happen? Why us? We were so careful, so diligent about protection. We made all the right moves. And for what? So I could drive cross-country alone?

Notice I never mentioned what happened to Tom. All readers know is he’s dead, she’s devastated. Let the reader flip pages to find out why. In the next paragraph offer a bit more and get the hero moving.

It wasn’t supposed to be this way. Tom and I dreamed of life in New England, with its snow glistening on autumn leaves, hues of Scarlet, orange, and gold-painted landscapes. Pointless now. Muted shades of black and gray zipped by the driver’s window. Up ahead, a motorist leaned under the raised hood of a minivan. (Or whatever the case may be.)

I added the motorist to accomplish two things:

Delete the part where Joanna introduces herself. It’s the lazy way out. You can do better.

I pulled in behind the van, and a man craned his neck around the side of the hood. Not a female. Crap. I should’ve let Dr. Rosenthal change my prescriptive lenses before I left.

The stranger approached my window. “Thanks for stopping.”

“No problem.” I held a tight smile, jabbed a chin at the van. “What happened?”

“Outta oil. I could use a lift to the gas station.”

Joanna resists. The motorist pushes. Against her better judgment she gives in. Blah, blah, blah. During the drive the conversation turns.

“Really appreciate this.” He blows into cupped hands (the cold signals she’s on the east coast). “I’m Frank, by the way.”

Boom. Now the reader knows her name. Keep in mind, Joanna’s a woman alone. Other than her first name she isn’t likely to tell this stranger her life story.

“What do you do, Joanna?” The way he said my name raised the tiny hairs on my forearms.

Never had my name sounded so creepy. Tom wouldn’t have allowed a stranger in the car. If he were alive, we’d be halfway to Connecticut by now. (See how I slipped in her destination without slowing the pace?)

Frank rested his hand on my knee. “Joanna?”

Mute, my gaze shifted between his hand and the road. “Is the gas station much farther? My husband’s expecting me.”

“Where are you from, Joanna?”

Each time my name rolled off his tongue my stomach somersaulted, flipped, acids splashed against the liner. Damn you, Tom! We vowed to grow old together. You promised to never leave me.

“Michigan,” I lied, unwilling to share details about my route from the west coast to the east.

And on and on it goes. I don’t have room for a line edit, but keep in mind there’s only one space after a period.

The last thing I’ll mention is the raven who materialized out of nowhere. As a die-hard corvid lover, I hope you’re not using the bird as symbolism for doom, gloom, or death. Pets needs a valid role in the plot. If the raven doesn’t fill that need, please consider removing it.

As written, it doesn’t sound like Joanna ever bonded with the family pet, a gigantic bird whose lived in her home for 15 years. It’s odd. When a wife loses her husband, (or vice versa) she clings to any and all traces of him, including his possessions (i.e. Tom’s favorite football jersey, the collar saturated with his scent). A loyal feathered baby should act like Joanna’s life preserver, and not a pet she hardly knew.

Concentrate on the fine art of storytelling, less focus on backstory. Allow readers to get to know Joanna in bite-sized pieces. Force the reader to flip pages. And they will, if you avoid filling in the blanks right away. The inclusion of story questions, conflict, dramatic moments, and hints of danger (valid or misinterpreted) helps to create a compelling mystery that strangleholds the reader.

Thank you for sharing your work with us, Brave Writer. Pandemic stories will flood the marketplace, if they haven’t already. Thus, it’s more important than ever to craft a visceral thrill ride so yours rises above the rest.

Over to you, TKZers! I excluded a few things to avoid turning this post into a book, so please mention them in the comments. How might you improve this first page?