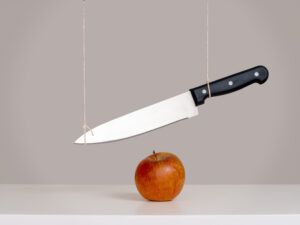 One line leaped off the screen:

“Flash fiction has an almost desperate need to tell a story before it’s too late.”

Before it’s too late? What does that mean? Too late for what?

See what Nancy just did?

Something terrible could occur and you better keep reading to find out what it is.

Although Nancy was talking about flash fiction, the same principles apply to longer works.

Thrillers particularly are known for the breakneck pace that grabs readers by the throat and drags them along as the story unfolds.

But other genres can also achieve that compelling, can’t-put-it-down quality.

How does an author capture that sense of urgency?

In The Canterbury Tales, Chaucer wrote about the Sword of Damocles:

There was a sharpened sword above his head
That hung there by the thinnest simple thread.

Notice how just reading those lines makes you uneasy. That is the quality you want to provide for your readers.

Threats can start out minor but build to major.

Minor: being late to work.

Major: being late to work after the boss swore to fire you if you’re ever late again.

Minor: getting pulled over by a cop

Major: getting pulled over by a cop with a body in your trunk.

Threat level should increase as the story progresses. You might start with a petty annoyance. By the middle of the story, that annoyance has snowballed into a serious problem. At the climax, that problem has led to utter catastrophe for the character.

Threats need to maintain a consistent undertone of worry throughout the story. They may not always be front and center in the action but they should remain in the back of the reader’s mind, nagging and chafing like a popcorn kernel stuck between teeth.

Readers need to feel the thread is fraying and getting thinner with each chapter.

Is your pacing off or irregular? If so, the cause could be that a small threat occurs after a larger one. That causes a dip in the danger, a lessening of tension. Consider rewriting so each threat is progressively worse than the one before.

Exercise: Make a list of threats in your WIP. What is the overarching threat? What are the lesser threats?  Do they build one on top of another, escalating the danger? 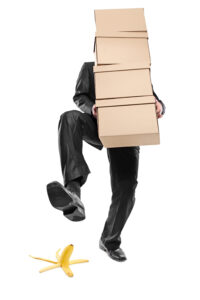 Each scene needs a purpose or goal for the character to work toward.

By the end of the scene, the character has either achieved the goal or failed.

Or, if s/he achieves the goal, that success leads to new unexpected complications.

At the end of each scene, ask yourself what else can go wrong?

Then make it happen.

Use failure or unexpected complications to propel them into the next scene.

Exercise: Analyze the ending of each scene. How did your protagonist fail? How can you make that failure even more devastating?

There’s a reason that chase scenes are a popular device in movies. Pursuits make watchers hold their breath at one moment and gasp at the next.

Just for fun, here’s the greatest car chase ever filmed. To skip the preliminaries, jump ahead to 3:30 for the screeching tires.

Unfortunately, car chases don’t translate well to novels. But the concept of “pursuit” can still be applied. Harking back to #2, the character is in pursuit of a goal.

Obstacles block his/her pursuit of the goal. They don’t have to be as dramatic as the near-misses, biker slide, or shotgun blasts in Bullitt. But they do have to thwart the character and prevent him/her from achieving the goal of the scene.

Exercise: What hurdles must your character leap over? Don’t have a hurdle? Invent one. When the character leaps, s/he can stumble and fall, physically or metaphorically.

A hint: The faster the action, the more the writer should slow down the description. This sounds counter-intuitive but check out a memorable slow-motion scene from The Untouchables.

Exercise: write this scene, using the same pacing and attention to detail that the camera did. In writing, can you include additional sensory details like smell, taste, and touch? 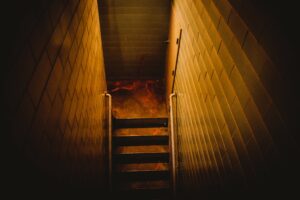 Alfred Hitchcock was famous for letting the audience in on secret knowledge that the character onscreen didn’t know.

Think of ways for the reader to know more than the character does. The character opens a door and descends the basement stairs, believing s/he is on the way to do laundry. But the reader knows the villain is lurking under the stairs.

To accomplish that, you might go into the antagonist’s viewpoint and reveal his/her plans to derail the protagonist. The reader knows but the protagonist doesn’t.

Exercise: In your WIP, do you let the reader in on a secret your protagonist doesn’t know? How? 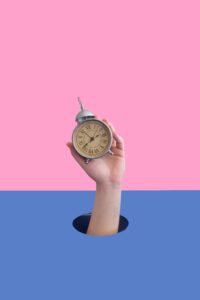 The ticking clock is a standard device to ratchet up tension. But it doesn’t have to be a bomb planted under the baby’s crib, counting down to zero.

Set up a deadline the protagonist must meet. If s/he doesn’t, complications happen, leading to more grief that ultimately could cause him/her to lose everything.

Exercise: If your story doesn’t already have a ticking clock, can you insert one?

Before it’s too late! 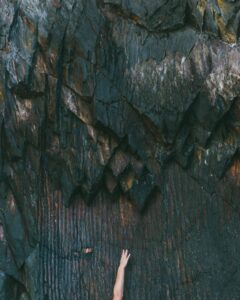 Unanswered questions are great ways to propel the reader into the next chapter. When you end a scene with a question, the reader must turn the page to learn the answer.

But finding the answer to one question isn’t enough. In the next chapter, the author poses more new questions. Again, the reader must turn the page to find answers that lead to…more questions. And so on and so on to the last chapter when the author finally answers all questions and resolves all problems…or not!

Exercise: Study your chapters. Do they end with questions? Can you think of more intriguing ways to tantalize the reader into the next chapter?

Try these six tools to grab your reader’s attention…before it’s too late!

TKZers: Have you used any of these techniques? Do you have other tips to add?

Debbie Burke uses the six tools in the Tawny Lindholm Thrillers with a Heart Series. Quotes from customer reviews: “Getting ready for bed? Don’t start this story!” “Kept me reading all night long.”  “Read it in one sitting.” “Impossible to put down.”