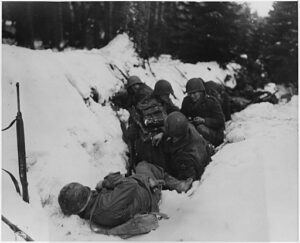 One of my last First Page Critiques for 2019 and of course it is about a dog. Please enjoy this anonymous submission for your consideration – The Young Lieutenant’s Dog. My feedback will be on the flip side, after my thoughts on book introductions.

The history of humanity is held in the fragile palm of our stories. When they are lost, a part of us leaves with them. Perhaps that is why, even as a young child, I treasured the stories my father told us. Although a born raconteur he was, however, oddly reticent to discuss the most dramatic story of his life: his role in WWII.

With an older brother and sister on the cusp of adolescence and I still engrossed in childhood, we were too young to understand the brutality of war. Thus intrigued and naive, we cajoled him mercilessly to tell us about his life in the army during those years, especially when the tales spoke of life-and-death adventures.

Unlike his other stories, which were invariably charismatic and often humorous, those from the war were meant to serve, like Aesop’s Fables, as a moral lesson for his children to learn. I didn’t grasp this until many years later when it was too late and my father was gone, felled by a heart attack. By then, the stories he’d told were either forgotten or punctured with holes, the remaining threads barely clinging to our fragile childhood memories. But one remains, fixed with absolute clarity as if it had been related just moments ago.

I always assumed that I remembered this one because it was about a dog. But, of course, it was much more than that.

In light of the horrendous events of WWII, many have forgotten that in the early years of the war, the United States stood staunchly isolationist. Our country was still struggling to recover from WWI and a cascading depression. On September 3, 1939, Great Britain declared war on Germany. Our President, Franklin Delano Roosevelt, and his staff, watched with mounting concern the steady onslaught of Hitler’s armies and knew that it was not a question of “if” the United States would enter the war, but “when.”

Keys Ways to Begin a Story

There are many techniques to begin a novel – from an intriguing first line that triggers questions in the reader’s mind, to the paragraphs that draw the reader into a mystery or suspenseful action or a compelling story.

A good hook gets to the point quickly to raise a question or shock the reader into reading on. If a story begins in the voice of a narrator, that voice must be intriguing from the start. Successful openings raise unanswered questions or they describe intriguing actions/events or they highlight odd or troubling scenarios of intrigue or suspense.

“I was born twice: first, as a baby girl, on a remarkably smogless Detroit day in January of 1960; and then again, as a teenage boy in an emergency room near Petoskey, Michigan, in August of 1974.” Jeffrey Eugenides – Middlesex

“Whether I turn out to be the hero of my own life, or whether that station will be held by anybody else, these pages must show.” Charles Dickens – David Copperfield

“‘Where’s papa going with that ax?’ said Fern to her mother as they were setting the table for breakfast.” E. B. White – Charlotte’s Web

“The year 1866 was signalized by a remarkable incident, a mysterious and inexplicable phenomenon, which doubtless no one has yet forgotten.” Jules Verne – Twenty Thousand Leagues Under the Sea

“It was a queer, sultry summer, the summer they electrocuted the Rosenbergs, and I didn’t know what I was doing in New York.” Sylvia Plath – The Bell Jar

The Next Paragraphs – Following a solid first line or a quick and compelling intro, the next paragraphs must draw the reader deeper into the story with more questions. This is where storytelling comes in and patience. Make the reader ask, “Who? What? When? Where? Why?” Think about an interesting, seemingly unimportant detail of a character or setting that can become symbolic to your story’s larger themes. In the case of our story for submission, that detail is brilliantly the dog.

No matter how great the first line is, if the paragraphs that follow don’t draw the reader deeper into the story, that great opening is deflated and reads like a gimmick.

Below is an example of an intriguing opening line from Paula Hawkins – The Girl on the Train, followed by paragraphs that draw a reader into the story as questions are raised by the author.

She’s buried beneath a silver birch tree, down towards the old train tracks, her grave marked with a cairn. Not more than a little pile of stones, really. I didn’t want to draw attention to her resting place, but I couldn’t leave her without remembrance. She’ll sleep peacefully there, no one to disturb her, no sounds but birdsong and the rumble of passing trains.

One for sorrow, two for joy, three for a girl . . . Three for a girl. I’m stuck on three, I just can’t get any further. My head is thick with sounds, my mouth thick with blood. Three for a girl. I can hear the magpies—they’re laughing, mocking me, a raucous cackling. A tiding. Bad tidings. I can see them now, black against the sun. Not the birds, something else. Someone’s coming. Someone is speaking to me. Now look. Look what you made me do.

This introduction leads into a morning where the reader meets the narrator – Rachel. It’s a short intro written with patience that raises lots of questions and paints a mystery in the reader’s mind. There are ominous visuals like a secret grave, the disturbing rumble of passing trains, the muddled mind of the narrator, and the bad tidings of magpies. There’s no real action, but since the intro is short and very much to the point, without diversions into backstory, this opening works well.

My notion of critiquing is to provide feedback that’s in keeping with the essence of the story the author submitted. I don’t want to rewrite lines as much as I want to give a 30,000 ft view of the overall beginning and analyze it for impact.

I liked what the author submitted. It was well-written and unfolded a story I would be curious to read, but I wanted to provide an alternative way to take the essence of this story and reorganize it to tell a tighter narrative. I truly want to know about this man and his dog story. I also like the title. It hints at the mystery of the story. Who doesn’t love a dog in wartime story? There are so many ways to parallel the innocence of a dog with the horrors of war and the potential for the redemption of humanity through the eyes of man’s best friend.

My thoughts, without knowing where this story is going, is to intrigue the reader’s mind with questions about the mystery. I also love stories that start in the present, but delve into the past for answers to a mystery. Hence, the ending that implies a grown child had been intrigued enough to dig into his father’s most memorable story to uncover the truth. That definitely would hook me. Why is the dog story the one this narrator couldn’t forget? How will the mystery unfold? Whose life will be changed by the reveal? What’s the journey of this book? The author has teased us with a wonderful mystery with lots of promise. Kudos.

Although a born raconteur, my father was oddly reticent to discuss the most dramatic story of his life: his role in WWII. His tales of life-and-death adventures in the army became an enticing mystery for my brother, sister and I, as curious children. His stories from the war held even more significance after he died of a heart attack years later. After we realized his stories were meant to serve as moral life lessons for his children to learn–like Aesop’s fables–they became a message from the grave that kept him alive in our minds.

One treasured story remained, fixed with absolute clarity as if it had been related moments ago. I never forgot it and always assumed that I remembered this one because it was about a dog. But, of course, it became much more than that–after I uncovered the truth.

As rewritten, this rearranges the original submission to a first line I thought held a particular mystery to pique the attention of any reader. It focused on a story-telling father who played a particular role in WWII that he held back. Why? What role?

I then picked out a tighter narrative with a flow that is more direct and leads quickly to the point of the introduction – to set up the mystery of the dog. I added my own interpretation of the narrator uncovering a truth about the story so the reader gets hooked faster. I also chose to leave out the history lesson in the last paragraph. After the author has the reader focused on a mystery about a dog during wartime, the back story deflates the mystery and slows the pace. That morsel could be saved for later, along with the character development of the surviving children.

As written, this story may leap back into the war to tell the story of a young Lieutenant’s dog. That’s fine too, but if that’s true, why begin with a child’s memory and a son as a narrator? I made an assumption that this story will be woven between the past and the present. I don’t have enough to go on with the first 400 words, but my intention is to show an alternative intro that perhaps is more complicated by weaving in a mystery that straddles the line between past and present.

This story could be like Bridges of Madison County where surviving children uncover a mystery in the life of a deceased parent and the story unravels that truth. That’s my assumption.

The rewrite is similar to the Paula Hawkins excerpt for The Girl on the Train. It’s laser focused on the essence of the story and creates questions in the reader’s mind, before it starts telling the actual story through the eyes of the storyteller.

Please provide your constructive criticism of this compelling submission, TKZers. How do you see this story unfolding?