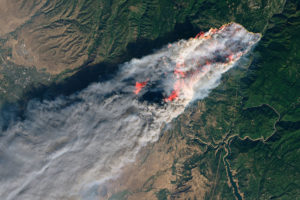 Our nephew and his wife were among those who lost their homes, barely escaping with old family photos and two pairs of pants—the size 36 jeans he was wearing, and the size 28 US Navy trousers that had belonged to his grandfather (my father-in-law) when “Pop” served on the USS Enterprise during World War II.

The fire destroyed countless memories, mementoes, and relics of history—the foundations upon which people build their lives, identities, society, and culture.

Amid the devastation, the Paradise Library remained standing, although damaged.

Beth Zimmerman, a national expert on disaster recovery says, “The library will be a key to providing [survivors] a known place to gather and take time to commune with their neighbors. Libraries can soothe children’s fears and help them cope, especially if they are used to going there.”

When everything familiar and comforting is lost, books can help recreate a sense of safety and security.

Melanie Lightbody, head of the Butte County Library System says, “The library is one of the few buildings which survived and therefore will be even more crucial to the community as it rebuilds. A symbol of possibility and hope.”

Efforts are underway to rehabilitate the structure and contents. Author Phil Padgett is spearheading a pledge drive for books to repopulate the library’s shelves. A former FEMA reservist who deployed to New York after Hurricane Sandy, Phil understands the complex, long-term logistics of rebuilding. 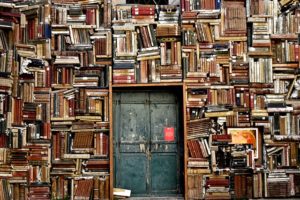 Unlike immediate necessities, such as bottled water, food, clothing, and construction materials, books fall into the category of way-down-the-road work. Yes, they are needed but what do you do with them in the mean time when there is no place to put them?

For now, Phil is compiling a list of authors who have pledged to donate their books. In coming months, he will coordinate collection, cataloguing, and storage. Later, when the library is ready to receive the books, he will arrange for shipping.

Books can be solace in time of tragedy, taking people’s minds off their troubles.

One of the best compliments I ever received came from a reader in Florida. My thriller Instrument of the Devil was released at the same time Hurricane Irma hit. The woman said my book had helped her pass the long, difficult week when she (and millions of others) had no electricity.

As authors, we don’t necessarily run bulldozers or nail up plywood but we can help rebuild lost culture.

If you’re an author who would like to donate to the Paradise Library, Phil’s email is: philip.j.padgett@gmail.com 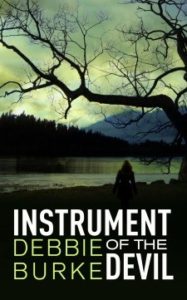 Does your Amazon holiday gift card have spare change left on it? Catch the January sale of Debbie Burke’s award-winning thriller Instrument of the Devil  for only 99 cents. Or read for free on Amazon Prime. Click here.

17 thoughts on “How Authors Can Help After a Disaster”