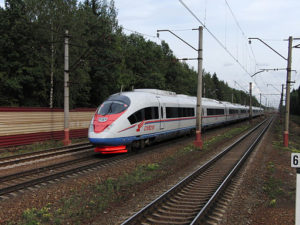 “Raccoon” — an inquisitive legal assistant from Ducklingburg, U.S.A., appeared in the car of a speeding Siberian commuter rail quite unexpectedly.

Appeared being the operative word. Raccoon was not exactly sure how he got there.

A gentle waft of extraordinarily fresh Spring-smelling air shifted and carefully inserted Raccoon’s body into a tight spot between two groups of bulkily dressed people . . . then, before he could get oriented, that same fresh-smelling waft nudged on and pushed him forward, along the swaying length of swiftly moving train, down the narrow corridor with a row of closed compartment doors on one side.

Instinctively, Raccoon steeled his gait — stance wide, head forward, chin in . . . and, finding no grounding point to balance himself, fell in into the closest compartment.

“Score! There you are! Zip! Get here!” whispered Raccoon, leaning down. Losing their best client’s dog would be hard to explain back in Ducklingburg.

The Spaniel lay stiffly in the most unflattering position. Head buried deep under the train bench, black hind paws and short un-wagging tail sticking out on the floor, spread like a dead frog, and Zip’s most embarrassing part — the bright-yellow spot of fur under his tail that made him look like he — was not to careful doing business — was shining in full view.

Not like Zip at all, Raccoon plopped on the floor, sinking feeling in his stomach. Anybody who met Zip knew: Zip would rather die than let his rear side be seen in public.

Raccoon caught a glimpse of red under Zip’s hind paws . . ..

“Zippy?!” Raccoon hunted under the bench, hooked his arm around the dog’s neck and, scooping Zip, pulled gently, cajoling, “Zippy, why are you hiding — come outta — OUCH! Don’t bite!”

Zip whimpered, and scrambled, burrowing deeper under the bench, from where he growled with an unapologetic menace.

“Alive!” breathed out Raccoon, and for the first time, glanced up. “Where are we?”

The train definitely looked like nothing that connected through their native Ducklingburg.

Let’s get to work.

This story appears to be a humorous fantasy about teleportation directed at young readers. The POV character is described as an inquisitive legal assistant named Raccoon from Ducklingburg, USA. He suddenly appears in a speeding Siberian commuter train without knowing how he got there. Kudos to the brave writer for starting with action and minimal backstory.

Animal names set a playful, lighthearted tone but also raise a question: is Raccoon the nickname of a human character or is he actually a furry, four-legged critter with a black mask across his eyes?

In all genres, pictures from the writer’s vivid imagination must translate to the page. In fantasy, that’s even more important because the world is unfamiliar.

Unfortunately, in this first page, the reader feels as lost and confused as poor Raccoon.

A scene in a fantasy world must be made clear to the reader. How does Raccoon know he’s on a Siberian commuter rail as opposed to, say, a New York subway?

The laws of physics in a fantasy world must also be clear.

How does a gentle waft of air carefully insert a person into a crowd? How does it then push him along a corridor? A waft isn’t powerful enough to move a person. Waft means “a gentle movement of air,” so adding gentle is redundant. Perhaps “force field” would be a better term to describe it.

The compartment doors are closed. How does Raccoon physically move through a closed door? Or do you mean a door is ajar and he falls through the opening? Clarify. Delete the extra word: fell in into.

There are too many modifiers—quite unexpectedly; was not exactly sure; gentle waft of extraordinarily fresh Spring-smelling air; carefully inserted. Overuse of adjectives and adverbs dilutes the power of the prose.

You’ve chosen some good verbs, like nudged, hooked, scooping, but they’re used awkwardly. Suggest you simply say nudged, rather than nudged on. Also you don’t need pushed in addition to nudged.

The description of Raccoon attempting to steady himself on the swaying train confused me.

He’s actually steeling his stance, not his gait, which describes movement (walking, running).

Head forward, chin in sounds inherently off-balance, which is how I felt reading this submission. Try physically acting out the movements in order to more clearly explain what’s happening.

Next, Raccoon spots Zip, a spaniel that belongs to an important client. However Raccoon’s dialogue causes confusion.

“Score! There you are! Zip! Get here!” whispered Raccoon, leaning down.

“Score!” is an odd word to use when Raccoon first sees the dog, unless it’s made clear earlier that Raccoon has been searching for him and finally finds him.

“Get here!” should read “Get over here!”

Why does Raccoon feel the need to whisper? Is there someone else in the compartment he doesn’t want to overhear him? If so, you need to show that character.

Losing their best client’s dog would be hard to explain back in Ducklingburg is a good summation of the story problem but seems misplaced. Suggest you move the sentence earlier in the page.

When Raccoon sees blood, he worries Zip is dead. But the dog quickly proves he’s alive by nipping, scrambling away, burrowing under the bench, and growling. At the end of all these actions, Raccoon says, “Alive!” The timing of that exclamation is too long after the reader understands Zip isn’t dead.

Here’s one way the page could be rewritten:

Zip the spaniel was missing. Raccoon, an assistant at the Ducklingburg Law Firm, sat at his desk, wondering how to tell his boss that their best client’s dog had disappeared. He took a deep breath. From nowhere, a smell of spring flowers filled his nostrils.

Without warning, a gust of wind whisked Raccoon from his chair and set him down inside the crowded passenger car of a speeding train. The swaying movement made him stagger. He stumbled into a woman dressed in a bulky, fur-trimmed parka. She glared at him and spoke in a language that sounded like Russian. Outside the train windows, snow drifted across tundra.

Before Raccoon had time to steady himself–let alone wonder how he’d gotten there–the sweet-smelling wind shoved him into a corridor with compartments lining one side. He tried to stop the force by planting his feet but the gust tumbled him like a fallen leaf. He fell through the open door of a compartment, landing with a jolt on the floor, sprawled on his hands and knees.

Under the bench seat, he saw a dog’s hindquarters, stained with red, black rear paws spread out like a dead frog. Raccoon zeroed in on a bright yellow spot that looked as if the dog hadn’t been careful while doing his business—the embarrassing spot under his tail that Zip always tried to keep hidden.

“Zippy!” Raccoon reached under the bench to scoop him out but the spaniel sank sharp teeth into his hand. He jerked back. “Ouch! Don’t bite!” Blood seeped from the punctures. “Thank goodness you’re alive. But what are you doing here?” Dazed and dizzy, Raccoon glanced around the compartment. “What are we doing here?”

Odd punctuation was distracting. Insert spaces between Zip & Milly. The “s” in spring-smelling isn’t capitalized. Semicolons are generally not used in fiction. Try Googling punctuation rules to see when dashes, ellipses, and italics should be used. Here’s one helpful link: https://www.myenglishpages.com/site_php_files/writing-capitalization-rules.php

Be careful with your choreography. Movements have to make sense, be clear, and occur in the correct order that they happen. Action comes before reaction. Cause leads to effect.

I suggest you pretend to be on a swaying train and examine exactly how your body feels as you stagger and fall. Kneel on the floor and reach for an imaginary dog under a bench. When it nips, your arm will instinctively jerk back before you yell, “Ouch!”

By physically acting out the movements, rather than simply visualizing them in your head, you’ll have a better idea how to explain each step to the reader.

Brave Author, your humor comes through. Play up that quality. The story premise is fun. Your description of the dog’s hindquarters “spread like a dead frog” is spot on.

Critique can hurt as much as Zip’s bite. Read these suggestions. Feel free to jerk back in pain and yell “Ouch!” Wash the wounds and put on Band-Aids.

Then come back later and reread. Suggestions don’t hurt as much the second time around. At TKZ, we want to help you make your story as good as it can be.

Your turn, TKZers. Any ideas to help out our Brave Author?

First page critiques work. Shortly after Debbie Burke submitted to TKZ‘s review, her thriller Instrument of the Devil won the Kindle Scout contest and was published.