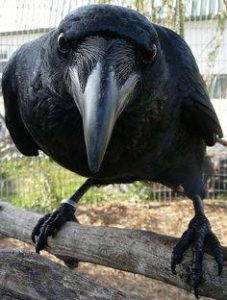 It’s no secret that I’m a huge animal lover. Folks who follow me on Twitter may’ve noticed my interest in wildlife, conservation, and protecting our ecosystems.

When our last two dogs crossed the rainbow bridge, part of me died right alongside them. In 10 years we’d lost eight dogs, seven of which died to cancer and one to a brown recluse spider bite. I longed for another to help fill the void, but my husband couldn’t go through the pain again. I understood. Nonetheless, I still grappled with the lack of pitter-pattering of paws across the hardwood. The house didn’t feel the same.

To help heal, I turned to nature. The woods surrounding our house had to be teeming with life. Surely some little fella needed love.

At the time, I was writing Blessed Mayhem and had studied crows extensively. How hard could it be to befriend a crow?

One day, I piled peanuts on the grass. Circus peanuts, unsalted. In my research I’d discovered that circus peanuts are high in carbs. It takes a high-carbohydrate diet to flap wings. Within thirty minutes, a crow landed in the yard. A bubble of joy burst inside me, a tidal wave of love shattering the protective layer of my heart.

“Poe?” I said, blurring the lines between fact and fiction.

Unlike in my book, my Poe turned out to be female. The only reason I knew this was because a few days later, she brought her mate, Edgar, who was noticeably larger. Poe struts with an unmistakable wiggle to the hips and Edgar acts as the great protector. A real man’s man, if you know what I mean. The proud parents flew peanuts back and forth to their nest … in the woods across the street.

OMG, they had chicks! The helplessness that had consumed me each time cancer stole another dog from us, withered away like lilies in a frozen pond.

Days turned into weeks as I marveled at their intelligence, grace, and loving nature. My husband got swept up, too.

Then we had a new visitor. The Marilyn Monroe of squirrels, this gorgeous dirty-blonde with a swanky strawberry-blonde tail sauntered into the yard. Hesitant at first but making a b-line for the peanut pile. Uh-oh, she could be trouble. Would Poe and Edgar accept her, or would they retaliate for the intrusion?

Since I’d already matched the crow names to fictional pets, why not stay consistent? From that day forward, the sexy squirrel became Shawnee. Then I noticed she was pregnant. If Poe didn’t accept her, how could I ever kick her out? Better lay out two piles of peanuts from now on.

Fights broke out between the two mothers as I bit all my fingernails to the quick. And then something amazing happened. Little by little, day by day, the taunts, lunges, and overall discourse lessened. It’s like they’d struck a deal — you stay on your side of the yard and we’ll stay on ours. With tiny mouths to feed, the kids remained their top priority.

Neither Poe nor Shawnee cared when Hippy joined the party. Hip is a tiny chipmunk who at the time hadn’t even formed stripes yet. Instead, two dotted lines trailed down his back. My heart puddled into goo. Hippy must be the most enthusiastic of his kind. Each time he scores a peanut he leaps a good four-to-six inches into the air, as if screaming, “Hip, hip, hooray!”

Poe and Edgar brought the chicks once they were old enough to fly. Tears teemed my eyes as they taught their babies how to crack peanut shells against the rock. Their beaks weren’t strong enough yet to pry the shell apart. Shawnee brought her babies, too. Two older chipmunks joined Hippy. That was it. No other birds, no other animals of any kind. Until the sun set in the night sky, when Foxy Lady and her kit, Cornelius, ensured the yard was properly licked clean. Jeff, the opossum, and two of the fattest raccoons on record, the Fatty Patty Twins, also helped with the clean-up. Albeit in shifts. The night crew story I’ll save for another time before this post morphs into a book.

Back to Poe, Shawnee, and Hip …

In the yard, I designated a pile of peanuts for each family and they stayed at their respective piles, never encroaching on their neighbor. The two mothers formed the foundation for a mutually beneficial arrangement and everyone played fair.

The nice thing about crows is, they know how to keep a secret. This becomes especially true with places they feed. Sure, they may bring a guest here and there, but it’s a one-shot deal. If the visiting crow(s) try to hang around, Poe and Edgar escort them past the property lines. Crows also aren’t opposed to playing dead next to a consistent source of food, so other crows flying by will think the feast is toxic. They really are smarter than fifth-graders!

In New Hampshire, winters are long and brutal. This fact alone worried me. How would my new fur-and-feathered-babies weather harsh conditions? Little did I know, they worked out a solution ahead of time: me. If it isn’t obvious by now, I’m an easy mark, and they knew it from day one. A tilt of the head, a swish of the tail, and I’m out the door, trudging through two feet of snow. My husband also isn’t immune. Thank God, too, because someone needs to shovel a path for them. He’ll even clear the snow around the bottom of Shawnee’s tree so her feet don’t get cold when she climbs down.

During the same blizzard, Odin, our chatty raven who loves to hang out on my deck railing, sang for his breakfast around 6:00 a.m.

Crows and ravens have an amazing range of calls, which include mimicking other animals. They can even imitate us!

Once the snow arrived, I moved peanut piles up a level to shorten my trek. It seemed like a good idea at the time, but that slight alteration caused a major shift. The waft of peanuts caught the attention of blue jays, who wasted no time in muscling in on the action. Shawnee’s kids had kids of their own, or she’d spilled the beans to one of her squirrel suitors. Between you and me, she’s a bit of a floozie.

The harmony in the yard became a massive feeding frenzy, new squirrels zigzagging around crows, blue jays divebombing from all directions, warring with one another in mid-air while Poe and Edgar played referee. Add in an adorable red squirrel, aptly named Wile E. Squirrel, and I created the perfect storm. Absolute madness unfolds daily around here … but everyone’s fat and happy.

The truly beautiful thing is, Poe and Shawnee still eat wing to tail without even so much as a harsh glance. Even after all this time they’ve never broken that initial vow to put family first. Can’t say the same for their offspring, though. If a baby squirrel tries to take off with one of the suet squares (yes, I cut them into bite-sized pieces), the Poe clan gangs up on the poor little fella. Massive black wings flapping behind you will make anyone drop their stash.

I’ve also witnessed new behavior. Poe and Edgar’s kids – who are huge by the way; they take after their Dad – line up on the lower level, their backs concealed by the skeletal-branches of the bushes. When one of the baby squirrels takes off down the hill with a mouthful of nuts, the wings spread. If he makes it past the defensive line, they soar after him. It’s not like there isn’t enough food to go around, either. I go through 15-20 lbs. of peanuts per week. Maybe stolen food just tastes better.

Spending time with wildlife is one of my favorite ways to relax. Enjoying nature is an excellent excuse for taking a well-needed break from the computer. Thanks to Jim, TKZers know why it’s important for writers to step away from their WIP from time-to-time.

My neighbors probably think I’ve lost my mind … again. Passerby’s certainly do. Twice a day, if I haven’t been beckoned, I stand in the yard, hands cupped around my mouth, and call into the sky for Poe. A caw always echoes in return. Within minutes of closing the sunroom door, the yard erupts – a Coletta family signal that a new day has begun.

It’s impossible to have a bad day when you’re surrounded by tiny paws and talons. Let’s start the week off on a fun note. Do you feed the wildlife around your house? Tell me about the animals in your life.