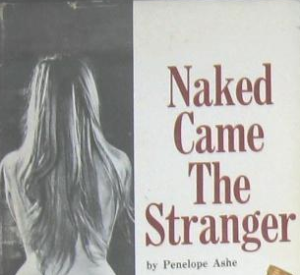 Kris titled her post last week “Naked Came the Stranger,” and slyly didn’t give us the story behind the title. I’d like to do that now, because I well remember one of the most famous literary hoaxes in publishing history.

This was back in the 1960s, the halcyon days of big, trashy novels like Valley of the Dolls and The Love Machine. A Newsday reporter by the name of Mike McGrady, over drinks with some pals, posited that a novel with no social value and even less literary quality could sell, if it was about sex and had a titillating cover.

To prove it, he got a couple dozen of his newsroom colleagues (19 men and 5 women, including two Pulitzer Prize winners) to conspire to write a lurid tome. The simple concept was a housewife having a series of adulterous flings, one per chapter. As the New York Times put it in McGrady’s obituary, “She has sex with a mobster and sex with a rabbi. She has sex with a hippie and sex with at least one accountant. There is a scene involving a tollbooth, another involving ice cubes…” You get the picture. The conspirators wrote one chapter each, trying their darndest not to make the writing too good.

McGrady edited each chapter, blue-penciling anything even approaching a modicum of literary quality.

The project’s original title was Strangers In The Valley, a cross between Valley Of The Dolls by Jacqueline Susann and Strangers When We Meet by Evan Hunter. But a female colleague, Beulah Gleich, told McGrady that the title was no good. He asked why. She said it needed the word Naked. McGrady suggested The Naked Stranger. Gleich said that was too blatant, that the title should have “more class.” Well, you be the judge.

McGrady decided on the pseudonym “Penelope Ashe” and had his sister-in-law pose for the author photo. (On the back of the dust jacket, “Penelope Ashe” is described as a “demure Long Island housewife.”)

He then submitted it to publisher Lyle Stuart, known for “edgy” books. They accepted it (not knowing it was a hoax) and proceeded to design a salacious cover. If you want to see the entire cover (a rather oxymoronic term considering the context) you can go here. (The photo was purloined from a Hungarian magazine, and when the book became a phenomenon, the photographer and model demanded compensation, and got it.)

When Naked Came the Stranger hit the stores, the reviewers hit back. The Village Voice said the book was “of such perfectly realized awfulness that it will suck your soul right out of your brainpan and through your mouth, and you will happily let it go.”

It became an instant bestseller.

After the book reached the 20,000 sales mark, the hoaxers, perhaps feeling a collective pang of guilt, decided to come clean on The David Frost Show. So the joke was over, right?

Um, no. The book sold even faster, spending 13 weeks on the New York Times bestseller list. It has lifetime sales of over 400,000. Open Road Media has the pub rights now.

I remember my mom and dad laughing about all this while looking at a Life magazine story on the hoax, with a group photo of the co-authors. You can see that photo, along with some others (including one of the cigar-chomping McGrady) by going here.

1. In the staid publishing world of the 60s and 70s, if a book was about sex, even if poorly written, slick marketing and a suggestive cover sometimes led to heaving, tumultuous, luminescent waves of febrile, smoldering, incandescent sales.

2. That may happen occasionally today, though it’s much more difficult, primarily because of the roiling sea of content now available.

3. If a book is not about sex and is poorly written, slick marketing and a great cover might drive some initial sales, but with a major drop off afterward. This will be of no help to an author’s career.

4. On the other hand, a really good book will always be held back by a bad cover. That will also be of no help to an author’s career.

5. So if you’re self-publishing, don’t skimp on covers. Where do you find designers? Check out 99Designs and this article by Joanna Penn.

6. A great book with a great cover, all other things being equal, is the best driver of what is far and away the most effective marketing: word-of-mouth.

7. Book after book following #4 is the only sure-fire way of building a writing career.

So, writer, don’t play fast and loose with a one-book stand. Commit to a quality relationship with your work, and take a vow to make that a life-long bond.

Okay, Zoners, let’s have your naked opinion. Don’t be a stranger.