Greetings, TKZers! Another brave writer has submitted a first page for critique. Rather than nitpick, I’ve approached this one a little differently. My comments are below. Hope you’ll weigh in too.

“Did I tell you I knew your father?”

John put on his best fake smile and nodded. “Yeah, you mentioned it when I first came in. You played football together?”

Ralph continued, “Yeah. Hank was one hell of a lineman. In our senior year against Haynesworth, he knocked their quarterback six feet into the air and…”

John couldn’t help but tune out. He’d heard the stories of his dad’s glory days retold hundreds of times with varying degrees of exaggeration. It happens when you live in a small town where everyone knows everyone else. It’s even more common when your father died becoming a local hero. It was bad enough when he was a kid, but ever since John returned home after flunking out of college last month he ran into people every day who felt the need to explain their connection to his father. He knew the story of every guy his dad had ever met or arrested and every woman he dated in high school. He just didn’t expect it during a job interview.

“…the refs decided we would get the point, the crowd went crazy. That victory carried us through the rest of the school year, but I don’t think that quarterback ever walked right again.”

John struggled to picture the large man sitting across the desk playing football. He couldn’t imagine this guy lifting anything heavier than a bowl of gravy since his beet-red face was sweating from the exertion required just to have this conversation. The man had to have had help squeezing his butt between the arms of that old wooden office chair which creaked horribly every time he moved.

John pushed to get the conversation back on track. “Pops, ur…sorry, Poplawski said you were looking for someone to start immediately.”

“The sooner, the better. Jim just walked out on us. No notice or nothin’. He came back from his shift one day last week and took his uniform off right here in this office. Said ‘this job doesn’t pay enough for this kind of shit,’ threw his clothes on the floor and drove home in his skivvies. Can you believe that? Left me in a pinch. I had to go out on his calls for the rest of the week.”

Overall, I liked this piece. Loved the voice too. With a few tweaks, I think this could be a strong first page. Brave Writer has given us a peek into the main character’s background without resorting to a huge info. dump. Paragraph four dances on the edge, but not so much that it pulled me out of the story. We have a sense of who John is and some of the difficulties he’s had growing up in his deceased father’s shadow. Life in a small town isn’t easy, and that’s clear.

I’m a sucker for snarky characters, so I loved this line:

He couldn’t imagine this guy lifting anything heavier than a bowl of gravy since his beet-red face was sweating from the exertion required just to have this conversation.

It may read better if you broke it into two sentences, but I’d rather concentrate on the bigger picture.

What this first page is missing is a solid goal, something the MC needs to achieve more than anything. Sure, he’s applying for a job, but it doesn’t seem like he cares if he gets it. Why, then, should the reader care? Our main character must be in a motivated situation with an intriguing goal or problem to overcome.

The writer may want to save this piece for later in the story, even if it’s used on page two or three, and instead draw us in with a more compelling goal. Or, show us why this job interview is so important to John. Without the job, will he lose his house? Not have food? Is he trying to escape this small town for some reason?

Also, I’m not a fan of opening with dialogue unless it’s used for a purpose. For example, to raise a story question or to intrigue the reader. Dialogue, especially when used as an opening line, needs to sparkle (I’ll show you what I mean in a second). Without context and grounding, we risk disorienting the reader.

Let’s look at an example of dialogue that works as a first line and adds conflict to the entire first page. Maybe it’ll help spark some ideas for you.

The following is from The Burial Hour by Jeffery Deaver. For clarity, my comments are in bold, the excerpt italicized.

Bam! Right off, we feel the tension mounting.

They trooped doggedly along the quiet street on the Upper East Side, the sun low this cool autumn morning. Red leaves, yellow leaves spiraled from sparse branches.

Mother and daughter, burdened with the baggage that children now carted to school.

As if I could ever count on him anyway.

The response from her friend:

Jesus. A tearful emoji accompanied the missive. Why not type the god-damn “o” in tonight? Did it save you a precious millisecond? And remember apostrophes?

“But, Mommy.” A nine-year-old’s singsongy tone.

“A minute, Morgan. You heard me.” Clare’s voice was a benign monotone. Not the least angry, not the least peeved or piqued. 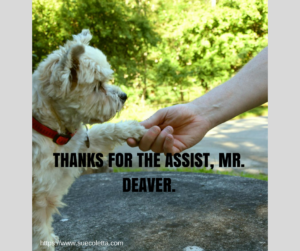 Can you see why this 1st page works? The goal is clearly defined and the main character needs to achieve it. The snappy dialogue between mother and daughter creates conflict. The voice rocks, and the scene hooks the reader. We need to read on in order to find out what happens next. More importantly, we’re compelled to turn the page. Questions are raised, questions that need answers. And that’s exactly what a first page should do. Don’t let us decide whether or not we want to turn the page. Grab us in a stranglehold and force us.

Over to you, TKZers. What advice would you give to improve this brave writer’s first page?

24 thoughts on “With Help from Jeffery Deaver, Let’s Rock This First Page Critique!”