I turned the Big Six-Oh this week, which triggered some of the reflection that big birthdays bring.  Nothing morose, mind you–in fact, quite the opposite.  I wouldn’t go back and live my thirties again for anything.  I enjoy the stability and sense of ease that is my life of the moment.  I’m aware that things can change on a dime, but for now, the view out the windshield is at least as bright and sunny as the one in the rearview mirror. 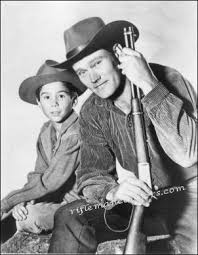 For this week’s TKZ entry, I thought I’d talk about how storytelling has evolved just within my lifetime.  I’ve recently discovered MeTV, a television network for geezers, which runs TV series from days gone by.  I’m particularly taken by “The Rifleman”, starring Chuck Connors as Lucas McCain and Johnny Crawford as his son, Mark.  Truth be told, I don’t remember any of the episodes from when I watched them as a kid, though I do remember the opening sequence with the rapid-fire Winchester.  Thanks to the wonders of DVR technology, I’ve been able to record all of the shows, and in the evening, when I want to unwind before bed, I’ll watch an episode or two.  While the stories tend to be small, the storytelling itself is really quite good.  Sam Peckinpah wrote and/or directed quite a few of the episodes.

In watching those old episodes, I’ve come to realize how much the Westerns of my youth have influenced my storytelling sensibilities.  In fact, it has been said of my Jonathan Grave series that they are Westerns with different costumes.  I don’t know that I would go that far, but there’s no ignoring the kernel of truth, and I think some of those truths take us to the core of what makes a good hero.

A good man (or woman) lives to a code.  Lucas McCain was loyal to his friends, devoted to his son, and committed to helping others in need.  He neither took nor offered charity, but he was always there to offer a job to a man who’d hit hard times and wanted to regain his self respect through honest work.  He never picked a fight, but he never walked away from one out of fear, because he knew that reputations were fragile and that predators needed only the first whiff of weakness to be encouraged.

A good man (or woman) defends what is his or hers.  John Wayne put it best as John Bernard Book in The Shootist when he said, “I won’t be wronged, I won’t be insulted, I won’t be laid a hand on. I don’t do these things to other people, and I require the same from them.” This goes back to the code I mentioned above. The lesson taught by these shows–and echoed through my father as I was growing up–was that there’s no dishonor in losing a fight so long as you fight as hard as you can. As a kid, I repeatedly proved to myself and others that I was not a good fighter, but that experience led me to become a good de-fuser.

Good triumphs over evil, but only after a brutal effort. My cowboy heroes always got up again–if not after the initial fight, then certainly by the end of the story.  And the bad guys always got their comeuppance.

Then came the seventies.  Good and evil became muddled on television and on the screen and in books.  “Injun savages” evolved to “endangered minorities” and the European settlers became the predators.  Modern military service members evolved from defenders of freedom to killers of innocent children. Cynicism raged, and heroes were hard to find anywhere.  Popeye Doyle? Please. Serpico?  Archie Bunker?  No joke was funny, it seemed, unless it insulted someone else in the process.

As a budding writer in college (1975-79), in the age of Rod McKuen and Richard Bach, my admittedly simple view of right and wrong–of hero and villain–was scoffed at by professors and my lit’ry student colleagues.  The professor of one of only two writing classes I ever took told me, “You have no talent, stop writing.” I was only 20 years old.  And it was not some reverse psychology plan on his part.  He was so enraged by my view of good guys and bad guys on the page that he wanted nothing to do with me, and he wanted to discourage me from any path forward.

So, here we are, a few decades later.  Current political screeching notwithstanding, I think we’ve evolved past the blinding cynicism of the ’70s, but it is still there in my writing.  My good guys recognize that in their world, predators have been allowed to thrive as innocents are discouraged from protecting what is theirs.  Fierce independence is frowned upon, in favor of dependence on others, government agencies in particular.  In Jonathan Grave’s world, the police are almost always good guys, but they value their own careers over the pursuit of real justice. Those cops who do take risks on behalf of the innocent are keenly aware that they are one out-of-context cell phone video away from losing everything they hold dear.

The one chance society has in Jonathan Grave’s world is for the noble gunslinger to take that risk that no one else is willing to take. He does it not for himself, but for the benefit of the innocent.  Because he is on the side of the angels.

Come to think of it, maybe I need to give him a Winchester.