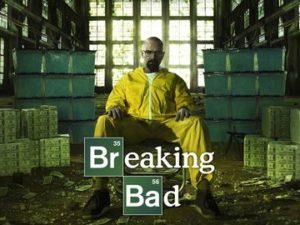 After John Gilstrap’s post yesterday on The Code, a nostalgic reflection on storytelling in his lifetime, it got me thinking about my favorite type of protagonist – the anti-hero.

One of the first “in your face” anti-heroes I remember came from the small screen – HOUSE. He said things we might secretly wish we could and get away with it, but when TV audiences saw how deeply flawed he was, coupled with his vulnerabilities and quirky sense of right and wrong, he became endearing and very watchable.

Here are a few outstanding anti-heroes for your consideration:
Michael Corleone from the Godfather
Walter White & Jesse Pinkman from Breaking Bad
John McClane from the Die Hard movies
Don Draper from Mad Men
Tony Soprano from the Sopranos
Ray Donovan from the show by the same name.
Jack Bauer from 24
George Costanza from Seinfeld
Patrick Jane from the Mentalist
Dexter Morgan from Dexter

These amazingly memorable characters have introduced a broader use of gray into classic Hollywood’s black and white world of storytelling where the bad guys literally wore black hats in early films. Anti-heroes aren’t pure heroes in the classic sense. They have flaws and baggage that make them borderline villain, but not quite. It’s up to the author who creates them to infuse something redeemable, even if the author simply gives them a dog, like JOHN WICK.

So why the change toward anti-heroes and why have they become so intriguing?

You’d have to look at how much our world has changed, the complex nature of our lives has shifted our moral compass and made resolutions ambiguous. The simple white hat cowboy may appear weak unless he’s willing to confront dark villains who aren’t hindered by a moral code. Anti-heroes are “over the top” strong in their field and are willing to break conventional rules to save the day once they commit to the fight and cross the point of no return. They right the wrongs that seem insurmountable because they are larger than life and don’t let rules or laws get in the way of justice.

Why are we drawn to anti-heroes?

For me, I see them as flawed. They’re not perfect, like classic heroes in Hollywood or in literature were portrayed. I can relate to them better because it makes me feel as if, given the right circumstances, anyone can rise to the level of hero if they have a cause worth fighting for. We also want to see if they are redeemable. Give your anti-hero a chance to grab at redemption in your book and see if he takes it. Or will he find love from a strong woman? Once we get hooked on an anti-hero, we root for them and feel their pain more when they fall. We want them to get back up, because they’re “every man.” And the fact they are not cookie-cutter, and do surprising things and are unpredictable, they make the storytelling fun.

Who would have rooted for a high school teacher turned drug dealer if we hadn’t learned of his cancer, his concern for his family in the face of his financial meltdown, and his rising medical bills. He’s bucking a broken health care system like David standing before Goliath. He’s more worried over his family than his own recovery. He’s got nothing to lose.

Anti-heroes change our way of thinking about confrontation and empowerment. The right anti-hero can give voice to our frustrations and give us an alternative reality to find justice.

Below are tips to add depth to your anti-hero/heroine & make them sympathetic:

1.) Who are some of your favorite anti-heroes and tell us why? (from TV, movies, or books)

2.) Do you have any other anti-hero crafting tips to share? 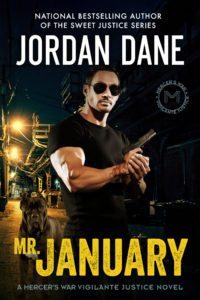 My anti-hero – Mercer Broderick as Mr. January. Preorder ebook for $2.99 at Amazon.

Zoey Meager risks her life to search for her best friend in a burning warehouse, only to cross the path of Mr. January, a mysterious man with a large black dog completely devoted to its master.

23 thoughts on “Anti-Heroes: Why We Love Them & Keys Ways to Give Them Depth”