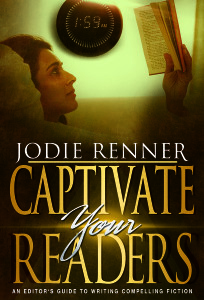 For mundane scenes, it’s best to spare readers the details. We don’t need to know that your character got up, showered, dressed and had toast and eggs before heading off to work. Yawn.

On the other hand, when it comes to significant scenes where your character is trying to escape confinement or otherwise fight for his life, be sure you don’t skip over the details. If it’s a life-or-death moment, show every tiny movement, thought, and action. To increase tension, suspense, and intrigue, milk those crucial scenes for all they’re worth.

Below are some “before” examples, inspired by passages I’ve edited. In each example, including additional detail, such as emotions, physical sensations, and reactions, would be much more effective in bringing the scene to life and keeping readers on the edge of their seats.

I’ve quickly created a possible “after” example for each one to illustrate what I mean, but I’m sure you can do even better.

Setup: Escaping from an insane asylum.

Harley whispered, “I managed to lift the keys. Four in the morning. Get through the woods. I’ll be waiting in a car on the other side.”

Jennifer didn’t sleep at all that night. Four a.m. couldn’t come soon enough. Harley had chosen that time because it was the morning shift change, when the attendants met to discuss what patient problems to look for. After they had settled into the cafeteria, Jennifer ran to the supply room that had an exit door at the other end. The keys worked perfectly, and she was out behind the hospital in less than a minute.

That was way too easy for suspense fiction. Nothing went wrong! Yawn. Let’s try that again:

Harley whispered, “I managed to lift the keys to the supply room. Inside the room, there’s an exit door that leads to the backyard. Do it at four in the morning. It’s shift change, and they’ll all be meeting to discuss the patients. Get through the woods. I’ll be waiting in a car on the other side.”

Jennifer didn’t sleep at all that night. At four a.m., she threw on a robe and crept toward the supply room, flattening herself against the walls and ducking into doorways. She peeked around the last corner. Damn. An orderly was coming out of the supply room carrying towels. Jennifer ducked her head back and hid in a dark recessed doorway, clutching the keys so they wouldn’t jiggle.

She heard footsteps approaching. She held her breath. The orderly passed, engrossed in his cell phone, so he didn’t notice her. She raced to the storage room, glad she was wearing sneakers. Looking around, she tried one key after another, before finally hitting one that opened the door. Yes. She crept in and quietly closed the door behind her, then fumbled for the light switch so she could find the back exit. Just as she saw the exit straight ahead, she heard footsteps approaching. Damn. The orderly must be back. She snapped off the light and tiptoed toward the Exit sign in the dark. She fumbled for the doorknob and found it just as she heard a key in the other door. She yanked out the door and slipped out.

So far so good! But she still has to make it across the back field to the cover of the woods. And did the orderly hear her close the exit door?

Another “before” to continue the same story:

Jennifer looked around. It was pitch black and raining like crazy. With every step, she would sink a few inches into the muck, more walking than running. When she got to the edge of the yard, she searched for a hole in the hedge, then crawled through. She hopped a barbed wire fence and saw a blue Toyota idling on the side of the road. She took off on a run.

My advice to the author of the original version was:

For nail-biting scenes like this, it’s best to have more “showing” than “telling.” Stretch it out a bit here for more trouble and tension and suspense. Also, amp up the tension by adding more danger and threats.

It was pitch black and raining like crazy. And she was in her hospital gown. She started to run across the field, sinking into the muck with every step, more walking than running. Behind her, the door opened, and a male voice yelled “Hey, you! Stop!”

Crap! She picked up her pace, glad she was away from the lights and there was no full moon. As she raced through the soggy field, the mud sucked off one shoe, then another. The alarm started blaring behind her. She limped along, bare feet sinking into the mud with each step.

When she finally reached the woods, she discovered that what from her window had looked like a thin hedge was instead a thorny knot of blackberry bushes. She ran along the edge looking for an opening. At last, she found an opening and crawled through. She ran along the deer path for a while, then stopped. A barbed wire fence. Damn! She carefully grabbed the wires and pulled them up and down, then crawled through with difficulty. She could hear yelling and running behind her. She ran to the road and saw a blue Toyota idling there. She took off on a run.

Here’s another example of adding details, emotions, and reactions to create a more riveting scene. 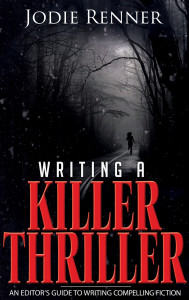 Terry was gone, his clothes were gone, and so was the money. What! She ran down the concrete steps and into the parking lot. The Jeep was gone.

Where was Terry? She called his name. No answer. She surveyed the small room, then checked the bathroom and tiny bedroom. No sign of him. His clothes were gone too. What the–? Did he take the money, too?

Starting to panic, she searched under the bed and in the closet for the bag of cash. She yanked open all the dresser drawers and pulled out the contents, then ran and ransacked the small kitchen and living area. Nothing. Shit! The rat.

She ran down the concrete steps and into the parking lot. The Jeep was gone. Christ. Now what? She stomped her foot and ran a hand through her hair in frustration.

And one last example:

Ken ran down the back stairs. The wind was whistling between the buildings, and it felt like it was twenty below. He finally saw an old beater in the back of the parking lot that wasn’t locked, so he jumped in, hotwired it, and got the hell out of there.

It would be much more effective to show the details of his struggle so the reader can picture what he’s going through and get caught up in it, rather than skimming over and summarizing like this.

Ken ran down the back stairs. The wind was whistling between the buildings, and it felt like it was twenty below. Hoodie up over his head, he darted through the parking lot, trying one car door after another. All locked. Damn! He looked around. A dented beater sat in the back of the parking lot. He dashed over and tried the door. It opened. Yes! He jumped in, hotwired it, and got the hell out of there.

On the other hand, skip any extraneous or distracting details, things the character wouldn’t notice or care about at that critical moment.

Say your two characters, a young male and female, are on the run from bad guys in a large museum or art gallery. They’ll be desperately looking for places to duck into or exits, concentrating on escaping alive. This is not the time to go into detail about the interesting artwork or ancient artifacts around them. Perhaps mention a few in passing as they consider ducking behind them, or for some other reason relevant to their life-or-death situation. Describing their surroundings in detail is not only unrealistic; it dissipates the tension and slows down the pace at a time when they should be charging through at a break-neck speed.

So be careful not to bog down your fast-paced scenes with a lot of detail the characters wouldn’t have time to notice. 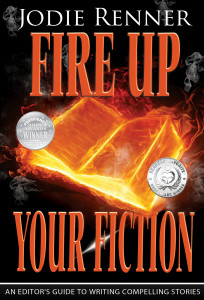 For more tips on pacing your scenes, including how to write effective action scenes, check out my three editor’s guides to writing compelling fiction: Captivate Your Readers, Fire up Your Fiction, and Writing a Killer Thriller.