The year was 1919. The “Great War” was over and the “Roaring Twenties” about to begin. Out in Hollywood Charlie Chaplin, Mary Pickford, Douglas Fairbanks and D. W. Griffith got together to form a new film company they called United Artists.

On September 21, at the Ansonia Hotel in New York City, a cabal of Chicago White Sox ballplayers met to plan how to throw the World Series in exchange for gambling kickbacks.

On April 10, in Mexico, the revolutionary leader Emiliano Zapata was assassinated, never knowing that one day he would be portrayed on the big screen by one Marlon Brando. 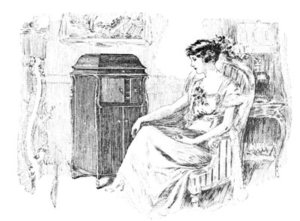 And out of Camden, New Jersey, the Victor Talking Machine Company was shipping its latest model Victrolas, an item that had become all the rage for an emerging middle class. For through this wonderful machine music of all types could be piped right into the living room. Everything from Caruso to Al Jolson, from Beethoven to Eddie Cantor was available for purchase on vinyl discs with a hole in the middle.

All Victrolas sold in 1919 came with a booklet, a little manual instructing the customer how to get the most from their purchase.

Today, when for the first time you have brought a Victrola into your home, we wish it were possible to show you how much this, the most versatile and so the most satisfying musical instrument in all the world, can be made to entertain, to console and to inspire.

To say that the Victrola offers you, your family and your friends “all the music of all the world”—is to dismiss the subject with an entirely inadequate phrase and so this booklet has been prepared to offer certain suggestions for your greater enjoyment of this, your newest and we verily believe your happiest possession.

This was a huge development in our cultural lives in the age before radio became pervasive. Victrola extolled the benefits of music for the weary traveler on life’s highway:

Intimately associated as we are with the development of the Victrola, yet we are fully conscious of the wonder of it and we, no less than our customers, have learned that amid “the daily round of irritating concerns and duties” we have only to turn to the Victrola in order to be once more in love with life and its beautiful, blessed burdens.

And while championing the virtues of classical music, the booklet also recognized the great benefit of simple entertainments:

Art is art, no matter what form it may take, and those who are sincere in their musical opinions will no more despise the lighter and more popular music than they will despise good music which is the product of other kinds of feeling and other rhythms. In certain moods and at certain times there is as much “inspiration” to be derived from ragtime as there is from a Beethoven symphony or the thunderous emotions of a great opera. Each produces its effect in its own way and each supplies a very real human need…

Well said, Victor Talking Machine Company! Let me be so cheeky as to translate this into slightly different terms:

Art is art, no matter what form it may take, and those who are sincere in their literary opinions will no more despise the lighter and more popular books than they will despise literature which is the product of other kinds of feeling and other rhythms. In certain moods and at certain times there is as much “inspiration” to be derived from a thriller as there is from a National Book Award winner. Each produces its effect in its own way and each supplies a very real human need…

And yet … there has always been a tension between the “serious” writer and the “commercial” kind. At times the former may think of the latter as a hack. The latter may consider the former a snob.

Mickey Spillane was the mass-market paperback king of the 1950s. He engendered a lot of envy. (What? Envy among writers? Surely not!) Many “serious” writers were supremely ticked off that their wonderful, years-long-to-write novel of domestic angst only sold 300 copies, while Spillane’s fast-paced Mike Hammer PI novels sold in the millions. Even Ernest Hemingway took a poke at Spillane, in print, which prompted a TV interviewer to ask Spillane if he’d read Hemingway’s criticism. Spillane said, “Hemingway who?” The audience roared (Hemingway never forgave Spillane for that!) As The Mick later put it, “Those big-shot writers could never dig the fact that there are more salted peanuts consumed than caviar.”

Well, friends, there is room for both caviar and peanuts, pheasant-under-glass and bacon burgers. And culinary delights in between. But I happen to believe that the novels that move us most and heighten our perception of life also entertain on a basic, storytelling level. If I’m not fully invested in the characters, or if the plot is a drag, I’m not prone to sticking around for any message.

And pure entertainment deserves an honored place, as Dean Koontz pointed out in How to Write Best-Selling Fiction (Writer’s Digest Books, 1981): “In a world that encompasses so much pain and fear and cruelty, it is noble to provide a few hours of escape, moments of delight and forgetfulness.”

So let me entertain you! And you me! Here’s what I like to see in a novel:

A hero represents the values of the community. An anti-hero has his or her own moral code but is drawn into a conflict within the community. The big question is will the anti-hero transform? Katniss Everdeen is an anti-hero who becomes a hero. Rick in Casablanca starts out unwilling to help anyone (“I stick my neck out for nobody”) but by the end is ready to sacrifice himself for the greater good (“But I’ve got a job to do too. Where I’m going, you can’t follow. What I’ve got to do you can’t be any part of. I’m no good at being noble, but it doesn’t take much to see that the problems of three little people don’t amount to a hill of beans in this crazy world.”)

This doesn’t mean the lead character has to be what we normally call “good.” I root for Richard Stark’s hard-core criminal Parker, because among the other thieves and lowlifes, he has the better argument!

My favorite novels have both levels going on. That’s why I love the Harry Bosch series. We are as invested in Harry’s inner journey as in the case he happens to be working on. Even straightforward action thrillers like The Executioner series are elevated when Mac Bolan pauses to reflect on what all this killing is doing to his soul.

My favorite endings leave me with a definite feeling. One feeling is “Ah…”, a sense of such satisfaction that I feel all the circles have been completed, the outer plot and the inner journey. Usually the ending scene is a personal one. Examples are Lost Light by Michael Connelly, Nathan’s Run by John Gilstrap, and Eight Million Ways to Die by Lawrence Block. These books have final scenes that move me at the heart level.

Stephen King is a master of the “Uh-oh.” As in, something bad is going to happen again! For example Pet Sematary and The Stand.

Kris (P.J.) wrote recently about the ambiguous ending. In the right hands, that can have the same effect as combining the “Ah” and the “Uh-oh.” An example is The Catcher in the Rye.

That’s a phrase I lift from one of my favorite writers, John D. MacDonald. He’s describing a style that is more than plain-vanilla minimalism, yet not so over-the-top that it screams Look at me! I’m a real writer! The latter is where we get the axiom “Kill your darlings.” You can fall in love too much with a felicitous phrase, though I will say that the axiom is a bit too barbaric for my taste. Sometimes I’ll show mercy to a darling, but always defer to the judgment of my true-life darling and first editor, Mrs. Bell.

Give me those things, and you’re liable to turn me from a reader to a fan. And it’s what I hope to give you with each book.

So let me put it to you, TKZers. What entertains you? Do you prefer to feast on one kind of fiction? Do you think one type is “better” than any other? Or do you like a big buffet with lots of choices?

What do you try to put in your own fiction?

The Victor Talking Machine Company’s logo featured a Jack Russell Terrier listening to an “external horn” player, cocking his head because he heard “his master’s voice” coming out of the horn. The name of the dog is “Nipper.” 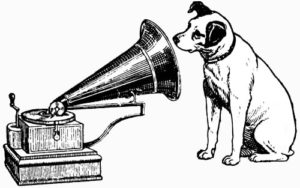 The external horn machine was not a Victrola. Victrola was exclusively used for a model that had the horn inside a nicely designed cabinet, with small doors in the front that opened and closed. There were many fine Victrola designs, like this one: 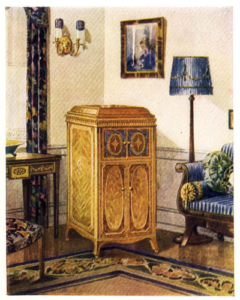