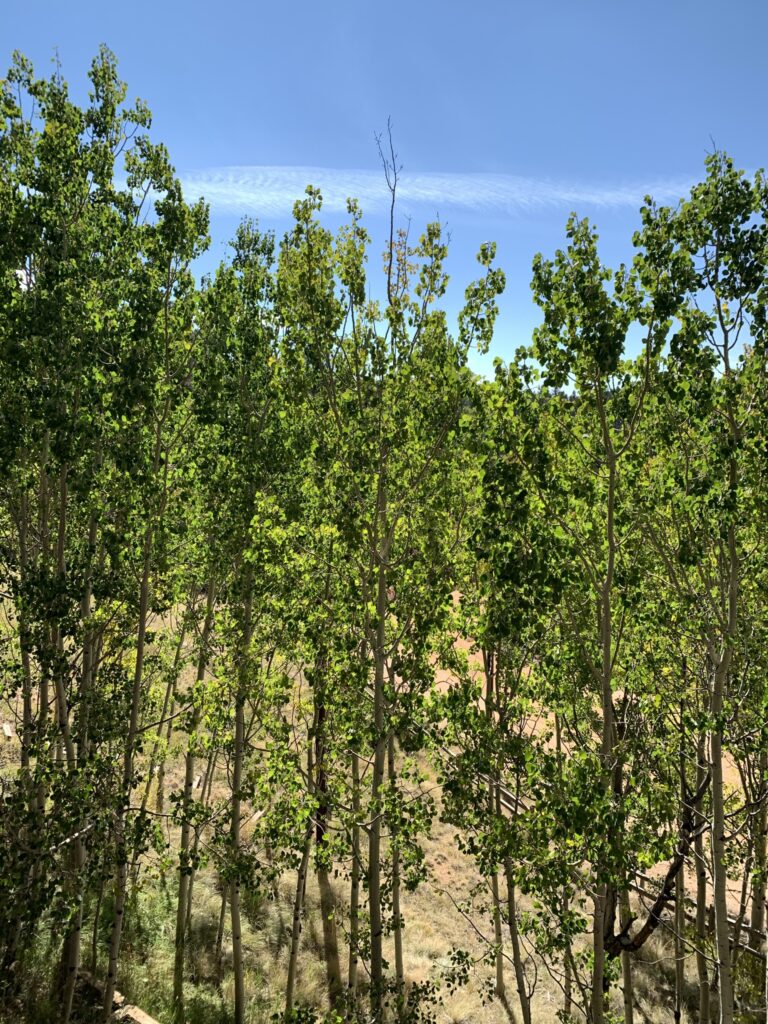 I recall learning about haiku in high school, and being a dismal failure at coming up with anything significant. Quoting from Joyce’s post, “at its essence, a haiku is a short poem that uses an image from nature to evoke a particular season in a particular place, and then uses a break in the rhythm of the poem to juxtapose that image with another image, or to juxtapose two aspects of the central image, and thereby prompt reflection.”

I’m not a poet, not by any means. My in-person critique group in Orlando included two excellent poets, and my feedback was generally along the lines of  “I think a comma here would help.” Not to say I didn’t appreciate their work, but constructing it on my own wasn’t/isn’t in my makeup.

Nevertheless, I gave Joyce’s challenge a try. I looked out my window, and this is what I came up with.

A breezeless morning
Aspen leaves are motionless
I miss the rustling

Not particularly profound, but for the scientist in me, it met the syllable rules, and that was enough.

Joyce’s reply to my offering”

Because aspens are so often used to portray rustling, shifting, motion, using them to portray stillness is very effective for suggesting a strangeness in that stillness, suggesting restlessness in the viewer…

Did I have any of that in mind when I wrote my little poem? Not a bit of it. Did I even “see” it when I read what I’d written. Nope. When I look out my office window, I see aspen trees. That’s what grows there. I didn’t chose the species, or think about what they meant. I admire Joyce’s ability to see beyond the obvious.

Which (circuitously) brings me to the question of writing fiction. We find underlying themes in our books. Do we know what they are when we start writing? Considering the current WIP (a romantic suspense). It took 32 chapters for Kiera to reveal the piece of her past that could destroy her growing relationship with Frank. Frank was nicer; he told me his problem much earlier in the book. Characters’ pasts shape their futures, and can drive the story. For me, more often than not, it’s discovering a theme, and then going back and “filling in the blanks.” Sometimes, when I consider theme, I think I’m writing one book over and over: a character’s road to self-discovery.

Back in high school English, we read and analyzed works of literature. Mr. Holtby was always asking what the significance of this or that was. As students, we asked whether the authors consciously knew this as they were writing. Why did Hemingway decide the old man’s eyes would be blue? If the book is set in Puerto Rico, don’t most natives have brown eyes? And on and on, through many books. Why was the house yellow? Why was the bird an eagle and not a hawk?

Ultimately, Mr. Holtby suggested that as the authors were writing, some words felt “right” and others didn’t. When I was writing my first novel, Finding Sarah, Randy, the hero was coming home from a rough day. He went down the hall, opened the door to a spare bedroom, and sat down at his grandmother’s piano for the first time since she’d died.

My reaction was, “Randy? Why didn’t you tell me you played the piano?” Going back, however, I discovered that there was only one line I’d written that didn’t go along with his talent.

Some authors need a theme before they start writing. I recall a workshop where the author read us passages of her book, and asked us to identify the theme. Not one of us could. Her theme was “Ties That Bind” and she showed the character strapping on a wristwatch, tying his shoes, and I don’t remember what else. But to the participants, these were merely normal actions in the scene.

I have no answers. What about you? Do you see themes? If you write, do you know them beforehand? Do you go out of your way to include actions that speak to the theme? Is it an after-the-fact process, or do things fall into place from your subconscious?