Adding poetry to your writing routine

By Joyce Hooley and Steve Hooley 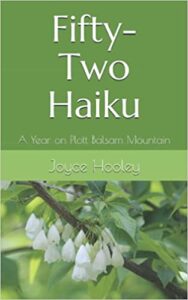 Today we are going to have some fun with poetry, haiku to be specific. We’ll learn the rules for writing haiku and how enjoyable it can be, and maybe even discover that we want to add it to our writing routine. Warning: This post may be addictive.

I was recently introduced to this subject, when my sister published a book of haiku. I did some searching for the rules and quickly found myself distracted, walking around the house with my fingers in the air counting syllables.

In reviewing what has been discussed here at TKZ, in regards to poetry, I found that JSB had discussed epigraphs recently. Six months ago, Clare asked who reads poetry. And Sue keeps us up to date on brain research and psychology. But I didn’t find any discussion on writing poetry, so today is a good day to start.

Our guest blogger today is Joyce Hooley, retired pediatrician who has worked in public health and clinical pediatrics in the U.S. and in Africa. She is a world traveler and has written books about her experiences in the places she has lived and worked. She currently lives and writes in North Carolina. Her recently published book is Fifty-Two Haiku, A Year on Plott Balsam Mountain.

Joyce, thanks for joining us today and introducing us to writing Haiku.

Most people, when asked about haiku will offer a simple definition: it is a poem written in three lines with a total of seventeen syllables. The first line, they will tell you, must contain five syllables, the second seven and the last five. But that definition does not capture the spirit of haiku. More accurately, at its essence, a haiku is a short poem that uses an image from nature to evoke a particular season in a particular place, and then uses a break in the rhythm of the poem to juxtapose that image with another image, or to juxtapose two aspects of the central image, and thereby prompt reflection. Haiku originated in Japan where it was intended to evoke Buddhist reflections on nature. But with this juxtaposition of images, haiku can also contain the elements of the most basic story: a subject (encapsulated in an image,) and a transformation (encapsulated in a juxtaposition.) It is for this reason that writing haiku can be such a great exercise for any writer. It is a method for sharpening focus. What am I trying to say? Can I distill it to a vivid image and one revealing transformation or contrast?

Haiku evolved from a 13th -14th century Japanese poetry form, a hokku, which was the beginning verse of a rengu, a longer poem written by two or more poets in collaboration, line by line, back and forth. It was not until the 19th century that the term “haiku” was used to refer to the evolved form. Matsuo Basho was one of the most famous of the early writers of haiku. Below are a few examples from his approximately 1000 haiku. Notice that, translated into English, these haiku no longer contain seventeen syllables.

Crawling up my leg.

Mingles with the voice

drills into the rocks.

I wrote my recently published collection, Fifty-Two Haiku: A Year on Plott Balsam Mountain, in the year 2010. As I went about my daily activities that year, my walks through the woods and my garden chores, I challenged myself to stay present to each moment, alert for an image of the season that would inspire a haiku. I jotted down descriptions of sensory images that caught my eye, or ear, or nose, and kept these in a small notebook. I was still practicing pediatrics at the time, but I had Mondays off and each Monday morning I sat down and composed from one of the most compelling of the images. The rest of the week as I had time, I edited, tweaked, and played with the poem. It was, for me, a form of the discipline that Julia Cameron, in The Artist’s Way, calls her “morning pages.”

The practice greatly elevated my days. Robert Haas, in his introduction to The Essential Haiku, Versions of Baho, Buson, and Issa, (Harper Collins, 1994) wrote that when Buson, the great mid-eighteenth-century Japanese poet, was asked by a student if there was a secret to haiku, he replied, “Yes, use the commonplace to escape the commonplace.” I was not trying so much to escape the commonplace as to dwell in it more fully, to be alive to it, to relish it. Writing haiku helped me to pay attention.

Thanks, Joyce, for a great discussion on haiku.

Okay, TKZ community, now it’s your turn with any comments or questions for Joyce.

And then it’s time for you to try your hand at haiku. Put on your thinking caps, look around, find a sensory image that distills the essence of what you are experiencing, and transform that image into a haiku. So, lay down your pencil, get your fingers in the air, maybe get out the thesaurus, and start counting syllables. Let’s get those neurons firing and create some poetry. Where else can you write poetry and have it published in the same day?

After Jim’s recent discussion of epigraphs, and learning about haiku, it struck me that we could write our own haiku epigraphs for our books. Written by us, totally unique, and custom made for our book. An epigraph in three lines.

The assignment for today: #1 or #2, and an introduction:

Here’s my nature haiku as we cut firewood for winter heat:

submits to saw and splitter