I’m traveling today through another dimension, a dimension not only of sight and sound but of mind. A journey…wait a minute. Let me begin again. I kind of feel the way that I did the first time I walked into a Rocket Fizz store a couple of years ago and saw all sorts of different brands of candy that I hadn’t seen the 1960s.  I’m not talking about candy, however. I’m talking about books. To be more precise, I’m talking about buying books through the mail, long before something called “Amazon” became a business.

This feeling occurred while I was trying to decide what to write about for my blog post this morning. That would be the one you are reading right now. I had four — yes, four — different topics going but they all each and all kind of meandered into nowhere. I got on a tangent involving how the science fiction genre has changed and got nostalgic for The Science Fiction Book Club (SFBC). Those of you of a certain age will remember book clubs. There was Book of the Month Club, SFBC, and the Mystery Guild (MG). There might have been a club for romance books as well. I belonged to the SFBC for almost fifteen years, from the mid-1960s to the early 1980s. It was easy to join. You perused an ad insert— usually in a science-fiction magazine — tore it out, filled out a membership card, selected a certain number of books for a few dollars plus postage, and mailed it and  your check to the club. You agreed to buy two or four books at the regular price sometime over the following two years. Every three weeks or so you were sent (there was no email in those days, no Amazon, no internet, no cable television) a catalog offering two feature offerings, a backlist, and a few exclusive three-in-one volumes or some such thing. If you wanted the two feature books, they made it soooooooo easy! You didn’t have to do anything!  You just waited and the SFBC would send you the books. If you didn’t want one or both of them, however, the cat was on your back to send a pre-printed card back by a certain date, affirmatively stating that you didn’t want the books. The card also gave you the opportunity to order other books if you wished. It was kind of an honor system. It was cool, but it was also a bit of a pain to send the cards in on time. If you didn’t do so for a couple of months your front porch soon resembled that of Mickey Mouse’s in “The Sorcerer’s Apprentice,” except with books instead of brooms. I kind of lost interest in the whole concept when the science fiction genre began to change and while the idea of The Mystery Guild was intriguing I was kind of sour on the whole mail order thing. I could pretty much get whatever I wanted from bookstores. I quit hearing about book clubs and the like in the 1990s and assumed they had gone the way of the phone booth.

And I was wrong!

I discovered not one-half hour ago that the SFBC and MG have bravely and mightily soldiered on, in updated fashion. They both have changed a bit. No more catalogs, and no more honor system (you submit your credit card information when you join). They do have a couple of enticements to get you to join and to remain a member, and, most importantly, to continue buying books. I have to give them credit for staying with the mail order game for books. I mean, after all, that they had a hand in creating the concept of books and with The Book of the Month Club more or less ruled the territory, until ol’ Chrome Dome from Seattle,, genius that he is, kind of moved in and took over the sandbox. Both clubs continue to stake out their genre niche, however. You can access the Mystery Guild website here and the Science Fiction Book Club website here.

I’m kind of wondering…why don’t more readers talk about this? Why don’t I see more of a MG presence at reader/author conventions like Bouchercon and Thrillerfest? Or are they there and hide when they see me coming? Is the fact that these businesses have continued to operate well known to everyone but me, kind of like the Channel Zero anthology on the SyFy Channel?  And…if you don’t feel like answering those questions…tell me if you would one or more things that you loved as a child (or teenager) that you thought was gone forever, but have discovered is still around. Please. And thank you. 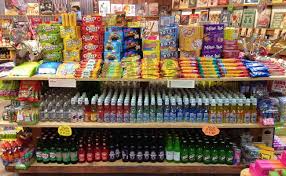 There is a nationwide chain of stores named “Rocket Fizz.” We have had one in the Columbus area for a little over a year. It’s not on the Weight Watchers approved list, for sure, which means that it is a fun place.  I have watched people walking by the place who seem to hit an invisible shield when they see the front window, which promises a party inside. They come in, too. The store layout gives you an excellent idea of what Rocket Fizz is all about from that first glimpse inside. The front has candy that I haven’t seen in a half-century or so, items like Bonomo’s Turkish Taffy, Sugar Babies, Teaberry Gum, and Bit O’ Honey. The periphery displays all freaking sorts of bottled soda (Judge Wapner has his own root beer. Who knew?),  taffy (about fifty or so different flavors), posters, tintypes, toys (I almost — almost — laid down thirty bucks for a set of Teenage Mutant Ninja Turtles beanie babies), and novelty pranks that will remind you of what you do in your office when no one is around (you’ll know it when you see it).  There are tables piled with merchandise but none higher than five feet or so, the result being that even someone of my very normal height can see the entire expanse of the establishment from the front door. The back of the store displays all sorts of imported items like Japanese Oreos (those folks know how to do Oreos) and English toffees and chocolates of all types and configurations.Wonders beckon.

I take my granddaughter, the eight-year old antichrist, to Rocket Fizz on occasion. While she is respectfully prowling the place, looking for new opportunities for me to spoil her, I like to stand in the corner of the store furthest from the entrance and watch people as they come in. The face of each and every person lights up as they break the plain of the front door. This is true even of grumpy old me, and it’s true every time I visit there.  It’s pure entertainment. A youngster sees unfamiliar types of candy that looks like fun; those of us whose boots first hit the ground in the middle of the last century remember going to the drugstore and paying a quarter for a box of Fizzies (yes, they have those too, and no, they aren’t a quarter anymore). You hear lots of “Oh wow!’s and oohing and ahhing from people of all ages as they walk through. I have never seen anyone step inside of Rocket Fizz and turn around and walk out. No. They walk in, going deeper and deeper. They spend time and yes, they spend money.

Someone did a lot of work figuring out what would work for Rocket Fizz, and it shows. There are fifty odd Rocket Fizz stores scattered across the country and that number will double in a year or so.. I don’t know if the people who came up with the concept of Rocket Fizz sample their own wares or not, but they want their customers to be happy and have fun and hopefully spend money. And we, as authors, can learn from that. I sometimes forget who I am writing for and have to remind myself that if I am writing for me then a diary would serve the same purpose. If I am writing for someone else — or a whole bunch of someone else’s, hopefully — I need to make my book attractive to my audience, not just to me. “I couldn’t get him to stop screaming” is a stack of twelve ounce cans of cola by the front door; “He kept screaming. He didn’t stop, even when I caved his head in” is a twelve ounce glass bottle of Mighty Mouse Blue Cream Soda, made with real cane sugar. It attracts attention, and makes the reader wonder who, why, and next. As far as that next thing goes…you don’t want displays of generic animal crackers. You want gold foil chocolate coins or candy flavored cigarettes (OH, THE HUMANITY!) or Star Wars JellyBellys. This is where you start introducing characters, which you can base upon everyone from the uncle no one ever wanted to sit by to the really, really strange woman who works in the produce department of your local supermarket who won’t meet your eye and just points to what you want. As for your ending…you want exotic. Endings are dessert, at the back of the store. A creme sandwich cookie is okay, but what does a small box of double-fudge covered Oreos with Asian lettering all over it say to you? It says that it’s something familiar, but different. It’s at the back of the store, and is more interesting than anything that came before it. That’s what you want to shoot for. Even if, like me, you miss more often than not. You can’t hit something if you don’t fire.

Have you read anything recently that puts you in the mind of Rocket Fizz, as described? I have a couple of examples, one being THE HOT COUNTRIES by Timothy Hallinan, the latest and best in his Bangkok-based Poke Rafferty series. The other is THE GOLEM OF PARIS by Jonathan Kellerman and Jesse Kellerman, the genre-bending sequel to last year’s THE GOLEM OF HOLLYWOOD. It has it all, from exotic locales to explosions, romance, history and religion. And if you haven’t read anything recently that fits the bill…do you have a Rocket Fizz in your city? Have you been there? What did you buy?