I’ve been hearing a lot in recent weeks about the state of publishing today – especially about the general sense of ‘flux’ and uncertainty as well as the lingering sense of trauma following the pandemic. This particular issue came up recently on social media when a writer demanded on Twitter (never a good thing…) why agents and editors seemed particularly slow in responding to submissions at the moment. This set the stage for a flood of responses from those in the publishing industry reiterating just how traumatic the pandemic had been for many of them – stemming not only from the lay-offs and economic uncertainty, but also coping with working from home (often with young children), and generally being in the midst of a confluence of horrors and illness which affected everyone’s ability to focus.

Now, as we pass the mid-point of 2021 many in the industry are still struggling to catch up with the backlog of work and trying to regain a sense of normalcy after the pandemic upended so much within the industry. Reading this Twitter thread was both reassuring (given my own creative struggles during the pandemic), as well as terribly sad (so many people still trying to come to terms with their experiences last year). What was unnerving/shocking (although given it’s Twitter also inevitable…) was the number of negative responses (even from writers!) criticizing agents and editors as if they should somehow not have any human frailties… Witnessing this whole exchange on Twitter made me wonder about what others were experiencing when it comes to the publishing industry at the moment, whether they see a ‘reset’ any time soon, or whether we are really just in the throes of a kind of post-traumatic syndrome that may take many more months to overcome.

Some of my fellow writers have received a fair bit of ‘doom and gloom’ talk from their agents and editors (though to be honest I say ‘so what’s new?!’) so I thought I’d reach out to our TKZ community to see what your experience has been so far in 2021. Are your agents and editors still reeling from the pandemic? Are submissions or responses to queries taking longer than normal? What feedback have you got from those in the industry about the state of things at the moment?  One interesting tidbit I’ve heard is that many publishers are now looking for projects that they feel they can sell to Netflix for a future movie/TV show – I’m assuming because of the success of the recent Shadow & Bone series perhaps…??…anyway not sure if anyone’s heard this…

For those of you out there in TKZ with their fingers on the pulse, what are you hearing about the state of publishing at the moment?

I’m going to dive right into 2019 by raising the tricky and controversial topic of what I’m calling ‘morality and the modern writer’. I’d been mulling over aspects of this issue ever since the MWA controversy over Linda Fairstein, when yesterday (quite serendipitously) the NYT published an article entitled ‘Must Writers be Moral?’. This article got me thinking (again) about how we deal with, and differentiate between, the actions and ‘morality’ of an artist as opposed to their work. In the Fairstein controversy, the MWA withdrew her Grand Master award following an outcry over her involvement in the infamous Central Park Five case. While I don’t intend to discuss this particular case in any detail, it highlights the very public way we are now seeing the line between art and artist play out in society today.

The NYT article (a link to which is provided here) adds a further dimension to the discussion by highlighting the increasingly widespread use of ‘morality’ clauses in publishing agreements today (something, I must admit, I was completely unaware of!). The article details the use of clauses that release publishers from their obligation to publish a book if (in the words of a Penguin Random House contract) “past or future conduct of the author inconsistent with the author’s reputation at the time this agreement is executed comes to light and results in sustained, widespread public condemnation of the author that materially diminishes the sales potential of the work.” Some contracts go even further, requiring authors to return advances should their contract be terminated. As this article outlines, even though publishers’ concern over the marketability of their authors is understandable, the issue of ‘immorality’ can be a slippery concept (especially if the publisher has sole discretion over determining an alleged infringement) and, when it comes to public condemnation, often a moving target. Some prominent writers, such as Masha Gessen, have refused to sign these clauses arguing that there is too much ambiguity involved in these kinds of ‘morality’ clauses, not to mention concerns over censorship as well as public vitriol.

In 2018 there were some very public book cancellations (most notably Milo Yiannopoulos) and scandals involving authors such as Junot Diaz that reflect the post #MeToo era. While I don’t want to engage in a heated discussion about these particular controversies, I am trying to get my head around the distinction (especially when it comes to ‘morality’) between the artist/writer and their work. Any student of literature knows that many famous writers were hardly angels – instead history is strewn with womanizers, drunks, addicts, racists, anti-semites, misogynists..and the list goes on. So how do we separate the person from his or her work? Should we judge an artist solely on their works or is the work inextricably linked to them as people (and thus, their behavior and attitudes)? In the current publishing environment it seems that writers are being held up to scrutiny in both their professional as well as their private lives.

So TKZers, what do you think about these so-called ‘morality’ clauses in publishing contracts? How do you view the distinction between a ‘writer’ and his or her ‘work’? Is such a distinction even relevant in today’s social media age? 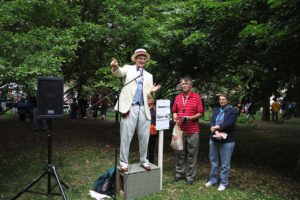 What do you see as an unethical practice in the publishing industry? Are there any? Too many for one blog post? The soapbox is yours.