Happy New Year, everyone!  Yeah, I know the year is two weeks old, but this is my first post of 2020.

If you’re familiar with the Grave books, that black Lab you see in the picture is the real JoeDog.

This picture of tossing money in the air was the single greatest mistake in the run-out of the book. It alienated most of our neighbors and all of our families.

It’s been a quarter of a century since HarperCollins published my first novel, Nathan’s Run.  (Why does “quarter of a century” sound so much longer than “twenty-five years”?)  The sale made big news in 1995 and upon its initial release, Nathan earned starred reviews in the Big Three of pre-pub review outlets, Publisher’s Weekly, Kirkus and Library Journal.  People, Entertainment Weekly, Redbook and Washingtonian magazines all ran features on me and the novel.  Even Liz Smith and Larry King talked about it.  A year before it was published, Warner Brothers snatched up the movie rights in a seven-studio bidding war, and foreign rights were sold in 23 countries around the world.  The American Library Association subsequently name Nathan’s Run as the winner of the Alex Award as the best adult-market fiction for young adult readers.

I still hear from people who read the feature story that Writer’s Digest wrote about my rookie year windfall.  It was a hell of a way to launch a new career!  Hand to God: At the time, I had no idea how unusual my experience was.  After all, there was no user-friendly internet yet, at least not in my house, and the only other author I knew at the time was Stephen Hunter, who had just come out with his runaway bestseller, Point of Impact.

Nathan’s Run did what it did, and more books followed, but ultimately, the novel went out of print, and in 2007, give or take, all rights reverted to me.  By then, I had just launched my nonfiction book, Six Minutes to Freedom through Citadel Press, an imprint of Kensington, but my Jonathan Grave series hadn’t yet made it to the page.  I essentially was between publishers and between deals, and really didn’t have a place to put a re-release of Nathan.  So, I sat on the rights for a while.  Well, most of the rights.  Over at Recorded Books, George Guidall’s narration of the unabridged Nathan’s Run, had done well for them, so I inked an independent deal to re-up the audio rights with them.  For about four or five years, then, Nathan remained in “print” only as an audio book.

In 2012, having established a nice track record with Kensington through the Grave series, I floated the idea with my agent that we re-sell Nathan to Kensington.  They jumped right on it–along with At All Costs, my second novel (1998) and the first to introduce Irene Rivers, then an FBI agent, and in the Grave books the director of the FBI.  They were very clear during the negotiations that they were mainly interested in publishing the new Nathan as an eBook, and I was fine with that.

And now, effective December 31, 2019, Nathan’s Run is once again available as a premium mass market paperback.  Better still, it’s the “director’s cut” of the story.

I think I posted here before about my decision not to rewrite the story to reflect my storytelling choices of today.  I like the idea of it reflecting my voice and world view at the time I wrote it.  The only changes I made from one version to the next is to clean up the language.  Nathan Bailey, the protagonist of the story is 12 years old and he’s on the run from people who want to kill him.  In the original, when I was in the POV of the bad guys, the narrative language was pretty harsh.  That, combined with the Alex Award, which brought the book into middle school libraries, ultimately led to it being named as one of 100 most banned books in America.

I received a ton of letters and emails from readers who were disappointed that the language prevented them from sharing the story with their kids or their parents of their minister.  So, when I had the opportunity, I cleaned the story of F-bombs and other high-end profanity.  Truth be told, I haven’t dropped an F-bomb in my fiction in over ten years, and no one has ever complained.

The other most frequent topic for complaints from otherwise satisfied readers was the ending, which they felt was too abrupt.  Yeah, me too.  Whereas my original ending–the one I submitted when the publishers bought the book–ended in short coda that tied up loose ends, my editor and agent at the time felt strongly that a degree of ambiguity in the end made the story better.   I never agreed, but it was my first book, and I was dizzy from the whole experience, so I said okay.  I’ve regretted it for 25 years.

So, now, Nathan’s Run ends the way I originally wanted it to, and I think it has legs for young adult readers as well as fans of my thrillers.  There’s also an author’s note at the end that explains a lot of the behind the scenes stuff.  For example, I explain how Nathan Bailey got his name. 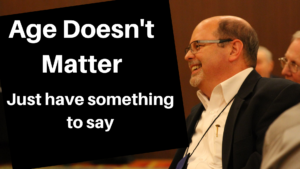 Now, in an awkward segue, since this post is all about shameless self-promotion, I’m happy to announce that my YouTube channel, A Writer’s View of Writing and Publishing in closing in on 1,900 subscribers and over 75,000 views.  The channel features short videos (most are 6-8 minutes long) that talk about how the publishing industry works, and provides tips for writers to navigate the waters.  If you get a chance, please pop over and give it a look–and subscribe if you like what you see.