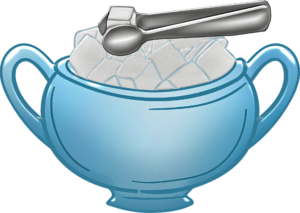 The other morning, as is my wont (and I want what I wont when I want it) I took a fresh cup of joe and my AlphaSmart to the backyard for some thinking, pondering, and writing time. The joe was brewed in my moka pot, a gift to mankind from the Italian inventor Alfonso Bialetti. Usually I take it black, but we happened to have some Coffeemate Sweet Italian Cream in the fridge. I thought the key word was Italian, but as it turns out the emphasis should be on sweet. This stuff is a sugar bomb. You need less than a dollop of regular cream. My hand trembled, and I poured in a touch too much.

Which almost ruined the coffee. I soldiered on, but the enjoyment of the brew was lessened considerably.

Which naturally got me thinking about this as a metaphor for writing.

Emotion in our fiction is a sweetener. In the right amount it makes the story beautiful and tasty. Too much can ruin it.

So the trick is putting in just the right amount. But how do we measure?

There are ways around both these mistakes.

Let’s begin with the basic premise that what’s going on inside your Lead is of abiding interest to your readers. They want to know about the emotions, not just the actions.

The latter component, action, is what the great writing teacher Dwight Swain called scene. The former he called sequel. There’s a definite structure to both.

A scene is made up of Objective, Obstacles, and Outcome.

A sequel is Emotion, Analysis, and Decision…the Decision leading to the next action scene.

Jim Butcher has said that the key to the popularity of his Dresden Files is sequel:

This basic structure for sequels is pretty much the ENTIRE secret of my success. I do it like this in every freaking book I write. I know it works because check it out. People like my books. They like them for some of the special effects, sure, and for some of the story ideas sometimes–but mostly it’s because they find themselves caring about what happens to the characters, and that happens in sequels.

For more on this, see the definitive text on scene and sequel by Swain disciple Jack Bickham.

There are times when telling the emotion is fine. I have a little “intensity scale” in my brain which measures the intensity of a moment. When it’s relatively low, I tell. When high, I show. Here’s what I mean.

A woman is slightly worried when her husband hasn’t called for a couple of hours. You might tell it like this: A trickle of worry hit Pam. Usually Steve would let her know if he was going to be late. There is no need to go into the physiological effects of worry on her body. The moment isn’t intense enough.

But what if she doesn’t hear from him that night? Or the following day? Now it’s intense, so you show: Hands trembling, she punched the number for his office. When the receptionist answered Pam’s throat clenched like a fist clutching her vocal cords.

Now, when you got to those big emotions, I have a suggestion. This can be done as you write, or you can do it when you edit your draft.

Open a new document and do some focused freewriting on the emotion. This means you don’t stop and edit, you just let it flow. Write in the POV of the character. Let the character tell you how she’s feeling. Let her go on and on, giving you the color of it, the taste of it, the metaphors of it. Do the most obvious feeling first, but then go on to another emotion, one you didn’t anticipate at first. Maybe even the opposite emotion. We’re a tangle of complexities, and that’s what makes for compelling characters, too.

Set that document aside for fifteen minutes. Come back to it and pull out the best parts, the parts that are most gripping and original. Put them in the book.

From the hardest of the hardboileds, Mickey Spillane, comes his PI Mike Hammer in One Lonely Night. Hammer’s backstory includes heavy combat in WWII, lots of kills, and what we would today call PTSD. He deals with his ghosts by shooting bad guys and boozing. So when a judge rakes him over the coals in front of a crowded courtroom, calling him a lowlife killer who doesn’t belong in a civilized world, Hammer can’t forget it. As he’s driving he gets a look at himself in the rear view mirror, and hates what he sees.

I used to be able to look at myself and grin without giving a damn about how ugly it made me look. Now I was looking at myself the same way those people did back there. I was looking at a big guy with an ugly reputation, a guy who had no earthly reason for existing in a decent, normal society. That’s what the judge had said.

I was sweating and cold at the same time. Maybe it did happen to me over there. Maybe I did have a taste for death. Maybe I liked it too much to taste anything else. Maybe I was twisted and rotted inside. Maybe I would be washed down the sewer with the rest of all the rottenness sometime. What was stopping it from happening now? Why was I me with some kind of lucky charm around my neck that kept me going when I was better off dead?

That’s why I parked the car and started walking in the rain. I didn’t want to look in that damn mirror any more. 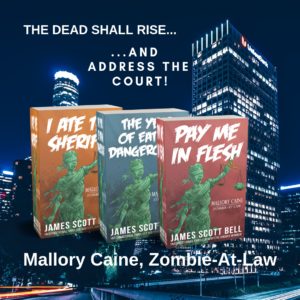 In keeping with last week’s post on risk-taking and writing what pleases you, I’d like to tell you the story of a dead lawyer.

Back in 2008 my agent, Donald Maass, and I were at a writers conference in the midwest. One evening we slipped away for a beer to talk new ideas. Pride and Prejudice and Zombies had just come out was going wild. I was thinking, why not combine zombie fiction with a legal thriller? And to make it more interesting, let’s have the zombie be the hero, a lawyer practicing in L.A. What if this lawyer specialized in defending outcasts like vampires and werewolves? Maybe Frankenstein’s monster has been denied health insurance because of a pre-existing condition.

We started laughing, and then Don said, “Write up a proposal.”

So I started my development process. All I knew was that I wanted to write in the hard-boiled tradition I love and make them true legal thrillers with a paranormal twist (example: if a vampire is accused of murder, doesn’t she have the right to have her trial held at night so she can be present in court?). I was inspired, too, by the mashup vibe of the Harry Dresden books by Jim Butcher.

Things started bubbling, and I came up this concept:

In L.A., practicing law can be hell. Especially if you’re dead.

In an increasingly hellacious L.A., zombie lawyer Mallory Caine defends a vampire hooker accused of the crime Mallory herself committed, even as a zombie-killer closes in, and the love of her former life comes back as the Deputy D.A. she must oppose. At the same time, Lucifer begins setting up L.A. as his headquarters for a new attack on heaven and earth, as Mallory slowly discovers she may be the only one who can stop him.

Well, doggone if Don didn’t go out and sell it to Kensington. I was happy with the deal. I’d always wanted to be in mass market originals. But we had to make a decision. Should I use a pseudonym? We decided yes, so bookstores wouldn’t be confused on where to shelve me and because it was jumping into the entirely new genre, one in fact I’d created: the zombie legal thriller!

That’s how I went from beer to bookshelf. Three books, fun to write, with a complete arc.

Time and Kindles march on. I got the rights back to the trilogy and have now published them myself. This time with my own name attached. Because in the indie-digital world, you can easily cross-pollinate. New readers discover you and loyal readers might try out something new.

In celebration, this week I’m making the books available for 99¢ each.

Are you a risk taker as a reader? You’ve come to the right place. And while it is a requirement that zombies eat, um, us, to stay alive, I don’t go graphic…nothing more than you might have seen at a drive-in horror movie in the 1950s. Here are the Kindle store links:

THE YEAR OF EATING DANGEROUSLY (#2)

So how do you go from beer (it can be root beer if you prefer, or even that writing staple, coffee) to bookshelf?

You should do this periodically anyway. Spend time in pure creation. Generate several ideas in a session. Put them all in What if? form, e.g., What if there is a boarding school for young wizards? What if a Great White shark feeds in the waters during tourist season?

Assess your ideas later on, when they’ve had a chance to cool a bit. Which ones give you the most excitement? Prioritize them. Come up with a tagline and a pitch for the top three (as shown, above). Tweak these until they really shine.

This is really fun. You can write without fear because you haven’t yet made a long-term commitment. Use all your craft to make this opening as gripping as possible. Let the pages rest for a week (while you do other writing), then revise and refine them.

Ask your beta readers (or agent) for their assessment. Put your idea through a grinder. Pretend you’re an acquisitions editor. Would you buy this book? Is the concept be attractive to a sufficient slice of readership?

If everything is positive, and you’re still excited about the idea, finish the thing. Write hot, revise cool.

One of the ways to do this is by making the book a NaNoWriMo project. In fact, the second of my Mallory Caine books began as a NaNo. After I finished the draft I let it cool until January, and then began the rewrite.

In all my years practicing law I met, in court and out, many a lawyer. To the best of my knowledge, not one of them was a zombie. But you never know…

Is there a wild idea sitting on your back burner? What are you going to do with it?