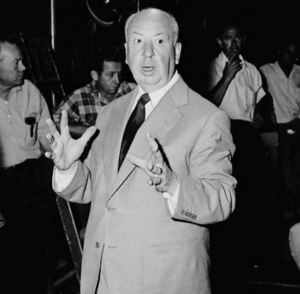 I’m currently working on a new thriller titled The Girl in the Window Who Saw the Woman on the Train Before She Was Gone. I don’t believe in chasing trends, unless it’s this one.

Actually, I wanted to talk about a sub-genre known as the “domestic thriller.” I’m not sure when this was coined, but it’s quite popular now, especially after Gillian Flynn’s runaway bestseller, Gone Girl. More recently, A. J. Finn’s The Woman in the Window has kept readers flipping the pages.

Another example: Cary Grant as the ad executive in North by Northwest (1959). Because of a terrible coincidence, he’s taken to be a master spy by two thugs who kidnap him outside of the Plaza Hotel. Cary is going to spend the next two hours on the run. His only consolation is that he gets to meet Eva Marie Saint.

One more, and this one is chilling because it was based on a true story. In Hitchcock’s The Wrong Man (1956), Henry Fonda, a happily married musician, resembles a gun-toting holdup man. He’s arrested and put through the wringer. Will the real culprit be nabbed before they lock the prison doors on Hank?

So why does the “ordinary man/woman” or the “domestic” thriller resonate so well? Perhaps because 1) it’s easy to empathize with the main character; and 2) it helps us deal with one of our darkest fears—having evil show up at our doorstep.

We read these kinds of thrillers, in part, to reaffirm our hope that there’s a moral force in the universe, that justice will prevail, and that we can get through anything if we hang on with courage.

Plus, we all like getting lost in the fictive dream of a page-turner. Escapist entertainment, Dean Koontz once said, is a noble enterprise, considering what we have to put up with on this spinning orb.

So in that spirit, I offer you my latest thriller, Your Son Is Alive.

The idea for the book came from playing the first-line game. That’s where you just make up first lines that grab, not knowing anything else. One day I wrote this: “Your son is alive.”

Who says it? And why? And to whom?

I had to write the novel to find out.

So I did. The ebook is available from Amazon this week at the special launch price of $2.99:

(The print version will be available soon.)

As always, I have tried to write according to Hitchock’s Axiom: “Drama is life with the dull bits cut out.”

Do you have a favorite kind of thriller?