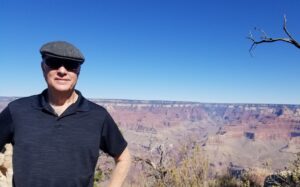 In last week’s post I mentioned I would be driving all day, and that was quite true. Mrs. B and I needed to get out, get away, do something different. Cindy suggested we motor to the Grand Canyon, just to spend a day looking at something big, majestic, unsullied and quiet.

Turns out my wife’s instinct was right on the money. Scientific research suggests that several benefits flow from the experience of awe—“from happiness and health to perhaps more unexpected benefits such as generosity, humility, and critical thinking.”

In The Nature Fix: Why Nature Makes Us Happier, Healthier, and More Creative, Florence Williams emphasizes the need to get away from anthrophone. This refers to the soundscapes created by things like cities, cars, planes, machines, lawn mowers, sirens, neighbors with a teenager who is taking up the drums, and such like. The thing is, that noise goes into our brains and triggers our “fight or flight” receptors. Over time this can create chronic stress, a very real danger to our collective health and well-being.

On the other hand, natural sounds like a gentle breeze, flowing water, and singing birds are interpreted by our brains as relaxing and rejuvenating. In this state we are more creative and less hostile toward other human beings (hmmm…maybe people should only be allowed to tweet when in a forest). 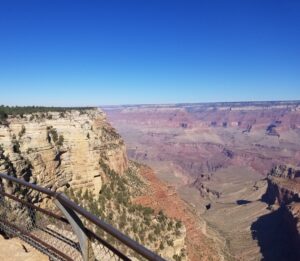 The Grand Canyon is something to behold. If you’ve never been there, put it on your bucket list. Plan to spend at least four hours just looking at it. You can drive to various viewpoints, or take a shuttle bus tour, a helicopter flight, or even ride a mule for an overnight stay at the bottom. We opted for the viewpoints.

Writing awesomely = Good for the reader.

What does it mean to write awesomely? At the very least, it means giving your readers more than a by-the-numbers story. Help them feel something beyond numbers. Tap into the inspirational. After all, that’s what the great myths were for. A hero overcomes tremendous odds so that we, the audience, might exhibit the same courage on our own journey through life.

Heracles kills the Hydra. He does so with a mixture of courage, strength and thought. Since cutting off one of the Hydra’s heads means two more heads replace it, Heracles has his nephew, Iolas, put a torch to each cut to cauterize it. And thus he dispatches the monster. Hey, maybe you can do the same when it seems your bills are like Hydra’s heads.

Or maybe you face a seemingly insoluble problem. If you approach it wisely, like Theseus in the Labyrinth, you can kill your personal Minotaur and find a way back to the world.

In our modern storytelling, we have mythic heroes of various stripes teaching us valuable lessons. Charlotte Vale (Bette Davis) in Now, Voyager, shows us that inner strength and beauty can be developed even under the worst of circumstances. Atticus Finch teaches us that sometimes a losing battle is morally imperative. Heck, even Dirty Harry Callahan shows us that sometimes you have to do whatever it takes to save the innocent—especially a busload of children in the grip of a mad killer. Do you believe that? “Well do ya, punk?” 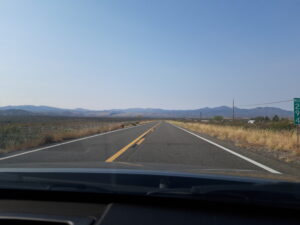 Driving home with Elixir in the trunk.

So one of the ways to be awesome is to be intentional about the meaning of your story. In my book, The Last Fifty Pages, I talk about the idea of a “life lesson learned.” My friend Chris Vogler, in The Writer’s Journey, calls this the “Return With the Elixir.” It’s what takes a story from tale to myth, from entertainment to exaltation. Why not go for it, every time out?

To prepare, take a little time each day to get away from the anthrophone. There are abundant apps and sites with nature sights and sounds. A fifteen-minute break every now and then seems almost a health mandate these days. So get quiet, forget about Twitter, and maybe the boys in the basement will mix you some elixir.

What is awesome to you? What natural sites have lifted your soul?

What works of fiction have elevated you, given you a takeaway that is more than entertainment? 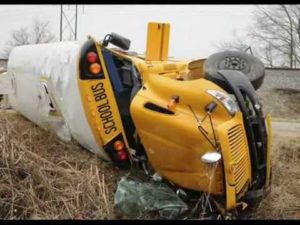 When the Taliban had controlled Afghanistan, they outlawed the education of all girls. Since girls would no longer receive formal educations, there was no need for schools for girls and the Taliban destroyed the girl’s school that had been in the town of Bagshir.

After the Americans defeated Al Qaeda in Afghanistan and drove the Taliban underground, the girl’s school in Bagshir was rebuilt. At the Afghanistan government’s urging, families from the surrounding area started sending their daughters back to school again.

The Taliban leaders—who had gone underground and were fighting an insurgency in Afghanistan—were overjoyed when they heard the news about the new American President’s military plans for Afghanistan. They knew that, if they bided their time, the Taliban would once again rule Afghanistan.

The school bus rounded a curve and the driver saw that there were two Toyota pickup trucks up ahead blocking the road. Several Afghan men armed with AK-47s were standing in the road signaling for the driver to stop.

As soon as the bus driver realized that the men were Taliban, she slammed on the brakes causing the bus to swerve out of control. The children stopped their singing and started screaming in fear. When the driver turned the steering wheel to try to get out of the swerve, she over-corrected and the bus flipped over onto the driver’s side and slid to a stop not thirty feet from the Taliban roadblock.

Hmm. Okay. Anon, you set up an interesting situation here. The execution of it is not without flaws, but it has possibilities.

Let’s start with a generality. Your narrative point of view ping pongs into and out of that bus several times within the first page.  Let’s keep it in the bus. You actually start to create an interesting mood here before things go slipping away faster than that poor bus and all of its passengers do. Let’s let Farzana drive the narrative and the bus for those first few opening paragraphs. I would hazard a guess that all of us know at least one teacher, so she’s going to be a sympathetic and a somewhat identifiable character. She is also right in the thick of things.  Let’s just focus on the inside of the bus for right now and the terrible danger these teachers and students are in.  I’m not suggesting that you eliminate the political backstory, but put that in later, at the beginning of your next chapter. Instead, let your third person narrative unfold from Farzana’s perspective as to the terrible danger those teachers and students are encountering as follows:

The early morning sky was overcast and there was a chill in the air as Farzana drove the school bus down the rural dirt road connecting the village of Kwajha with the town of Bagshir. She had grown up in this area and knew the twists and turns of the road, but she was still on edge. The Taliban had recently issued threats, and when they threatened, actions always followed.

Farzana noticed that the sixteen girls on the bus didn’t seem to be aware of the danger they were in. Martha Rawlings, the young American woman who had recently joined the school faculty, was leading them in a rousing version of “Old McDonald Had A Farm.” All of the girls, ranging in age from eight to fourteen, seemed to be having a good time, their exuberance for singing making up for what they might have lacked in ability.

Farzana looked at them for just a second in the bus’s rear view mirror. When she brought her attention back to the road…

..and so on and so forth.  Anon, I’d like you to watch the movie Dirty Harry, particularly the last twenty minutes or so where Scorpio hijacks a bus load of school kids and begins leading them in song. The kids at first seem to enjoy the diversion from the usual slog home, but they gradually get the feeling that all is not well. That’s what you want to do. Show that fear radiating off of Farzana, first as she exhibits her own worries as to what is ahead on the road, then how she feels as her worst fears are realized, then further as her inattention/nervousness whatever causes her to lose control of the bus and how she feels as she hears the sounds of the children screaming as the bus tips over and books go flying. Keep that going with whatever happens next, whether the girls are all herded off the bus and massacred — or worse — or a John Rambo type shows up and saves the day.

Also, Anon…you mention Kwajha and Bagshir twice in the first paragraph, and Bagshir as the locale of the school a few more times over the course of the first page. Once for each is sufficient to inform your reader of where the road goes and where the school is located. And once you give the bus driver a name — Farzana — you have personalized her, which is a good thing. Call her “Farzana” thereafter, rather than “the bus driver.”

Anon, you get research points for noting the Taliban’s love of Toyotas (I’d love to see a television commercial where a group of them sing, with rifles raised in the air, “Oh oh oh oh what a feeling! Toyota!” just before a 990 AeroVironment Wasp III vaporizes them all) (but I digress). And while your first page needs some work, what you submitted really makes me wonder what happens next in the world of Reb’s Revenge. One more thing…your first page made me realize that, if I get impatient when I get stuck on the highway behind a school bus, I’m being a jerk. It’s actually a privilege for me to have a school bus in front of me, taking kids to school, without having to worry about a vignette like you describe here. Thank you.

Readers and visitors…it’s your turn to comment. I will remain more or less uncharacteristically silent as you weigh in. Thank you in advance for stopping by and contributing.