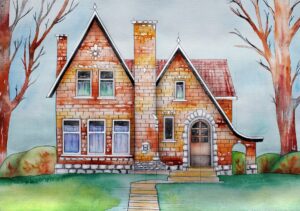 Now, sing with me the song of the novel:

So what is a scene? It’s a unit of action. It involves a viewpoint character who has a scene objective. If there is no objective, the scene is flat and crumbly. The objective must be met with obstacles, which create conflict. If there are no obstacles, the scene is boring. Finally, there is an outcome, which must push the reader on to the next scene.

For today’s lesson, let’s take it as a given that you’ve constructed a scene with these elements. It’s a solid brick, doing its work. I want to suggest three easy ways to strengthen that brick.

Suppose a scene begins this way:

The next morning I showered, shaved, and put on my best suit. I was going to show Mr. Bullard not only that I could be prompt, but also that I looked every bit the hot young salesman on the way up.

Too bad traffic didn’t cooperate with me. The 405 was absolutely jammed. Which made me ten minutes late.

When I walked into Bullard’s office, the first thing out of his mouth was, “You’re late.”

“Sorry, Mr. Bullard, but the traffic was—”

Okay, there’s nothing technically wrong with how this scene opens. It sets the whole thing up. And you may decided to leave it that way for pacing purposes. But consider entering the scene this way:

I slinked out of his office, feeling ridiculous in my best suit. So I was going to show him a hot young salesman, huh? What a joke.

Notice that some of the exposition from the first example is filled in by way of dialogue. That’s always the better choice, so long as you place the info in the midst of a tense exchange.

Tip: Look at the opening of every scene in your book and see if you can start a bit later. Most of the time you can without losing anything.

Most writers, I expect, write a scene to “closure.” They want to end it as if it were a complete unit. Something like this:

I finished filling up the box. Taking one last look around my office—my former office—I made my way to the elevators. Five minutes later I was out on the street.

The last paragraph makes the scene feel like a completed unit. So what’s wrong with that? Subconsciously, the reader takes a breath, relaxes just a bit. If that’s your intent, fine. But consider creating more page-turning momentum this way:

Wait, what? What happened after she left? The reader needs to know! So the page is turned and you take the reader to the next scene, right in the middle of the action (see tip #1).

The lunch crowd hadn’t arrived yet. The bar area in Morton’s was cool and dark.

Tip: Look at all your scene endings and see if a little trim doesn’t give you added momentum. I think you’ll be pleased with the results.

I have a little sticky note that says SUES: Something Unexpected in Every Scene. If you think about it, what is it that makes reading dull? It’s when the reader anticipates what’s coming next…and then it does!

So surprise them. Sometimes that means we change the scene outcome to provide a major shock or twist. But we can’t do that every time without giving the reader whiplash. What you can do is find some way to create surprise within the scene itself. Again, this is easy to do.

Tip: Simply look at the scene and ask yourself what the reader might be expecting with each beat. Then give them something different. Try:

Just a bit more on that last one, which is one of my favorites. From my book How to Write Dazzling Dialogue, I use this example:

That’s called “on the nose” dialogue. And while you need some of it, for that is how we communicate in real life, doing the “side step” is an easy way to surprise the reader.

“Your wife called me yesterday.”

“Why don’t you shut your fat face?”

In sum, these are three easy ways to strengthen any scene. The ROI is tremendous, and you’ll end up with a solid brick houuuuuse. 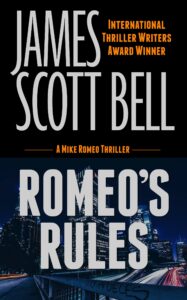 Now let me do you a solid. For the next few days book #1 in my Mike Romeo thriller series, Romeo’s Rules, is on sale for 99¢ in the Kindle store. U.S. buyers go HERE. Outside the U.S., go to your Amazon store and search for: B015OXVAQ0