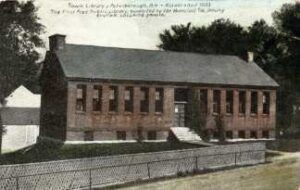 Our local TV station runs a short segment during WMUR’s Chronicle with Fritz Wetherbee, an old-timer who’s a brilliant historian. Every night Fritz shares fascinating stories about New Hampshire. I love learning about the statues, landmarks, buildings, rivers and lakes in my state.

The other night he shared a story about a Unitarian minister who founded the world’s first free public library supported by taxation.

Literary-minded Reverend Abiel Abbot (December 14, 1765 – January 31, 1859) moved from Wilton, NH to Peterborough, NH in 1827 and immediately set up a youth library in his home. He also founded the Peterborough Library Company, supported by membership dues. In proposing the creation of the town library, he described “a central collection of books that would be owned by the people and free to all of those that lived in the town.”

“Inspired by the result, the New Hampshire State Legislature passed a law authorizing towns across the state to raise money for libraries in 1849. Britain wouldn’t pass its Public Libraries Act until 1850, and America’s first large public library—the Boston Public Library—was founded in 1852.” 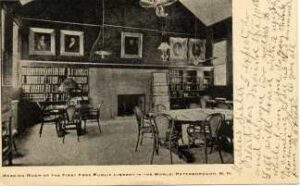 During a town meeting at Peterborough in 1833, Abbot proposed that a portion of the State Literary Fund be used for the purchase of books to establish a library, free to all the citizens of the town. Books purchased by Reverend Abbot and a board of trustees were made available for public use.

Reverend Abbot housed the original Peterborough Town Library in a general store that doubled as the post office, with the postmaster acting as librarian until 1854. After a short stint at town hall, a permanent home was finally built in 1893 to house a book collection that had grown into the thousands.

In a thesis published in 1947, Sidney Ditzion commented on the Peterborough Public Library.

“The account of the establishment of a town library at Peterborough, New Hampshire, is unique in that here we have an instance of what appears to be the spontaneous generation of an entirely new form.  Here, without the stimulus of private donation, without the permission of state legislation, without the semblance of a model in the mother country, a tax-supported town library was born.

The circumstances surrounding the creation of this institution raise an interesting historical question involving local circumstance and group motivation to which no answer has yet been offered.  In January of 1833 a group of farmers and small manufacturers under the leadership of the Rev. Abiel Abbot formed a social library whose shares sold at two dollars and whose annual membership fee was fifty cents.

On April 9 of the same year the town, apparently under the inspiration of the same Rev. Abbot voted to set aside for the purchase of books a portion of the state bank tax which was distributed among New Hampshire towns for library purposes.  This was the way the first American town library to be continuously supported over a period of years was begun.”

Reverend Abbot founded several other libraries, too, including the Juvenile Library and the Library Company of Peterborough. In 1965, on the bicentennial of Abbot’s birth, New Hampshire State Legislature passed a resolution to recognize Abbot’s role in founding the “first free public library in the world supported by taxation.” This resolution also requested that the President of the United States and the Postmaster General issue a postage stamp to commemorate the bicentennial of Abbot’s birth.

For discussion, please share one historical fact about your town or state. Does your local news have a guy like Fritz Wetherbee? The name kills me. He looks exactly how you picture him.

Quick update to my previous post: I’m still keeping the raven alive — 19 long, emotional days, but it’ll be worth it if she flies again. One day I couldn’t find her, and I thought for sure a night predator found her. The next day, she strutted back into the yard for breakfast. What a will to live! Here’s a quick video of Rave chowing down. See the wing?

More later. I’m hoping this story has a happy ending.