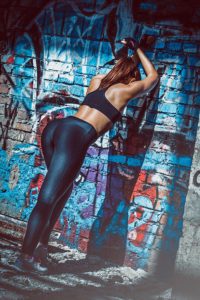 Welcome, Anon du jour, welcome, to our Saturday morning installment of FIRST PAGE CRITIQUE! We have here the beginning of a work titled CROSSROADS, so let’s cue up either the Sailcat album, Neil Young’s Comes a Time LP, or Cream’s Wheels of Fire to provide some background music and proceed:

Kelli Wade speeds along the 405 at night, wears her chopped jeans, favorite silk T, coffee-with-cream Chanel jacket, and cowboy boots.  She threads her way between a bus and rusty Toyota, leaning on her Harley.  Blonde hair streams straight out behind her; her helmet strapped to the side of the seat, unused.  Tears streak the sides of her face, momentarily blurring her vision of the dark traffic.

He was sleeping with that waitress-whore!  Did he think I wouldn’t find out?

She has keyed his car, front, back and both sides, before riding away from her ruined relationship.  And this, after getting word that Jackie, her college roommate, has been diagnosed with stage four ovarian cancer.

“Up yours!”  The rage in her voice blends with the deep-throated growl of the cycle’s engine.  Kelli skids off the exit ramp, swallowing back her pain and pulls up behind the Taft Building.  She chains her bike to a fat drain pipe and takes the service elevator to the sixth floor, shoving open the double doors of Sunset Investigations.  Did he think I was stupid, or didn’t he give a shit about my feelings?

She sits down hard behind her desk, alone, surrounded by darkness.  To keep her mind off murder, she begins to sort through stacks of paper, invoices, and case reports.  The normal day-to-day function of her job.

She takes a deep breath.  Is there’s any wine left in the fridge?

Dawn leaks in through the window blinds, sending streaks across the polished floor.  Other operatives of the agency begin to arrive to work, including her mother.

I’m predisposed to like CROSSROADS, Anon, because from the jump I liked Kelli Wade and how you are developing her from the jump. You get several things right. Naming your protagonist right out of the gate is a great move. You also put the reader in the moment from the first sentence by using the third person present narrative style. I especially like how you show your readers without telling them that Kelli is in Los Angeles: Taft Building + Route 405 + rusty Toyota (that sounds like award-winning author James Scott Bell’s hooptie to me!) = Los Angeles. Additionally, you show that Kelli does not take betrayal lightly. Revenge may be dish better eaten cold, but it’s pretty tasty in the heat of the moment, too. You paint a very clear picture of your character’s appearance and personality within just a few paragraphs, yet we don’t feel bombarded with information. That’s part of good pacing. The additional element of Kelli working with her mother is a nice touch as well.  More on that in a second.

Those are the positive elements. CROSSROADS needs to be cleaned up just a bit in a few places.

— First sentence: Kelli hits a tiny speed bump. She should be “wearing her jeans,” rather than “wears.” The third person present narrative is a good choice, but it has its pitfalls. I think you want a gerund there as opposed to a verb given that she already “speeds” along. Oh, and while you are at it: tell us the model of the Harley Kelli is riding. Enthusiasts love that information.

—  Third sentence: Let’s change that “her: her” to something else. I like to avoid using the same word twice in a row. And let’s get rid of that semi-colon. Here’s one way: Blonde hair streams straight out behind her. She has a helmet, but it’s strapped to the side of her seat, out of the way.

— First sentence: “She has keyed his car” …let’s change that to “She had keyed his car” since it takes place in the past, even if it’s just a few minutes ago.

— First and second sentences: These aren’t really incorrect but I’d like to see them a little shorter and tighter. Let’s use all verbs and make a couple of other changes. As things stand right now,

“Kelli skids off the exit ramp, swallowing back her pain and pulls up behind the Taft Building.  She chains her bike to a fat drain pipe and takes the service elevator to the sixth floor, shoving open the double doors of Sunset Investigations.”

Let’s change that to

“Kelli skids off the exit ramp. She pulls up behind the Taft Building and chains her bike to a fat drain pipe. A service elevator takes her to the sixth floor, where she swallows her pain and shoves open the double doors to Sunset Investigations.”

— The next issue is a question to which I honestly don’t know the answer. It seems as though most businesses store their files and send their bills electronically.  Would a contemporary private investigation agency use stacks of paper or would Kelli be poring over files on her computer? I’ve converted almost entirely to e-billing, electronic documents, etc. That brought me up short, if only momentarily. Of course, if the book’s “present” is before 2007 she is almost certainly pouring over paper. It’s a minor quibble.

— “Is there’s any wine” should be “Is there any wine”…but I suspect that you know that, Anon. Otherwise, good proofing all the way through.

—Dawn leaks in…so…we’ve already been told that Kelli arrived at night, but was it really night or really, really early in the morning? I would like some sort of sense of how long Kelli has been sitting in her office before morning comes. This can be handled in a few words earlier in the text to give us some idea of what time of night Kelli arrived at the office.

— I like the surprise of Kelli working with her mom, but it’s a reveal that you might leave for just a little later. Or not. Also…as CROSSROADS is presently written… how does Kelli know that her mom has arrived? Is Kelli’s office door open and she sees her? Or is the door closed and she hears her? There are all sorts of ways that you can address this and you can do it by showing, not telling. As is in:

Three knocks rattle Kelli’s office door. Only one person in the office knocks like that. “Come in, Mom,” Kelli sighs.

These suggestions are made in the spirit of making a good first page better, Anon. I like the setup and I like your character. Please keep going with both.

I will now strive mightily to be uncharacteristically quiet while our friends at TKZ today offer their own observations and comments. Thank you so much, Anon, for submitting CROSSROADS to First Page Critique! And please don’t forget to circle back and let us know when we can see the rest of CROSSROADS! 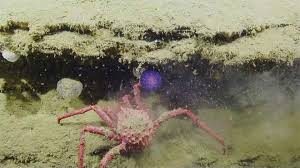 Life imitates art, which imitates life, which then imitates art in what seems to be a never-ending cycle.  Orwell’s 1984 came around, late, but it came around. Contemporary (as opposed to historical) thriller novels were transformed by the terror attacks of September 11, 2001. Arthur Bremer’s diary was the inspiration for the film Taxi Driver which in turn inspired the actions of John Hinckley, Jr. which to this day has launched variations of jokes about Jodie Foster. And so it goes.

Accordingly…submitted for your perusal, here is an article with an embedded video  regarding a discovery made off of the California coast. Please take a moment to read the article and particularly to watch the video, which looks like a mashup of The Blair Witch Project and Alien. We’re going to base our exercise of the day around this, but you will be mightily entertained by the article and video, regardless.

The video spooked me badly for a couple of reasons. The first is the resemblance of that orb to a spider egg. Contrary to the assertion made by one of the scientists, “most” spiders don’t carry around the eggs on their stomachs. Many, though not the majority, wrap the evil little demon spawns in silk and hang them in webs, though if they are smart they don’t do it at my house. So…where did that thing come from? The second is the reaction of Little Sebastian to the egg. Sebastian at first appears to be curious, then frightened of the orb, more frightened than he was of the duct taped suction on the end of the ten-foot pole that the team used to, probably unwisely, suck that thing up. Put it in a biobox? You bet! And who gets to open it? I won’t suggest anyone, other than to note that John Hinckley, Jr. appears to have been released from custody just in time to do the job. The thing just looks…wrong: the color, the location… that video looks like the beginning of any one of a hundred science fiction films where after a half-hour of buildup things go badl, where the folks who are happily chatting and giddy-up giddy with the joy of their discovery are suddenly gouging their own and each other’s’ eyes out and getting ready to release God knows what upon a world that should be expecting it but which remains totally clueless and unprepared.

And that is where today’s exercise comes in, my friends. Tell us what happens after the team sucks the orb up, like one of those vacuum things they sell in the catalogs showing the smiling woman vacuuming the giant spider off of the curtain from a discreet, Hartlaub-approved distance. Be scary, funny, happy, or sad. Here are a few of mine:

— It is discovered that the orb is a  lost extraterrestrial artifact. The ETs, not being European, have never heard of the principle of abandonment and they want the orb back. Now.

— The vacuum sucks the orb up, revealing a drain. The ocean level starts dropping.

— The act of jarring the orb sets off a signal which is transmitted to an extra-orbital missile launching station, which slowly begins to turn toward earth..

—Suddenly, the sound of trumpets is heard simultaneously at all points on Earth. Then the clouds part and a bright light appears.

— The crab scuttles back to its lair, where a female voice is heard asking, “What’s wrong, Sebastian?”

— The crab, after a series of events and mishaps, finds itself in the mustache of a biker on a Harley doing 80 mph on I-10 E out of Houston. The crab tells the biker what is happening and convinces him to turn around and save the day, but…what? Oh, sorry. Wrong crab. Forget that one.

You get the idea. Be serious. Be playful. Be whimsical. But please be creative. And share. We have the nine year old antichrist with us today so I may be awhile getting back to you but I shall do so eventually. Thank you.