Automated Editing? Or Not?”
Terry Odell 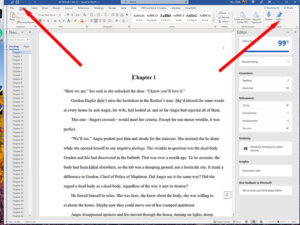 In the process of doing the final pass of the manuscript for Deadly Relations before sending it to my editor, I ran checks through several automated programs. I use SmartEdit to check for overused words and phrases, adverbs, etc. I’ve reported about that here at TKZ before. People have talked about using Grammarly (SmartEdit doesn’t check for grammar), so I tested that with a few chapters. (I used the free version. Premium mileage may vary.)

I wasn’t impressed, as almost every suggestion Grammarly made was “wrong” but I had to look at them to decide. Time suck. And, I had to know enough grammar to recognize when the suggestions were valid, optional, or off-the-wall. A while back, John Gilstrap talked about discovering an Editor function in Word, so I gave that one a shot as well. Most of the suggestions the Editor gave me dealt with commas. I agreed with some, disagreed with many—mostly about commas before “but”. Enough so I looked it up, because Mr. Holtby in HS English drilled into us that ‘but’ can connect two independent clauses, but you needed to use a comma. The Google Machine agreed. I don’t know why the Editor didn’t.

Which brings me to the main ‘flaw’ with these automated editing helpers. They’re not set up for fiction, and they can’t read in context.

Example: The jerry can sat in a spreading puddle of liquid. Both Grammarly and Word’s Editor told me that “can sat” is incorrect usage. It didn’t understand that “can” is a noun in that sentence.

And never mind dialogue, which comes from the character and many rules fly out the window because people don’t speak with perfect, rule-abiding grammar. Or jargon. Many of my characters in this book are cops, and they use “cop speak” which doesn’t follow the rules of grammar.

There’s also the case of voice, which is mine, and I’m not changing my style for any automated program.

Then there’s the section called “Inclusiveness.” Mr. Gilstrap opened a big discussion when he talked about what the Editor flagged in that category for him, so I did a deeper dive. Editor flagged several spots where it thought some people might find my word choices offensive. Not offensive in a profanity way, but rather reinforcing biases and stereotypes.

Here are some examples of what I’d written and what (and why) the Editor suggested changes. It also gave suggested words to substitute. Some made sense. Some didn’t.

“Be home soon.” Gordon put his SUV in gear—only a little white lie that he was already on his way—and headed for home.

You might consider using different language to avoid equating “black” with negative or “white” with positive. Although this term doesn’t directly refer to race, these connotations can unintentionally reinforce racial stereotypes and biases.

A high-pitched voice—Frieda’s—called to Moose. The dog, tail wagging, bounded to the front porch. “Who’s there?” Frieda clutched the dog’s collar. Moose, still eyeing Gordon warily, sat by her side. Not that the frail woman could restrain him should the dog bolt.

Some expressions may draw undue attention to age or imply negative attributes due to a person’s age. Consider removing unnecessary, negative, or condescending references to age.

The coating of dust on the three-inch wide rungs was disturbed by what Gordon interpreted as the toe end of boot prints. Man-sized.

Some terms may suggest negative attitudes or stereotypes related to gender roles or a person’s gender identity or expression. Consider avoiding expressions that may imply bias.

Other usages the Editor pointed out:

After a little digging, I discovered you can adjust the settings so the Editor checks only for what you want it to. (Note: You should also be sure you’ve selected “Casual” rather than “Formal” or “Professional” before running any checks.) Under “Inclusiveness” I found the following options:

Now, I’m of a generation that remembers the addition of “Ms” to the honorific options. I remember what we referred to as “Women’s Lib.” I asked my daughters about some of the usages the Editor flagged, and they agreed with the sentiments behind them, and didn’t think the Editor was out of line. Their social and professional circles differ a great deal from mine. But they also agreed that reading a novel wasn’t the same as face to face talking to other people.

The Big Question is “How does this apply to fiction?” Word doesn’t have a setting for that. And, if you’re writing in Deep POV, everything on the page should come from the character’s voice. Will I consider the words the Editor said were biased? Yes. Will I make all the changes the Editor suggested? No. Because my characters don’t talk that way. At least now. Will they change with the times? Maybe.

**Note. We here at TKZ value our readers’ comments and discussions. Recently, we’ve been having some issues with leaving comments. If this happens to you, we hope you’ll understand. And keep trying. Our web guru is working on the issue.

Coming Soon! Deadly Relations.
Nothing Ever Happens in Mapleton … Until it Does
Gordon Hepler, Mapleton, Colorado’s Police Chief, is called away from a quiet Sunday with his wife to an emergency situation at the home he’s planning to sell. A man has chained himself to the front porch, threatening to set off an explosive.