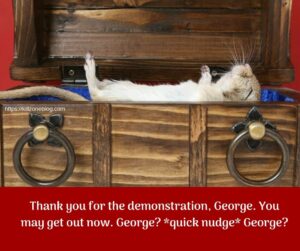 Last Friday I was editing what I wrote the day before in my WIP when a word stopped me cold: casket. Should that be coffin?

The specific year in question is 1901, so I needed to figure out exactly when “coffin” first became “casket”?

The words are often used interchangeably, but they shouldn’t be.

Coffins and caskets give two distinct mental images. I could ruin my scene if I used the wrong word. 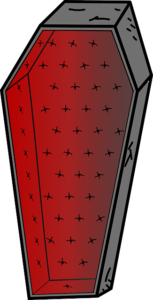 The word coffin comes from the Old French word cofin and the Latin word cophinus, which translates to basket. First used in the English language in 1380, a coffin is a box or chest for the display and/or burial of a corpse. When used to transport the deceased, a coffin may also be referred to as a pall.

The shape of a coffin resembles the shape of a body, with either six or eight sides, wider at the top to allow for the shoulders, then tapered toward the bottom—the foot, if you will. 😉

Coffins date back to ancient Egypt when bodies were placed in a sarcophagus after the mummification process but before being buried in pyramids. Around 700 AD, the Celts in Europe began fashioning ornamental flat stones to coffins. 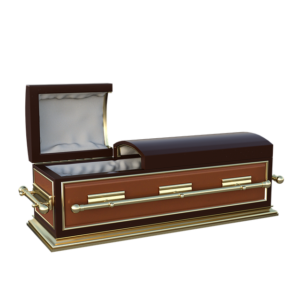 Interestingly enough, the word casket was originally used to describe a jewelry box, similar to the one George modeled in the above photo. 😀

In the mid-nineteenth century, casket took on an additional meaning synonymous with coffin.

Once morticians and undertakers started operating funeral parlors instead of mortuaries, the word coffin changed to casket because polite society considered it less offensive. The exact date still escaped me, though. I also had to consider the location of my story. What if Maine townsfolk used casket while Massachusetts residents still used coffin?

A casket is rectangular in shape and often has a split-lid for viewing the deceased.

Caskets and coffins have been made of wood, cast iron, steel, fiberglass, real glass, bamboo, wicker, wool, and even gold. Wicker and wool threw me. How ’bout you? Carved whalebone, ivory, or precious metals adorned the ornamental trim, if the family coughed up the extra dough.

Both possess side handles for easy carrying. The main difference is the shape. Which, for writers as well as readers, is a pretty big deal. How would it look if pallbearers carried a triangular coffin? See what I’m sayin’? Details matter.

In 1784, a disturbing new law went into effect for a brief period. Holy Roman Emperor Joseph II declared coffins should be reused to save on wood. So, coffin-makers installed trap doors on coffin floors that would drop open as soon the wood hit the grave. After the funeral service, the undertaker would hoist the coffin out of the hole, rinse and repeat. Public outcry abolished the law six months later.

That’s all well and good — fascinating, even; I love learning new tidbits for the ol’ memory bank — but I still hadn’t answered my original question. Should I use coffin or casket in my WIP? Some might not understand a writer’s obsession over one tiny word, but TKZers know every word counts. More importantly, they must be the right words.

Next, I read about the different materials used in coffins…

In 1950, Fisk died penniless after mortgaging his patent rights to John G. Forbes, who resurrected the company and continued the cast-iron coffin business till it folded in 1888. The affluent members of society, however, preferred cast-iron coffins to wood; they helped to deter grave robbers. In fact, some say General Ulysses S. Grant is buried in a steel casket for this very reason.

Edgar Allan Poe’s The Premature Burial added to the chaos of the 1700’s and 1800’s, when folks feared being buried alive. Which is when coffin-makers introduced the safety coffin, complete with cord and bell. We’ve all heard those stories, right? Countless novels, short stories, novellas, film adaptations, and even plays hopped on that particular bandwagon.

The lady was deposited in her family vault, which, for three subsequent years, was undisturbed. At the expiration of this term it was opened for the reception of a sarcophagus; — but, alas! how fearful a shock awaited the husband, who, personally, threw open the door! As its portals swung outwardly back, some white-appareled object fell rattling within his arms. It was the skeleton of his wife in her yet unmolded shroud.

A careful investigation rendered it evident that she had revived within two days after her entombment; that her struggles within the coffin had caused it to fall from a ledge, or shelf to the floor, where it was so broken as to permit her escape. A lamp which had been accidentally left, full of oil, within the tomb, was found empty; it might have been exhausted, however, by evaporation.

On the uttermost of the steps which led down into the dread chamber was a large fragment of the coffin, with which, it seemed, that she had endeavored to arrest attention by striking the iron door. While thus occupied, she probably swooned, or possibly died, through sheer terror; and, in failing, her shroud became entangled in some iron — work which projected interiorly. Thus she remained, and thus she rotted, erect.

As you can probably guess, I got sucked right into the master of darkness’ story instead of searching for the answer to my research question! It wasn’t easy — Edgar Allan Poe’s mind intrigues me — but I finally managed to refocus on the task at hand.

Turns out, I had the answer all along in my printed research paperwork, hidden in a news article. The story told of a victim’s father who argued over the price of his daughter’s coffin, believing he should be charged the wholesale price rather than retail. *facepalm*

Ah, well, I figured, maybe I can use this casket/coffin research for my Monday post on the Kill Zone. 🙂 There must be a lesson or two in here somewhere. Or maybe, just maybe, this information might save one of you research time in the future.

What say you, my beloveds? Have you ever gotten hung up on one word? Did it lead you to uncover a fascinating tidbit or two? Tell us about it. 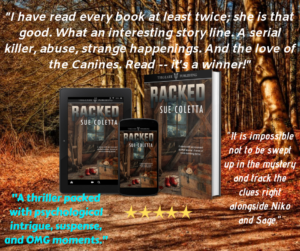 International Thriller Writers wrote a feature article about RACKED, which I’m still *happy dancing* about. If you’re interested, you can read the full article HERE.

The ebook of RACKED is on sale for 99c on Amazon for another day or two.

*All books in the series can stand alone.