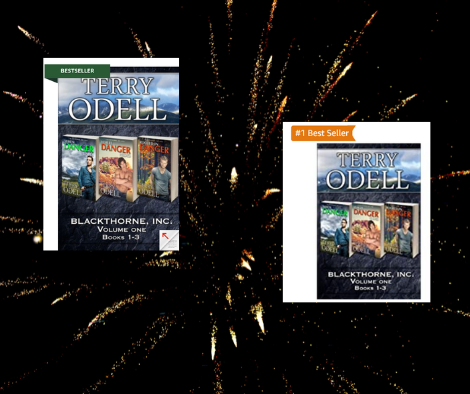 Can you read those “Best Seller” banners at the top of the book images? Those were put there by Amazon and Barnes & Noble, not me.

I should rush right out and change all my book covers so they proclaim my status. Plaster it on my website, add it to my email signature line.

But let’s step back and be realistic.

A while back, I attended a conference workshop on becoming a best-selling author, thinking I might pick up a few tips. Nothing she said was anything different than advice I’d already heard dozens of times. When I walked out was when the presenter said that if you could be in the top 100 on an Amazon genre list, you could promote yourself as a best-selling author. Note: she said “Genre List,” not overall sales. Another route was to make the top 100 in a Genre list on Amazon’s “New Releases page.”

Yes, I got those banners from Barnes & Noble and Amazon. But how?

I was fortunate to garner a BookBub Featured Deal promotion slot. For which I paid a pretty penny, mind you. Getting the BookBub acceptance is as much luck as it is having a first-rate product. They hold their algorithm cards close to the vest, but I’m convinced a lot has to do with timing, how much of a price drop you’re willing to take, and maybe reviews, although they’ll be the first to point out that many of their deals have very few reviews. In this case, my submission was for a 3-book set. The set itself didn’t have many reviews, but the individual books did, and one had won a respected award. But, it could just as easily have been numbering all the submissions in any given genre and using a random number generator to pick.

So, for one day, my Blackthorne Inc. Novels, Volume 1 was featured in the BookBub newsletter. Sales skyrocketed, which is the usual case. Not a huge moneymaker, since I’d dropped the price to 99 cents, which lowers the royalty rate (except at Nook, which pays 70% regardless of price).

Because those skyrocketing sales brought the book to #1 in 3 sub-genres, they garnered me those Best Seller banners.

Realistically, when I see an author I’ve never heard of touting themselves as ‘best-selling’ authors, I’m going to look up their books on Amazon. When I see that they’re ranked in the hundreds of thousands—or, in some cases, millions, I have to wonder. Odds are, they’re looking at a fleeting moment of good sales/rankings based on an ad. And that they received that ranking for a relatively obscure genre, not overall sales.

And popping back to that workshop where making the top 100 in “New Releases” was grounds for declaring oneself a best-selling author? I have a new release coming out this summer. I put it up for preorder and used BookBub for a pre-order ad. These are different from Featured Deals, and are dirt cheap in comparison. The flip side is they go only to your BookBub followers who agree to notification, so it’s a teeny-tiny pool relative to their regular newsletter. (At least it is for me, since I don’t have that many followers on BookBub.) On a positive note, when you’re a tiny fish in a big ocean, it doesn’t take very many sales to boost the new release in genre categories. Based on the workshop speaker, I’m a best-selling author because of that as well. I think my upcoming Trusting Uncertainty hit #50 in one sub genre, and hung on by its toenails in the 80s and 90s in two others.

Early on the day of the new release ad, I checked (because of course I did).

And look who else I’m sharing the stage with.

However, unlike Mr. Gilstrap, who has a much larger body of top-sellers, I can’t, with clear conscience, declare myself an author of best-selling books, or a best selling author. (I do, however use “award winning author” because I have won awards for my books.)