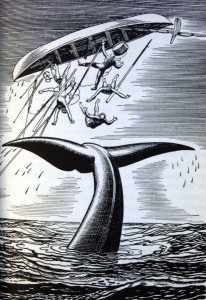 We usually have no problem with #1. But #2 can bite us in the caboose.

What is it that keeps us from finishing a project?

It could be fear … that we haven’t got a handle on the story.

It could be perfectionism … we want the story to be excellent, but sense it isn’t the best it can be.

It could be laziness … it’s easier to tell someone who doesn’t write just how hard it is to write, than it is to actually write.

Whatever it is, it holds us up. And that’s bad for everyone, including your characters.

I find endings to be the hardest part of the craft. They have to do so much–leave the reader satisfied or, better, grateful. Wrap up the story questions. Deliver a certain resonance.

And we all know a lousy ending can ruin an otherwise great reading experience.

My own approach to endings is to have a climactic scene in mind from the start, even though it is subject to change without notice. It usually does change, because as your book grows, unplanned things start to happen. Characters develop in surprising ways; a plot twist takes you around an unforeseen corner. I’ve even had characters refuse to leave a scene when I’ve told them to. I always try to incorporate these things because, as Madeleine L’Engle once said, “If the book tells me to do something completely unexpected, I heed it. The book is usually right.”

As you make these changes in your plot, the ripples go forward in time to affect how the book will end.

So you adjust. When I get to the point where I’m going to write my ending scenes, I follow a plan I call Stew, Brew, Accrue and Do.

I think hard about the ending for half an hour or so, then take a long walk, letting the story “stew” in my subconscious. My walk inevitably hits a Starbucks, because you can’t walk in any direction on earth for very long before hitting a Starbucks.

Inside I go and order an espresso. Brew.

I sip the espresso and take out a little notebook and pen. That’s when I Accrue. I jot idea after idea, image after image, doodle after doodle. I’m not writing the words of the ending, I’m just capturing all the stuff the Boys in the Basement are throwing out at me because they are hopped up on caffeine.

Then it’s back to my office where I actually Do–write the blasted thing until it’s done!

Now, even with that plan there have been a few occasions in my professional life where I get to Do and got stuck in Didn’t. I just was not finishing, for some reason or other. And I had to break through because a company had been nice enough to pay me some money and was expecting, in return, a complete manuscript. How unfair!

I always made it. And of late I haven’t really gotten stuck in Didn’t.

With one screwy exception: my novelette, Force of Habit 4: The Nun Also Rises.

I mean, I should have finished this six months ago! I was doing other projects during this time, yes, but I always came back to Force 4 trying to figure out what the heck was going on–or, rather, what was not going on–with my vigilante nun, Sister Justicia Marie of the Sisters of Perpetual Justice.

Finally, a couple of weeks ago, I just said to myself, “Listen, Stupid. Finish the doggone story! Or are you just a big fraud?”

“Okay,” I answered back. “How do you propose I do it? And don’t call me Stupid.”

And then I thought of Ray Bradbury.

As an L.A. resident I was privileged to hear Bradbury speak on a number of occasions. He liked to tell the story of when he was writing––or trying to write­––the script for John Huston’s film version of Moby-Dick. He was in Ireland and London for months, trying to 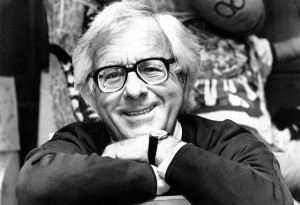 pare down the huge novel and all its symbolism into a filmable screenplay. Finally, Huston demanded the script.

Bradbury rolled out of bed one morning and looked in the mirror and cried, “I am Herman Melville!” Then he sat down at his typewriter and went at the keys for eight straight hours. And finished. He took the pages across town and handed them to Huston. Huston looked at them and said, “What happened?”

Why did I think of this account? Because Force 4 was born as I was reading the biography of Robert E. Howard, one of the great pulp writers. He was, of course, the creator of Conan the Barbarian, as well as other series characters in different genres. His writing was big and wild and full of action.

Which was how I was conceiving this latest story of mine.

So I pulled a Bradbury. In my office I cried, “Behold Robert E. Howard!”

And then I wrote and wrote and finally finished the story. And it is big and wild and full of action.

But most important of all, it is done!

And now it is available for Kindle. Here’s a preview:

So tell me, writing friends. Have you ever had a real hands-on struggle with an ending? How did you handle it? 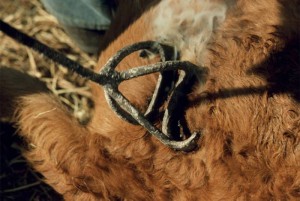 Last week I wrote about the re-launch of my first series, co-authored with Tracie Peterson. City of Angels, Book 1 in the Trials of Kit Shannon series, is now available for the intro price of $2.99 on both Kindle and Nook.
Which raises (not begs!) the question: can an author today have several brands?
Back in the “old days” (like, before August, 2010) branding was a key concept in the traditional publishing world. Still is, actually. That’s because a publisher trying to make money with an author has to build a repeat readership, and that’s done over time, book by book.
Take a hypothetical author. Let’s call him Gil Johnstrap. He comes out with a terrific first novel, a thriller about a boy on the run from the law. A fan base starts to form and they eagerly await his next book. If that book were to be about a horticulture competition in Surrey, England, circa 1849, they would tend to be confused and frustrated. They might decide to skip the next Johnstrap because they’re not sure what it contains.
So Gil and his publisher come out with another thriller, this one about a family on the run from the FBI. Fans buy it and are happy. They start spreading the word to other thriller fans about this Johnstrap fellow. The growing base looks forward to the next thriller. And so it goes.
Now, if an author becomes overwhelmingly popular, like a King, Grisham or Patterson, they earn the right to try, on occasion, something “off brand.” King might write about a girl lost in the woods. Grisham about a painted house. Patterson about whatever the heck he wants—I have a feeling his parking tickets would sell a million copies.
But the publishers will insist on getting “back on brand” with the next book, because that is the bread and butter for them, the guaranteed sales.
Cut to: today. And e-publishing. What is the state of branding now? Let me start with my own experience.
I have been writing contemporary suspense, like the Ty Buchanan series for Hachette and Deceived for Zondervan. I’ve now augmented those books with novella/short story collections I’ve self-published. These all fall into the suspense category, so they are complementary. They make new readers for the traditional work. Everybody wins.
I’ve self-published a couple of boxing stories, because I like writing them. These make me new readers for the rest of my work, too. They do absolutely no harm to the print brands. Plus they bring in nice-dinner-with-my-wife money each month.
I write zombie legal thrillers under the pen name K. Bennett for Kensington. I plan to augment these with short, paranormal stories. These stories will make new readers for the novels. Once again, both publisher and author win.
As mentioned up top, I’m re-launching the historical romance series featuring Kit Shannon, six books in all. I daresay the readers of the Kit Shannon books may find the Mallory Caine, Zombie-at-Law books a tad “off brand.” But that’s okay. Two different audiences, but with potential cross-over. And no harm, no foul to either brand.
I do non-fiction for Writer’s Digest Books. I support those books with articles for Writer’s Digest magazine, my regular Sunday column here at TKZ and on Twitter (where I’ve also developed a strategic brand). Again, everything working together.
So: Can an author today juggle several brands?
My answer: Not only can, but should.
Branding in the days of print-only was partially determined by physical shelf space and seasonal purchases. An author could not come out with several different titles at roughly the same time. Bookstores wouldn’t buy. And they’d be a bit confused. If Gil Johnstrap did write that horticulture novel, A Garden in My Heart,would it be placed on the thriller shelf next to his other titles, where fans would look? Or on the romance shelf? Or in “Gardening”?
But there are no such limitations in the digital world. All books are “shelved” cover out. Digitized books are given, via algorithm, space next to similar books. A reader can find new authors in a genre this way. Quite easily.
An author can distinguish between his brands via cover art, book description, tagging, and even a pseudonym.
John Locke, poster boy for self-publishing success, writes contemporary thrillers and Westerns. Just like Robert B. Parker did after he became a household name with Spenser.
As I said a couple of years ago, this new e-publishing era is a lot like the old pulp fiction days. I look back at a Depression-era writer like Robert E. Howard. He wrote stories in the fantasy, horror, detective, western and boxing genres. All of ‘em. And made a living. That can be done again, now, in today’s e-world. It’s a great time to be a writer who loves to write.
There is only one fly in this ointment: a traditional publishing contract with a boilerplate non-compete clause the publisher is determined to enforce. I know some writers in this predicament. And while I understand that publishers are undergoing paradigm shock right now, this is not the best reaction. Publishers should be willing to re-negotiate these clauses so their writers can earn extra income and make new readers without harming the brand they are creating together.


Publishers who make an investment in an author do deserve consideration and protection. They deserve the author’s best work (non-diluted by overwriting). And they are entitled not to wake up one morning to find their author selling a novel in the same genre for 99¢. Authors need to appreciate the harsh business reality of traditional publishing.
All that said, I see no reason why writers cannot be strategically developing different brands for their digital platform, and have fun doing it. Nor do I see a reason for publishers to resist sitting down with author and agent and hammering out contractual language that is fair to both sides on this matter.


Now I’m going to run a warm bath, put on some Yanni and relax with A Garden in My Heart.