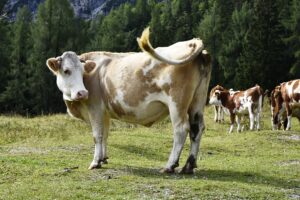 Today’s true crime is a blast from the past, a 60-year-old saga of crime and justice. 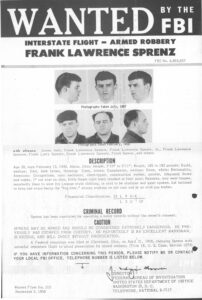 Note: click on the photo and it becomes little clearer to read.

In the late 1950s, Frank Sprenz was a bank robber so successful he made the FBI’s Ten Most Wanted list. His MO: steal a car, rob a bank, flee to another state, and repeat, crisscrossing the country.

Sprenz upped his game when he learned to fly. After robbing a bank, he would then steal a plane and escape to new territory, earning his nickname “The Flying Bank Robber.”

Then came the fateful day when he landed his plane in a Mexican field across the border from Raymondville, Texas. He refueled, intending to escape to Cuba. But on take-off, a cow meandered into his plane’s path. He swerved, hit a tree, and wrecked the plane.

On April 15, 1959, in cooperation with Mexican authorities, the FBI ended Sprenz’s high-flying career.

Sprenz was a lifelong criminal who eventually died in prison, yet his MO showed a certain dash and daring that seems missing in today’s crimes. Or maybe it’s just my nostalgia for the past.

What do you think, TKZers? Are crimes of yesteryear more romantic than current ones?

By MarkAlpert
This will be a brief post because I’m attending the ThrillerFest conference this weekend. I just wanted to share a tidbit I got from one of the FBI agents who spoke to the thriller writers assembled at the Grand Hyatt this morning. An agent who works out of the FBI’s New York City field office said he was investigating someone he suspected of stealing an extremely valuable vintage baseball card, worth hundreds of thousands of dollars. The agent went to the suspect’s house without any warning and the first thing the agent said was, “You know why I’m here?” The suspect looked stricken and said, “It’s about the children, right?” It turned out he was a child molester in addition to being a baseball-card thief.
The agent said he uses that opening line all the time, “You know why I’m here?” Contrary to popular belief, most criminals aren’t devious masterminds. Tormented and corrupted by their sins, most of them secretly want to talk about what they did, and will do so if you give them an opening.

I just returned from the pre-conference, full-day seminar for writers at the FBI. There was a long waiting list for this popular workshop, so I was thrilled to attend! We met top FBI officials for the New York Field Office, including George Venizelos, Assistant Director-in-Charge. The session was jam-packed with presentations by the Special Agents in Charge of the New York Field Divisions, including Criminal, Special Operations/Cyber, Intelligence, and Counterterrorism.

Working with the FBI as a writer

We received a useful handout called WORKING WITH THE FBI: A Brief Guide for Writers. It describes how to request assistance from the FBI for a literary project. The Investigative Publicity and Public Affairs Unit (IPPAU) of the FBI reviews written requests for assistance on a case-by-case basis.

In case you missed it

If you’d like to learn more about the FBI, various Field Offices offer a 10-week Citizens Academy. Follow the link for more information.

What’s your favorite portrayal of the FBI in books or film? I like following the fictional characters of the Behavioral Analysis Unit (BAU)  in CRIMINAL MINDS. 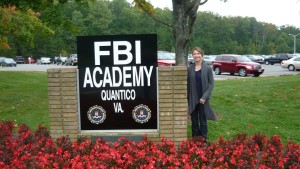 As part of my “Bouchercon week,” experience, a friend had arranged for me to tour the FBI Academy at Quantico. Maybe I’m alone in this, but ever since watching Jodie Foster run “The Yellow Brick Road” in Silence of the Lambs, I’ve been curious to see this training facility.

So I flew into DC a few days early. Spent the night in a hotel just outside the base that was apparently entirely populated by Marines in between tours of Iraq (and let me tell you how unnerving it is to step off an elevator into the lobby and have every eye in the room–and I do mean every one– swivel toward you, as if they’re waiting for someone to show up with an IED). I kept my hands in sight the entire time since they seemed extremely twitchy.) 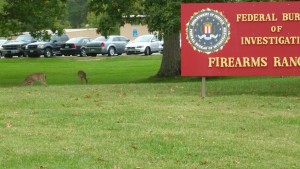 Unfortunately according to my GPS the Academy didn’t exist, so thanks to directions scrawled on a napkin by the concierge I stumbled in the back gate of the complex. Two checkpoints, each with armed guards. I had one of those moments where I act like I’m doing something wrong even though I’m not (a terrible habit I developed somewhere) and got waved over both times for more intensive scrutiny. Forty-five minutes later I finally made it inside and was waiting in the lobby for the group I was latching on to, a contingent from the latest Sacramento “Citizen’s Academy.” 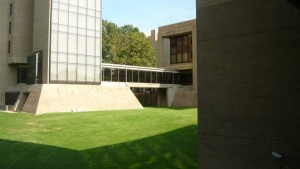 The buildings themselves are fairly standard, that brown block style that was such a hit in the late sixties. There’s a strange, Habitrail feel to them since they’re all connected by windowed corridors. We wove through a few times, until I completely lost my sense of direction and couldn’t find my way back if I tried (this might have been intentional). 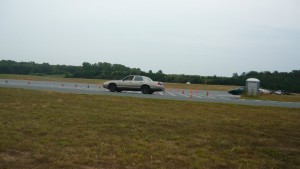 Like so many tours, it featured sparks of excitement and fascinating tidbits, separated by long periods of powerpoint presentations and minutaie during which even I, devoted FBI fanatic, had to fight to stay awake. There’s really only so much a person needs to know about J. Edgar Hoover.

But the tour of the Hostage Rescue Units training facility was amazing. Set inside a huge quonset hut, the entire interior (save for a narrow corridor running along the inside) is a giant maze composed of black padded walls. Sadly, no photos were allowed to be taken there, which struck me as overly cautious since the maze is changed on a regular basis (every room is composed of slats hung from metal beams). Bullet marks pock the walls: live fire drills are conducted here, with instructors walking along the top of the maze monitoring the progress. Suspended above the maze is a nearly full-size mock-up of an airplane, complete with dummies (some of whom appear to have taken a few hits; I’m guessing those trainees failed the course). 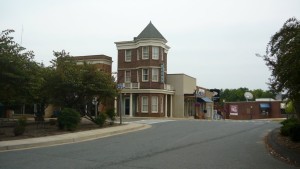 Another highlight (for me, at least) was Hogan’s Alley, the faux town constructed in the center of the compound. We marched into the fake pool hall, checked out the real/fake deli, and explored a seedy motel. Good times. Plus we got to watch some of the students go through their driver training, performing high speed weaves through the cones on the driving course. And let me tell you, you haven’t lived until you’ve shopped in the FBI gift store. Quantico onesies: who knew?

All in all, it was a thrill ride (with some boring bits). I considered a CIA Headquarters tour as well, but according to those who went it was mainly a tour of the CIA cafeteria (Eggplant espionage!)

Anyway, I made some new friends (see below) and got some excellent source material for the next book. Can‘t beat that. 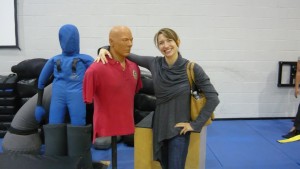