I felt an overwhelming urge to post a review on Amazon today. I’d just finished a thriller, and wanted to give it a mixed report–it had good pacing and kept my interest, but the protagonist was so unlikable that I was rooting for him to fail.

But in the end, I didn’t post anything. In fact, I don’t think I’ve ever posted an online review. Maybe it’s empathy: As an author, I know what it’s like to receive reviews, the good, the bad, and the really ugly. So I feel shy about judging my peers in public. (I’m updating this post because my fellow writers are keeping me honest in the comments: Another reason a writer might not post a review is to avoid alienating other writers, or causing a backlash. You never know when you’re going to bump into the guy you slammed with a 1-star on Amazon.)

But I’m thinking I should change my ways. According to an article in the Economist, it’s the sheer volume of reviews–not whether they’re good or bad–that sells books.  People are much more likely to “click through” and buy a book if it has received lots of reviews, research indicates. Even when that volume includes a healthy slice of unfavorable reviews, the book still sells better. In fact, it’s better to have some negatives–readers mistrust books that have only favorable reviews.

In her MySpace blog, author Deb Baker discussed the importance of her reviews, and issued an appeal for more of them. She’s right on the money. When it comes to reviews in today’s online marketplace, volume counts.

So I’m thinking we should join together and become an army of critics. We could post reviews of all the books we’ve read to get the numbers up. Or we could find a midlist writer who has, say, only 9 reviews, and bump him into the double digits (the threshold for boosting sales).  It doesn’t matter if you liked the book or not. Just post your review.  It would be our own version of crowdsource marketing.

Do you like to post reviews, and do you think writers should post reviews about other books online? Have online reviews played a role in your book’s success? 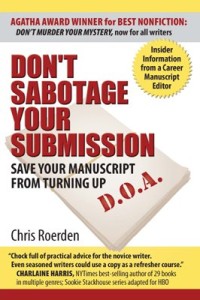 By Chris Roerden
When a mystery I’m editing includes a great deal of specialized or technical information, I help the writer find more effective ways of presenting the material. Too much explanation not only slows a plot’s progression, it stops the story. Agents, acquiring editors, and other readers reject progression derailed by digression.

Yet the technical stuff might be needed for understanding the story, the situation, or the protagonist’s actions. Jargon may be essential for authentic-sounding dialogue.

What’s a writer to do? In my case, what’s an editor to do?

I’m a developmental and line editor, my full-time occupation for 44 years in publishing, starting in NYC. Coping with family transfers, I moonlighted for eight of those years by teaching writing for publication at the University of Wisconsin-Milwaukee.

I was also an instructor of writing for the University of Maine-Portland, then for SUNY-Rochester. One memorable summer I spent in the mountains near Seoul teaching conversational skills to South Korean teachers of English-as-a-second-language. They understood our grammar better than most Americans do.

Notice that the preceding information is a digression. In fiction, that kind of content is called backstory. You probably keep reading such action-stoppers, at first, but after a while you’re likely to skim and skip ahead whenever the content seriously veers off topic.

Skimming and skipping are easy when only a paragraph of tangential information intervenes. Besides, most backstory and explanations can and should be cut. (Really.) But essential material that continually interrupts, especially if it’s technical, needs cutting and restructuring.

FORMAT AS AN EPIGRAPH

Catalyst: A substance that starts a chemical reaction but which is not itself chemically changed.

The above exemplifies a method I suggest of opening each chapter with a paragraph containing the least amount of technical data required by that chapter. Format the information as if copied from another source, using italics or a font different from your main text.

You can also set off the paragraph by indenting from both side margins. Instead of double-spacing, use one-and-a-half lines. Similar formatting and placement make it easy for readers to glance at the technical stuff, yet find it again if they later choose to see what it says. 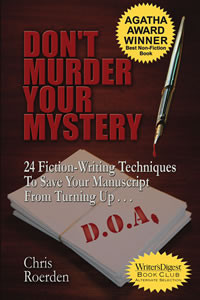 In Southern Discomfort, Margaret Maron starts each chapter with an epigraph from an actual U.S. Navy manual on construction. Be sure the source you quote is in the public domain. (Government publications are.) Or concoct the “quotation” yourself in the style of a legitimate-sounding source.

The above definition of a catalyst is one of many chapter openings in 13 Days: The Pythagoras Conspiracy. This debut thriller by L. A. Starks follows the woman who must discover and stop a foreign plot to sabotage Texas oil refineries. The resulting gas shortages are shockingly real and unexpectedly deadly.

Definitions placed at the opening of many of Stark’s chapters allow the thriller’s pace to move like fire through an oil spill.

A similar device is used by Deb Baker in her delightfully humorous, nontechnical Dolls to Die For mystery series. Each is supposedly excerpted from a book on doll restoring and collecting “authored” by a character in the series, the missing mother of the protagonist. Here’s an example:

When attending a doll show, a repair artist must be prepared for any doll emergency. Aside from standard stringing tools such as elastic cording, rubber bands, and S hooks … (and so on).

Each of Baker’s epigraphs is followed by this authentic-appearing credit line:
—From World of Dolls by Caroline Birch

ASIDES AS ANOTHER TECHNIQUE

Death Will Get You Sober is an insightful, engaging mystery by Elizabeth Zelvin, a psychotherapist experienced in treating alcohol addiction. Her first-person protagonist translates the jargon of the AA 12-step program with brief, unobtrusive asides within the narrative itself. The explanation below follows a line of dialogue spoken by a minor character obviously unfamiliar with acceptable AA practice:

“You mean you don’t like his sobriety,” I said. An AA way to register disapproval without actual name-calling. Step Four was taking your own inventory, not someone else’s.

Another example from Zelvin’s debut novel offers an even briefer, equally straightforward explanation:

“You take care of yourself,” she admonished me. “Don’t you dare go AMA before you’re discharged, and don’t get into any trouble.” She meant leaving against medical advice.

If you have your own examples of explanatory asides in third-person, or other effective techniques, I hope you’ll share them with me.