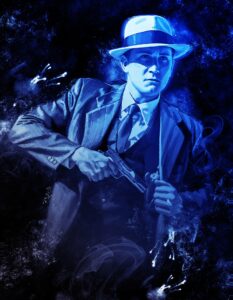 Most mystery writers know this quote by Raymond Chandler: “When in doubt, have a man come through the door with a gun in his hand.”
Like most mystery writing advice, this “man with a gun” needs more explanation.
According to author Louise Tondeur, Chandler was talking about “the demand … for constant action” and how “this could get to be pretty silly.”
“In other words, he was NOT issuing a tip for budding crime writers. He’s saying something closer to: there’s a demand for constant action in detective fiction, men are always rushing in with guns, there’s no time to look around, that’s sort of a shame, but that’s what you’ve got to do to get published these days (these days being 1950).” 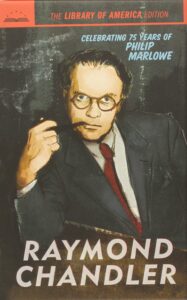 So let’s look at that man with a gun metaphorically, as a constant need for action. Chandler’s quote is really about pacing and surprises in your writing.
You can’t have guys with guns running around loose in your novel and surprises popping up like Whac-A-Mole. Here are some points to consider: 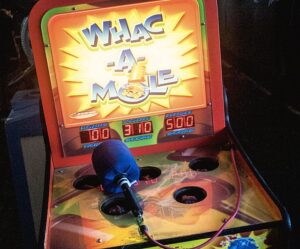 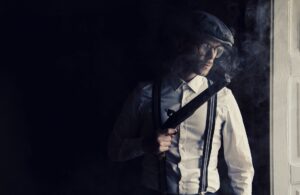 What if the man with the gun kills someone?
That’s good, right? I mean, it’s good for your story, not your victim. It moves the plot along.
Maybe. But this man could create more problems. Consider this.
Who is he killing and why?
Is he shooting a witness? Will that complicate the plot? Is he killing someone he’s always hated? Or a lover who betrayed him? Think about it. This can’t be a random murder. Ask yourself, do I need this surprise/killing here? Or should I use another way to pick up the pace? 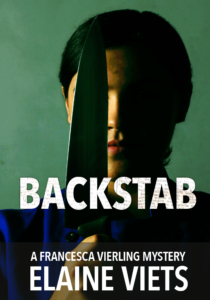 Murder thoughtfully and with restraint.
When I first started writing mysteries, I killed like a serial killer on a spree. Unfortunately, I killed one of my better characters, Lee the Rehabber, in my first mystery, Backstab. As the series went on, I realized I could have used the chatty home renovation expert in other books, but it was too late. I couldn’t even claim he had amnesia and returned from a long trip. I’d already autopsied him. Consider your character’s future usefulness before the bullets start flying. 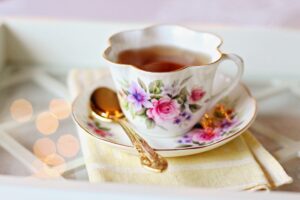 If you’re writing a cozy, for heaven’s sake, don’t let him shoot anyone.
Not in front of your readers, anyway. They don’t want to see all that blood.
Cozies are a delicate balance of family, friendship and murder. You can’t let the corpses start piling up.
Murder according to your genre. You may want more murders in an action-packed thriller or noir mystery.
Finally, if you’re going to have a second (or third, or fourth) murder in your mystery, tie the murder into the plot.
The killing could be a red herring or a clue, a friend of your protagonist or an enemy, but the murder should be tied to the story in some way. I got this advice from one of my editors, and it’s served me well. She did not like random murders showing up in my books. 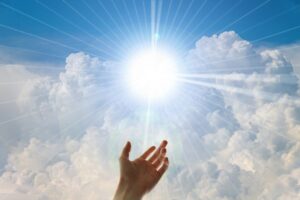 Just remember: You are the god of this world you’ve created, and in your world, all murders (and surprises) must happen for a reason 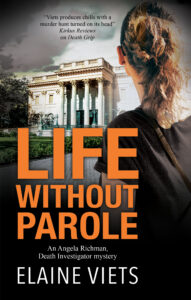 This Friday, Nov. 12, I’m appearing in-person 7:00 PM, at Murder on the Beach Mystery Bookstore to sign my new Angela Richman mystery, LIFE WITHOUT PAROLE.
Murder on the Beach is at 104 West Atlantic Ave., Delray Beach, FL 33444. This will be a free and safe event, with masks and social distancing. You can Zoom, too. Email Murder on the Beach for your free Zoom link. StaceyMOB@gate.net.

37 thoughts on “The Man With the Gun”