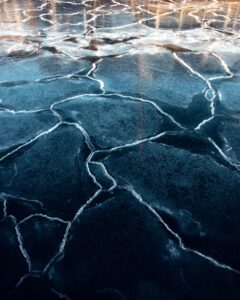 Photo by Kasper Rasmussen on unsplash.com

Our own Jim Bell contributed a deep but highly accessible piece the Sunday last titled “Advice for the Demoralized Writer.” It contains terrific advice which is applicable to all regardless of occupation but the crux of it is to do your very, very best while sublimating your expectations of awards or recognition. If your efforts garner such you will be pleasantly surprised. If not, you won’t be disappointed. I am going to take that advice a step further while aiming it in a different direction.

My suggestion is to write every day. That is not new or original advice. I am offering it particularly, however, to those of you who have no intention of or inclination toward starting or completing a story or having it revealed in the harsh light of day. Writing something every day because you want to, instead of when you have to, is good for you. I truly believe that writing regardless of length or motive makes one smarter — whatever that is — and yes, happier. Writing even one sentence of a few words per day enables you, the unintentional writer, to say, “I wrote this.” It may not give you an adrenaline rush but I submit to you that it will produce, at the least, a drop of it in your cup. It’s the difference between doing an action because you are required to (for reasons from within or without) and doing it because you want to. It can crack the ice that freezes your thinking, whether you write on a post-it, a computer, or your hand. It is an activity that you can do without prompting, or the desire of future reward, other than that occasioned by performing the act itself. I have mentioned this before, but the television series Miami Vice was born as the result of two words handwritten on a piece of paper. The words were “MTV cops.” Your results may differ. That’s the point. There are those who may keep a diary or journal for a similar reason. What I propose is not as involved.

This post is but one example of “wanting to” as opposed to “being compelled to.” I started this post with one sentence, though it is not the introductory sentence that you see above. I wrote a few words to get rolling and then took off, as John Coltrane said, in both directions at once. It was because I wanted to. “The Kill Zone” name notwithstanding, no one here writes with a gun to their head. We are all here because we want to be, whether to write or to read what is written.

Now we present below an example of some writing that a six-year-old miscreant was compelled to do as a classroom punishment in the closing days of first grade. History has not recorded what the lad did over sixty years ago to earn this assignment. If rehabilitation was the purpose please rest assured that the effort failed miserably.  It is a wonder that he ever took pen(cil) to paper again voluntarily, but he did occasionally and still does. 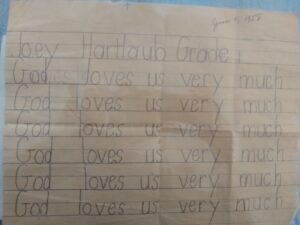 Try what I suggest and see what happens. At worst you will have wasted a few seconds. At best, it could be the start of something big. As with most things, the end result may be somewhere in the middle. Don’t worry about that. This is a worry-free activity for enjoyment as opposed to production. Just put a few words down for the fun of it. You might be surprised.

“He wondered where the painter was.”

Have a relaxing Memorial Day. While you do so, please remember the reason for the season. Thank you. 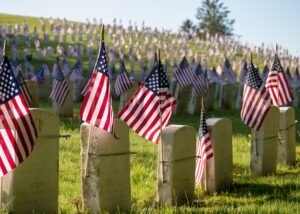 Photo by Justin Casey on unsplash.com

52 thoughts on “The Unintentional Writer”