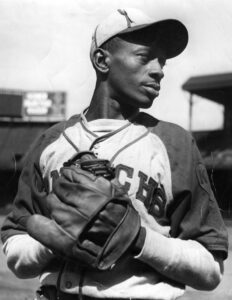 On July 9, 1948, the oldest rookie ever to make the big leagues took the mound for the Cleveland Indians. He also happened to be one of the greatest pitchers of all time.

Leroy “Satchel” Paige was forty-two years old. The Indians were in a pennant race that July, and their acquisition helped get them to the World Series. Paige finished the season with a 6-1 record, a 2.48 ERA and 43 strikeouts.

It was a bittersweet achievement. Paige, one of the immortals of the old Negro Leagues (and thus kept out of the Majors by the color barrier) showed the large crowds who came to see him what he was capable of.  Indeed, Joe DiMaggio once hit against Paige in his prime, in an exhibition game, and called Paige the greatest pitcher he ever faced.

After a disappointing 1949 season, the Indians dropped Paige, but he wasn’t through. He came back with the St. Louis Browns in 1951. In 1952 he was so effective he was named to the American League All-Star team.

Amazingly, Paige’s career continued. He bounced around on barnstorming teams and in the minors, still showing occasional flashes of brilliance. At the age of 56 he pitched for a minor league team in the Pacific Coast League. And then, at 59 (that’s five-nine!) on a whim from the colorful promoter Charles O. Finley, Paige came out to pitch in one game for the old Kansas City Athletics, facing the Boston Red Sox.

Satchel Paige faced ten batters that day in 1965, allowing only one hit (a double by Carl Yastrzemski) and getting his last major league strikeout. Astonishing!

Satchel Paige was elected to baseball’s Hall of Fame in 1971.

In addition to his pitching prowess, Paige was something of a down-home philosopher. He handed out advice like, “If your stomach disputes you, lie down and pacify it with cool thoughts.” Now who can argue with that?

Paige never made a lot of money, yet he kept pitching. Why? Simply because he loved baseball.

You’ve got to love what you do to keep on doing it. We had an intriguing discussion some time ago on whether a writer should think about quitting. Our own Kris (P.J. Parrish) said the only valid reason should be that “the whole process of writing has become something of a chore, a duty rather than a delight.”

Every writer feels that way from time to time. Last year (the late, unlamented, atrocious, and altogether train-wreck known as 2020) induced quite a wave of such feelings. I wrote about why that is here.

So we need to fight back with delight. We need to keep in touch with our inner Satchel Paige and keep writing because we love it.

To rekindle that romance:

“We’ll always have Paris,” Bogart tells Ingrid Bergman in Casablanca. Think back to the best times you’ve had as a writer. When did you feel the most joy? When did somebody tell you something that made you feel good about your writing? Dwell on that. You can do it again.

Almost always we write with the goal of having readers pitch us some dough and become fans. When you have that in mind, it can sometimes sit there like Poe’s raven, mocking you. The way to chase that bird away is to write something just for you, for fun. I like flash fiction (under 1k words) for this. It doesn’t take long, and if I don’t ever publish it anywhere, no big deal. It frees me up to write just as I wish. And sometimes that turns into the germ of a full-length idea.

For me, nothing gets me back into the writing mood like re-reading select passages from favorite novels. Like this from Ask the Dust, John Fante’s 1939 novel about a young writer longing for success:

Los Angeles, give me some of you! Los Angeles come to me the way I came to you, my feet over your streets, you pretty town, I loved you so much, you sad flower in the sand, you pretty town. A day and another day and the day before, and the library with the big boys in the shelves, old Dreiser, old Mencken, all the boys down there, and I went to see them, Hya Dreiser, Hya Mencken, Hya, hya: there’s a place for me, too, and it begins with B, in the B shelf. Arturo Bandini, make way for Arturo Bandini, his slot for his book, and I sat at the table and just looked at the place where my book would be, right there close to Arnold Bennett, not much that Arnold Bennett, but I’d be there to sort of bolster up the B’s, old Arturo Bandini, one of the boys, until some girl came along, some scent of perfume through the fiction room, some click of high heels to break up the monotony of my fame. Gala day, gala dream!

How’s your (writing) love life these days? What do you do to romance it?

25 thoughts on “Fall Back in Love With Writing”