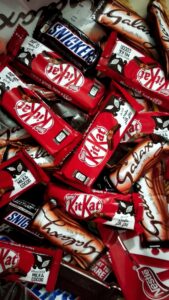 Photo by Fernanda Rodriguez from unsplash.com

Happy Halloween! You cannot get away from it. Websites like BloodyDisgusting and The Lineup, which are hardly sedate during the rest of the year, really kicked out the jams in October by letting everyone know about frightening books both new and old, as well what the streaming services are showing to commemorate All Hallow’s Eve (the answer: plenty).

Out on the street, however, it’s been another story. Some folks have loathe to let their kids out for trick-or-treating for a variety of reasons. Others were concerned about passing out candy for a number of concerns.

I accordingly decided to go dark this Halloween for the first time since I became what I like to think of, probably self-deceptively, as a functioning adult. That raised another issue. What about the children on my street? They are each, to the smallest ankle-biter, uniformly kind, courteous, and in some cases sweet. A solution arrived in due course.

I decided that I would distribute candy to the neighbor children at their homes before the official Halloween hours commenced. I was mindful that nothing will ruin a Halloween more for a child than finding a bunch of candy that they don’t like (or Apples. Or pretzels. Or anything made by Oral B) at the bottom of their bag at the end of the evening.

The solution was simple: I did a little market research. I inquired as to the favorite candy of each child. I asked the parents, of course. The sight of an adult male who is elderly, stocky, and bald asking a child about their favorite candy does not make for a good look. Each kid, interestingly enough, had a different preference. I expected some consensus out of the fifteen little neighbors but none was to be had. I had never heard of some of the choices (Warheads? What the feck are Warheads?) but each of them was easily located, thanks to the local Dollar Tree. That, plus some baggies full of dog treats for the families with a Fido saved the day. It worked out fine. Everyone was happy, even (and maybe most of all) Grumpy Old Me.

Market research. Remember that term.  Candy manufacturers (and manufacturers of just about everything else, really) sink all sorts of lucre into market research, focus groups, and the like before they roll out new products which then swim or sink in the ocean of commerce. Those that tread water and swim multiple laps get pride of place on the shelves of supermarkets. Those that go under three times (usually a product that I really like) don’t get so much as a lifejacket tossed to them.

The publishing industry is really much more subjective. An author has to find an agent who likes the manuscript AND thinks that it can be sold to a publishing house. The agent finds an editor willing to stick their neck out, who takes it up the line and, well, sticks their neck out to get the book published. Again, it’s not enough for the editor to like the book. The ultimate determinant is whether they think that the book will sell. Editors don’t get in trouble because of the books or authors they miss. They get in trouble for the books they champion and usher to market that miss with the audience. The saying in such a case is, “We shipped twenty-five copies and got twenty-six back.” No one along the line, including the author in most cases, has any real research to back them up when they do this, other than that past performance will (hopefully) be the best indicator of future success. One major exception to this is Dr. Steve Hooley, an author who frequently comments on TKZ. Dr. Steve spends a lot of time at various stages in the writing process bouncing things off of his target audience, and to good effect. He is the exception rather than the rule on this. Authors want to write and finish. Publishers are looking for the successor to the last big hit, which has been at various points Harry Potter or The Da Vinci Code or girls with dragon tattoos or on trains. Older readers will recall when Stephen King first broke hugely, and the shelves and racks were full of horror novels. It looks as if that horror cycle is beginning again for a number of reasons. We’ll see. 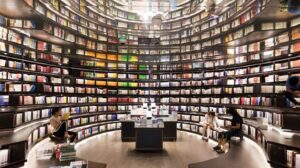 Photo by maounping at shutterstock

All of that sounds depressing. It might be. It might also actually be liberating if you are the writer slaving over their keyboard with high hopes of creating a bestseller, or any seller. While you do this, don’t aim to be next on the current trend line. You want to be first on the next trend. You want people to wonder who will be the next YOU. How do you get there? For starters, remember this bit of wisdom. An announcer who began his career on a low-watt radio station in western Pennsylvania eventually, through a lot of hard work and after experiencing years of failure, created a broadcast and merchandise empire by being himself. He did this in part by reminding himself each morning that “Someone is going to be successful today! Why can’t it be me?” Indeed. For seconds, don’t write like someone else. Someone has already done that. Tell yourself your story out loud until it sounds like something you would say. You’ve got a voice. Use it to sound like unique you, not someone else. And have fun while you’re doing it. If you’re not having fun you are probably doing the wrong thing or doing the right thing wrong.

Enjoy your day and evening. I hope you get exactly what you want in your candy bag. Be well, and thank you as always for being here. No you, no me.

Photo by vishnuMK at unsplash.com

35 thoughts on “Getting What You Want”