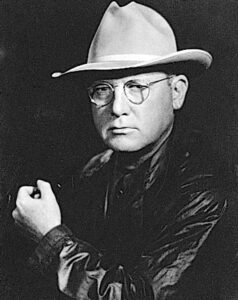 A friend of mine sent me an article about the great pulp writer Erle Stanley Gardner. Since he has been an influence on my own work, I thought I’d do a little reflecting on the man and his method.

Let’s start with work ethic. All the great pulp writers had to relentlessly hammer the keys in order to put food on the table. Get a load of this:

When he died, in 1970, Erle Stanley Gardner was the best-selling American fiction author of the century. He wrote 100,000 words a month for some fifty years. His New York Times obituary cited sales of more than 170 million books in the US alone, and reported his paperback publisher saying that in the mid 1960s they sold 2,000 Gardner books an hour, eight hours a day, 365 days a year.

From the 1920s on, Gardner produced an avalanche of pulp stories, novellas, cowboy yarns, science fiction, travelogues and several mystery series, on top of the 80 Perry Mason novels that cemented his fame and fortune, and won him fans such as Einstein (reported to be reading a Perry Mason novel on his deathbed), Harry S. Truman, and Pope John XXIII.

Early on, Gardner pounded manual typewriters. Sometimes his fingers would bleed and he’d tape them up and keep typing. Later he made copious use of the Dictaphone and a team of secretaries. This, I will note, did not result in deathless prose. But Gardner knew what buttered his bread:

“I write to make money, and I write to give the reader sheer fun. People derive moral satisfaction from reading a story in which the innocent victim of fate triumphs over evil. They enjoy the stimulation of an exciting detective story. Most readers are beset with a lot of problems they can’t solve. When they try to relax, their minds keep gnawing over these problems and there is no solution. They pick up a mystery story, become completely absorbed in the problem, see the problem worked out to final and just conclusion, turn out the light and go to sleep.”

Some years ago I decided to read several Perry Mason novels in order. What was it about Mason that caught on in such a big way? The first Mason is The Case of the Velvet Claws (1933). It didn’t take me long to see the appeal. It wasn’t just smarts Mason possessed. All series detectives have that (e.g., Holmes, Poirot, Marple). No, it was his dogged loyalty to his clients and his determination to fight for them to the bitter end. In a letter to William Morrow about the series he was contemplating, Gardner wrote:

I want to make my hero a fighter, not by having him be ruthless with women and underlings, but by having him wade into the opposition and battle his way through to victory. . . . the character I am trying to create for him is that of a fighter who is possessed of infinite patience. He tries to jockey his enemies into a position where he can deliver one good knockout punch.

Even more, Mason was a modern knight, with a code. As the article states:

Central to these novels is the idea of loyalty—Mason’s loyalty to clients and to the truth; Drake and Street’s loyalty to Mason. Such loyalty is integral to the code of King Arthur’s round table, and the Three Musketeers, whose motto is “All for one and one for all.”

Perry Mason—incorruptible, clever, dedicated, dogged—slots nicely into the Arthurian mould. His “grail quest” is the pursuit of justice on behalf of innocents unable to defend themselves; his jousting field is a courtroom. He is never unseated.

My series character Mike Romeo is, like Mason, a knight. When I was a wee lad I used to watch Perry Mason (starring Raymond Burr) with my lawyer father. The other influence from that time was Have Gun, Will Travel which starred Richard Boone as Paladin (paladin, n., a knight, a champion, a legendary hero). I wrote about that influence here.

So thanks to Mr. Erle Stanley Gardner for his example. Now all I have to do is write 100,000 words in the next four weeks…

Is there an author whose work ethic or professionalism has made in impression on you? How is your own writing practice during these challenging days?