Not enough evidence exists to declare a new crime trend but, from time to time, thefts of motorized shopping carts make the news.

Battery-powered carts are intended for customers with physical disabilities. Yet some thieves—often under the influence—use them as getaway vehicles.

Since the top speed of the typical cart is two miles per hour, none has been involved in high-speed pursuits. So far, the success rate of clean getaways is zero.

In May, 2009, thefts of motorized shopping carts occurred in two separate incidents. A Florida man was caught riding a stolen cart not far from the store. Two South Carolina men attempted a similar caper. Because the carts were valued at $2500, all were arrested for felonies. If they had stolen regular, non-motorized carts instead, the charges would have been misdemeanors.

In September 2014, a 46-year-old woman from Fruitport Township, Michigan, couldn’t get a ride and didn’t want to walk. So, she put six bags of allegedly stolen clothes, worth $600, in a Walmart motorized cart and took off. She was apprehended two miles away by police who ran her through the Law Enforcement Information Network (LEIN), along with the man accompanying her. Both had outstanding warrants.

In January 2015, a Eunice, Louisiana man, age 45, who claimed to have a broken foot loaded up a Walmart cart with a half-gallon of vodka, Mardi Gras cups, and other items and headed across the street to a truck stop parking lot. Surveillance video confirmed he had not paid for the items. When police arrested him, the party was cancelled.

In November 2019, a different Louisiana man, age 32, realized he was too drunk to drive his car and worried he might get a DWI. His solution: drive a Walmart motorized shopping cart instead. A Terrebonne Parish sheriff deputy spotted the scooter parked between two cars at a bar a half mile away. After further investigation, he arrested the suspect. The man was charged, not for DWI, but “unauthorized use of a moveable”, a felony.

The above cases might have had better success if they’d chosen a vehicle like Bonnie and Clyde’s V8 Ford for their getaways. 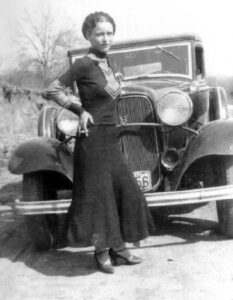 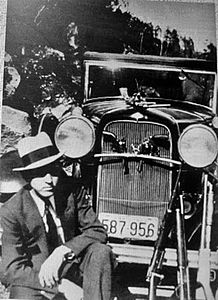 TKZers: What’s the most unusual getaway vehicle you’ve heard of? Was it successful?