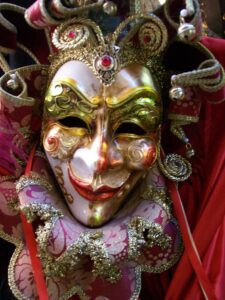 The sleepy town of Bad Kreuznach, Germany found itself at the center of one of the most bizarre, high-profile murder mysteries in the country’s history — the search for a serial killer the police called The Woman Without a Face.

The police found no fingerprints. No witnesses. No description. But they did have a trail of DNA that stretched back 15 years and across three countries. A case so bizarre that the mystery woman — aka The Phantom of Heilbronn — wasn’t only an elusive female serial killer but a cop-killer, as well.

On May 23, 1993 in the quite town of Idar-Oberstein, Germany, a neighbor knocked at the door of Lieselotte Schlenger. No one answered. She knocked again and again. Still no answer. Finally, she phoned the police. When they arrived, they found Lieselotte on the living room floor. Someone had strangled her to death using wire from the floral bouquet. Police interviewed dozens of potential witnesses, but no one heard or saw a thing. The only clue to the killer’s identity were trace amounts of DNA found on the lip of a teacup. Police couldn’t match the DNA to a suspect. They did, however, determine the sample came from a woman.

In March 2001, in Freiburg, a southwestern town in Germany miles away from Idar-Oberstein, a 61-year-old antique dealer, Jozef Walzenbach, was found strangled to death. Where they found his body isn’t clear. Residents feared The Woman Without a Face had struck again. Sure enough, authorities matched the DNA to the first crime scene. Germany, it seemed, had a budding serial killer in their midst.

Seven months later in October 2001, at a public playground in the quaint German town of Gerolstein, miles from the previous scene, a seven-year-old boy stepped on a discarded heroine needle. His frantic mother turned the syringe into police, which set off a chain of events that no one could foresee. Identical DNA from the first two murders was now found on the syringe. 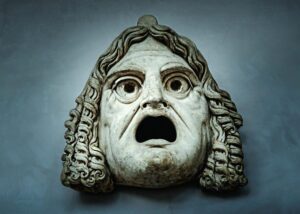 A serial killer with a drug problem is even more unpredictable.

The BKA — German equivalent to the FBI — retested all the samples, which resulted in a bizarre turn of events. Not only was this mysterious woman a murderer, she was also a thief.

In 2004, The Phantom of Heilbronn traveled to Austria and broke into garden sheds along the main drag. She discarded the pants of a tracksuit, a hooded cardigan, and other items. The Woman Without a Face broke into a caravan, stole items, and took a bite out of a biscuit. Authorities found her DNA in saliva on the bite impression. Next, she stopped in France and committed burglaries there, too.

A real menace to society!

The mysterious DNA didn’t turn up again for four years.

On May 6, 2005, a member of the local gypsy community was shot and nearly killed. Shortly after, someone from the same community turned in his brother’s 7.65 caliber pistol. Guess whose DNA they found on the handle? Yep. The Woman Without a Face. 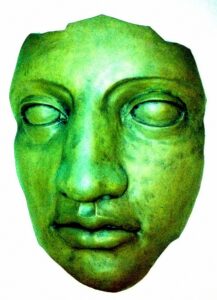 Then, in April, 2007, German officer, Michele Kiesewetter, 22 years old, presumably approached the mystery woman in a car park. At close range The Phantom shot her in the face, killing her instantly. She also shot Officer Kiesewette’s male partner, who slipped into a coma from his injuries. When he woke he had no memory of the killer.

Didn’t matter. The Phantom left her DNA in the patrol car.

In 2008, German police arrested a former informant, suspected of killing three Georgian car dealers who’d visited Germany to buy used vehicles, their bodies dumped in the river. The informant denied knowing The Woman Without a Face. He also denied committing the crimes. Instead, he said an Islamic radical from Somalia killed the car dealers. Because the Islamic radical was already in police custody, they questioned him. He also denied any wrongdoing.

Left with few options, police stripped the informant’s car, analyzed the upholstery, carpet, and lint. And guess whose DNA showed up? Yep. The Phantom had struck again. This triggered police to concoct a new theory of the case, a theory that pointed the finger of the law at The Woman Without a Face. Tirelessly they worked to track down the previous owners of the motor vehicle in the hopes that the car once belonged to the murderess, even though the police had loaned this car to the informant in exchange for his cooperation in numerous cases.

Police Chief Erwin Hetger couldn’t be more thrilled, calling the vehicle a “down payment” to solve the case of the mysterious and elusive Phantom of Heilbronn.

“We’re closing in on her,” he told reporters.

Over the course of 15 years The Woman Without a Face joined the Most Wanted list for her connection to 30 crimes, including six murders and dozens of burglaries and robberies

Quick crime writing tip: Robberies and burglaries are not the same. Robberies involve victims; burglaries occur in empty residents or businesses. Be sure to use the proper term in your WIP!

In a stunning new twist, German police released a photo-fit picture of a man who was either the suspect or an accomplice. Could The Phantom be transgender?

Eyewitnesses reported to have seen this “man” at the scene of an attempted break-in at a flat in Saarbruecken (another German city) in 2006. At the crime scene, police found traces of The Phantom’s DNA on a stone.

We can’t rule out that our suspect is a man now, or that she looks like a man. We just don’t know. This is a unique case. We have 30 crime scenes where we have found traces of her DNA, but we have no face. It’s a huge mystery and it’s incredible that the suspect has managed to hide herself for so long.

Can you guess the outcome?

The police and BKA relied heavily, if not solely, on trace DNA evidence. The startling truth is, a serial killer never stalked those streets. A woman who worked at the factory where they made cotton swabs for DNA testing (and medicinal uses) infected dozens of samples.

What does this story teach us?

Though forensics can be used as a strong backing for other circumstantial evidence, DNA evidence alone is not always a sure sign of guilt.

True stories like The Woman Without a Face make my writer brain sizzle. Just think of the countless ways to siphon elements from this story to send the detective and/or amateur sleuth(s) down the wrong path.

For discussion: Writers, do you pull details from real cases to suit your fictional needs? How did you use those details? Readers, have you ever noticed similarities to a real case in a novel?

For my fellow birders who requested an update on the injured raven, I wrote a post about it for my blog since I didn’t include writing tips like I did in the original story. Enjoy!

17 thoughts on “The Woman Without a Face”