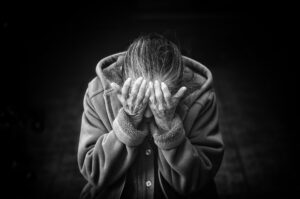 Today’s true crime is personal. My adopted mother, Ruth, was a victim of elder fraud.

Estimates of losses from elder fraud range from $2.9 billion to $36.5 billion per year. That’s billion with a B. Every single year.

After doing considerable research into elder fraud, I was shocked to discover dirty, little-known secrets about indifferent banks, lack of prosecution, and impotent enforcement.

Here’s what happened to my mother:

Ruth, a widow, was fiercely independent and insisted on living alone in her own home in San Diego. After a medical crisis in 2016, Ellie (biological daughter) and I (adopted daughter) tried to convince Ruth to move in with one of us—Ellie in L.A. or me in Montana–or to have another relative live with her. Ruth flatly refused but finally consented to a visiting caregiver three times a week.

For several years, Ruth’s older sister had been taken care of by a woman named “Jane,” (not her real name for reasons that will soon become clear). The sister’s adult children vouched for Jane. The situation seemed ideal since Jane was already familiar with the family and could drive our mother to visit her sister.

Fast forward to 2017 when a catastrophic stroke left Ruth unable to speak or swallow. Ellie and I rushed to San Diego to care for her.

While we were there, Ruth’s credit card bills arrived in the mail…showing balances of more than $15,000 for items Ruth clearly not had charged.

Ellie called Jane and asked about the charges. Jane broke down and admitted she had been using Ruth’s credit cards. She had also been intercepting mail so Ellie would not find out about the bogus charges. After their distressing phone conversation, Jane sent numerous apologetic texts, promising to pay back the money.

But more evidence of fraud kept turning up, like:

Months before, Jane had changed the address for the cable TV, redirecting the service to Jane’s own home, and set up auto-pay from Ruth’s checking account to pay for it.

While we were at the hospital, a neighbor saw Jane snooping in Ruth’s mailbox, evidently trying to intercept more bills.

Jane had written checks to herself for large amounts of cash that Ruth had signed.

We notified Ruth’s local bank. They closed the checking account and turned the case over to their fraud department.

Ellie called Discover and they immediately froze Ruth’s account. They provided photocopies for the past year and we quickly identified many bogus charges Jane had made.

Now for the first dirty little secret: Your bank may not protect you from theft.

Ruth also had accounts and a VISA at a different Big-Name Bank. Ellie and I visited the branch to report the fraud. We explained Ruth was in the hospital and Ellie brought a copy of her power of attorney giving her authority on the accounts.

A bank officer told us the account could not be frozen nor would they provide copies of suspicious charges…until after Big-Name Bank’s legal department reviewed Ellie’s POA, which could take ten business days.

The POA was simple and straightforward. Because of this mindless policy, the bank left the account wide open to more bogus charges. For the time being, all we could do was destroy the card and pray Jane didn’t have a duplicate.

Next, we called the police. Two detectives from the elder fraud division interviewed us. They copied the texts where Jane admitted the theft. We gave them paperwork showing the bogus charges from Discover and from the local bank where the auto-pay accounts had been compromised. They agreed the evidence was more than enough to recommend prosecution of Jane.

Two weeks after the stroke, Ruth passed away just before her 91st birthday. At the funeral, we heard the first hints of suspicion from the children of Ruth’s sister (who had died a few months earlier). The sister’s jewelry was missing and other money had mysteriously disappeared while Jane was caring for the sister.

People don’t like to talk about fraud. They don’t want to accuse someone without proof. They’re embarrassed they didn’t catch on sooner. They feel foolish. Therefore, fraudsters have free rein to continue their crimes.

Ellie and I returned to Big-Name Bank where the POA was supposedly under review by their legal department. We were told that, since Ruth had died, the POA was no longer valid and they refused to help, even though Ellie was executor. Fortunately no additional charges had been made.

We then followed up with the police detective. He said he’d tried to interview Ruth but couldn’t locate her because she’d been moved from the hospital to hospice. Not that an interview would have helped—she couldn’t talk and was comatose.

Then came the biggest shock of all.

The detective said that, since Ruth had died, the case against Jane would not be prosecuted because the victim could not testify. The text messages where Jane confessed the theft plus the paper evidence of fraud were not enough.

Thanks to Discover and the local bank that acted quickly, Ruth didn’t suffer a significant loss. Discover reversed all charges. They were responsible about protecting their customer who’d been a crime victim. I feel bad they had to write off thousands of dollars.

However, my heart doesn’t break for the loss incurred by Big-Name Bank that refused to freeze Ruth’s VISA.

After that account was finally closed, Big-Name Bank then tried to claim Ruth’s estate owed them more than $5000, despite irrefutable proof the charges were fraudulent. The lawyer for the estate finally convinced them it would be a cold day in hell before they collected a cent.

What lessons did we learn?

First, it’s hard to prevent predators from taking advantage of vulnerable seniors. Be aware and suspicious of allowing outsiders access to a loved one, even if their references seem valid.

Second, no one is immune. Ellie works for a superior court judge whose own brother was victimized.

Third, encourage your family member to share their financial dealings with a trusted relative or friend. Understandably, many seniors resist because they fear they’ll lose control of their money. Too often, sadly, they instead lose control to a smooth-talking fraudster.

Fourth, glaring loopholes in the law allow scammers to slip through and move on to their next victim.

Fifth, there are no easy solutions.

If Ruth had consented to live with Ellie or me, would this have happened? No.

But if we had insisted on imposing our good intentions on her, we would have disrespected our mother’s proud, independent spirit. We loved her too much to do that.

We thought we were making her life safer and easier by hiring a caregiver. Instead, we inadvertently opened the door to the henhouse for the fox.

How do you respect the rights and autonomy of loved ones while protecting them from those who would take advantage?

Life imitates art. More than a year before my mother’s incident, I had been writing Stalking Midas, the second book in my Tawny Lindholm Thriller series.

After this experience, I rewrote parts of Stalking Midas to incorporate some hard lessons learned. Although the story is fiction and very different from Ruth’s, I hope readers will find truths within the book to protect themselves and their family.

Justice never caught up with Jane. Her successes with Ruth and Ruth’s sister probably emboldened her to victimize others. That makes me sick.

However, a crime fiction writer can dispense justice on the page……

I’m happy to announce the launch of my new suspense thriller, Stalking Midas.

Cassandra can’t allow that. She’s killed before and each time it’s easier. Tawny will be next.

Stalking Midas is available in ebook and trade paperback.

Especially for TKZ readers, I’m giving away a signed copy of the paperback. The winner will be selected at random from comments on today’s post.

For discussion: Have you or a loved one been a victim of elder fraud? What lesson did you learn?