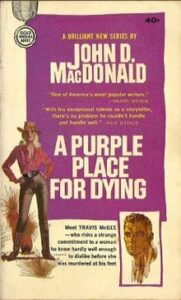 If you regularly read books and articles on the craft of fiction you’ll often come across the term in medias res. That’s Latin for “in the middle of things.” (As opposed to writing in puris naturalibus, or “stark naked,” about which I have no advice.)

Many times the context in which in medias res is used is the all-important opening chapter. As you all well know, here at TKZ we’re big on helping writers get out of the gate grabbingly (I love making up words. And BTW, you can study past examples here.)

My own formulation of in medias res is act first, explain later. You don’t need a lot of exposition up front. Most authors, knowing their story world and characters’ backgrounds, think the reader also has to have a bunch of that info from the get-go in order to be fully engaged. Wrong. Readers will happily wait a long time for those essentials if what’s happening in front of them is tense, exciting, compelling, mysterious, active, or otherwise interesting.

Here’s an example from one of John D. MacDonald’s Travis McGee novels, A Purple Place For Dying. The opening paragraph:

She took the corner too fast, and it was definitely not much of a road. She drifted it through the corner on the gravel, with one hell of a drop at our left, and then there was a big rock slide where the road should have been. She stomped hard and the drift turned into a rough sideways skid, and I hunched low expecting the white Alpine to trip and roll. But we skidded all the way to the rock and stopped with inches to spare and a great big three feet between the rear end and the drop-off. The skid had killed the engine.

That’s in medias res. We have some unanswered questions: Who is She? Why is she driving so fast on a gravel road when death is just a few feet to the left? What is McGee doing in that car?

Do you want to read on to find out? I do.

Okay, at least now we have a name.

The cooling car made tinkling sounds. A noisy bird laughed at us. A lizard sped through the broken rock.

“Goodness, no. We can walk it from here. It’s a half-mile, I guess. I haven’t been up here in ever so long.”

“How about my gear?”

“It didn’t seem to me you had very much. I guess you might as well bring it along, Mr. McGee. Perhaps you might be able to roll enough of this rock over the edge so you can get the jeep by. Or I can send some men to do it.”

“If we’re going to keep this as quiet as possible, I better give it a try.”

Still more questions. What’s this about a jeep? Why does she have the ability to send “some men”? Most of all, why do they have to keep things as quiet as possible?

It is not until the bottom of page two that MacDonald begins to fill in some blanks:

She had met me at noon at an airport fifty miles away, quite a distance from her home base. She said she had a place I could stay, a very hidden place, and we could do all our talking after we got there. Ever since meeting her I had been trying to figure her out.

So have we! Which is the point. MacDonald dangles little bits for us to chew on, just enough to whet our appetite for more. Which is why we keep reading.

Try this: Make a copy of your opening chapter and strikethrough all exposition and backstory. Cut any necessary descriptions to one line. See if that edited scene doesn’t move better. If you feel you need some essential exposition or backstory, limit yourself to three sentences, either all at once or spaced out.

Also: Try pretending Chapter Two is your opening chapter. You may be pleasantly surprised.

In media res can also be used in any chapter opening, to quicken the pace. Simply give us the action before you give us the setting.

Suppose we have a scene in a judge’s chambers between a young lawyer from Dewey, Cheatham & Howe and an angry judge. Let’s use first-person, with the lawyer as the POV character.

The next morning I was in Judge Crotchetti’s chambers. It had two leather chairs in front of an immaculate mahogany desk, and a floor-to-ceiling bookshelf covering one wall. Judge Crotchetti was standing behind his swivel chair. On the wall above him, an oil-on-canvas Oliver Wendell Holmes glared at me.

“I won’t have that in my courtroom!” Crotchetti said, slapping the back of his chair. “Do you understand me, counsel?”

“Clearly,” I said, and smiled.

“Young man, are you trying to show contempt for this court?”

“No, Your Honor. I’m doing my best to conceal it.”

To quicken the pace, go in media res by leading with the action (note: dialogue is a form of action):

“I won’t have that in my courtroom!” Judge Crotchetti said, slapping the back of his chair. “Do you understand me, counsel?”

“Clearly,” I said, and smiled.

“Young man, are you trying to show contempt for this court?”

“No, Your Honor. I’m doing my best to conceal it.”

It was Monday morning and we were in Judge Crotchetti’s chambers. It had two leather chairs in front of an immaculate mahogany desk…

When revising, take special notice of the opening paragraphs of each chapter in your book. Do you tend to open the same way? Go for variety. Open with some form of action. Move description further down the page. Get a little more medias into your res.

Have you ever thought about in medias res? Do you strive for variety in your chapter openings?

36 thoughts on “Writing In Medias Res”