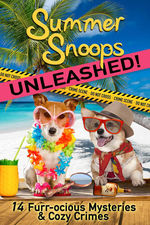 Today we have a guest post from Joanna Campbell Slan on the challenges of incorporating an animal character in a mystery novel. I hope all our TKZers will join me in welcoming Joanna and chiming in with your experiences (if any) on crafting an animal as a character in your mystery or thriller. Also all purchases of Summer Snoops go to a great cause – raising money for dogs in need!

Behold! (The Power of Observation when Crafting a Mystery)

Writing an animal character is tricky. You don’t want to get too sappy, you don’t want to turn off non-pet people, and you shouldn’t rely on the animal to be a deus ex machina, a mystery that’s literally solved by God’s intervention. As one author in a box set with 14 authors, I wanted my puzzle to involve the dog in a realistic way, but I always wanted to use the animal’s limitations to exploit tension in my story. I didn’t want to take the easy way out and let the dog in my story be a simple sidekick. That would feel like a cop out.

The break came when a friend visited with her Golden Retriever, Mally. The big yellow dog carries around a stuffed toy in her mouth all the time. In fact, she’ll only turn loose of her toy to eat or drink. Wherever Mally goes, the toy goes, too.

So how could I use that synergy to best advantage in my story?

I considered the very nature of a dog toy. Okay, that sounds silly, but it’s not. Only by thinking carefully about our subjects can we be authentic. Details. It’s all about details. Those tiny bits of minutia encourage our readers to trust us and to give themselves over to a satisfying reading experience. So what was there to observe carefully about a dog’s toy?

Well, firstly, there’s the nature of the toy itself. In Mally’s case, it’s always a stuffed toy with fake fur. She isn’t interested in balls or sticks.

Secondly, there’s the challenge of confiscating a toy that’s been in a dog’s mouth. Some dogs are “toy aggressive.” They get all humpy when another creature tries to take their toy. In fact, at Paws 4 Play, the local doggy day care, they’ve found that the only safe toy for a group of dogs is a tennis ball. Anything else, and the dogs are liable to fight over their plaything.

Third, dog toys are usually gross. Really gross. In fact, one study by the National Safety Foundation revealed that pet toys are one of the ten germiest spots in the house. Toys are known to be a source of coliform bacteria (including Staph bacteria), yeast, and mold. Only a committed (or soon to be committed) dog lover would handle a yucky, soggy, stuffed toy.

And fourth, a dog toy is destined to be destroyed. My dog Jax loves to rip up his toys. He’ll growl menacingly as he shakes his toys in mock play. Then he’ll grab a stuffed arm, leg, neck or tail and toss the hapless stuffed creature around. As a result, I’m often left with odd parts. (One morning I woke up to a bed strewn with stuffed monkey parts. It was…creepy.) Being the thrifty person I am, I sew these stray parts back together to make Franken-toys. At the very least, I sew up the open seams that dribble stuffing all around the house.

Taken all together, those observations gave me a lot of good ideas. What if someone used a pet toy as a place to hide something of value? What if the toy as a sort of ersatz safe deposit box? That was the break-through idea that became the nucleus of my story.

Here are a couple of links for the book:

The universal book link: https://www.summersnoops.com/?fbclid=IwAR2ZRDaIZO8MixYXdqUX9MtZo-FoCfOY8-d6lo2Dw_bD6ToN9dy5cDYu-HI   And a shortened link: http://bit.ly/2TCQ3si 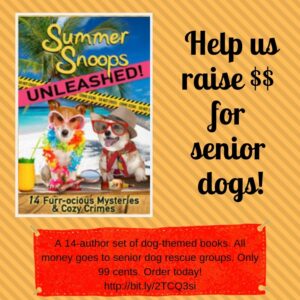 31 thoughts on “Behold! (The Power of Observation when Crafting a Mystery)”