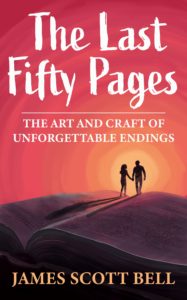 We’ve all been through it. We get caught up in a book or movie, we’re cruising along, liking everything about the story and then … the ending stinks.

It’s too farfetched, too out-of-the-blue, illogical, unjustified, or enabled by some crazy coincidence.

I’ve described certain writing errors as speed bumps. That means the reader is momentarily jolted out of the fictive dream. It might be a teeny, tiny bump, but the reader does feel it. And if there are too many of them along the way, the pleasure of the trip is ruined.

But if the ending lets you down, it feels more like a sinkhole. The whole car comes to an inglorious, crashing halt. The poor reader has to climb out, dazed, wondering why he took this trip at all.

And said reader will now think twice about picking up another book by the same author.

Remember those immortal words of Mickey Spillane: “The first page of a book sells that book. The last page sells your next book.”

And these days, with so much content out there, a competent ending is not enough.

Endings need to be unforgettable.

Yet, as important as ending are, I’ve not found enough practical, nuts-and-bolts advice for creating truly powerful endings.

So I decided to write a book about it.

THE LAST FIFTY PAGES: THE ART AND CRAFT OF UNFORGETTABLE ENDINGS releases tomorrow.

Here’s some of what I cover:

And with my usual hope for peace in our time, it is written for both plotters and pantsers!

There are many examples from top writers, including Michael Connelly, Dashiell Hammett, Louis L’Amour, Mark Twain, Suzanne Collins, Jane Austen, F. Scott Fitzgerald, James M. Cain, and even Don Pendleton (author of The Executioner series). Each is called upon to illustrate the techniques involved so you can immediately put them to use.

A promising writer named Gilstrap is also quoted. This kid is going to break out soon!

I also use some film examples, including unpacking what is probably the most famous ending of all, with the most famous last line. Can you guess what that is? Hint: the last line includes the words “Louis” and “beautiful” and “friendship.”

You can order the ebook here:

And here is the PRINT VERSION for those who like to use highlighters and sticky notes!

Here’s a little preview. One type of ending I call the Uh-oh! This is when the author leaves you with the feeling that something bad or really tense is going to happen, and soon! It’s a staple of horror fiction, but is sometimes found in great thrillers.

In Louis L’Amour’s bestseller Last of the Breed, Joe Mack is an American Air Force pilot, half Sioux, who is captured by Soviets during the Cold War and imprisoned in Siberia. It’s the task of Soviet Col. Arkady Zamatev to squeeze information out of Mack.

But he escapes the prison, which is deemed a stupid thing to do, for the winter is coming in Siberia. How can Mack expect to survive?

Because he is the last of the warrior breed, and his Indian skills come into play for survival.

Zamatev dispatches the Russian analogue of Mack—a Yakut named Alekhin—to do the tracking. The heart of the book is their back and forth, the narrow escapes, the body count.

Finally, at the end of the book, Alekhin and Mack are face to face. It’s time for the fight to the finish.

At this point L’Amour cuts to the last scene, in Col. Zamatev’s point of view. He has received a package—something wrapped up in cloth.

It is a scalp.

There is a note inside also, written on birchbark.

This was once a custom of my people. In my lifetime I shall take two. This is the first.

So what is one of your favorite endings? How did it affect you? Why do you think it worked so well? [NOTE: Be aware that *spoilers* may be included in the comments. So look first at the title and decide if you want to know the ending!]