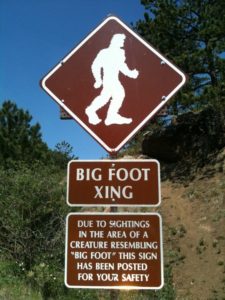 The title of this anonymous submission is ISKOLA. I’m not sure if Sasq’ets is Sasquatch, but that’s how we dubbed it. It conjures an image of the “Skunk Ape.” If this isn’t the author’s intention, a character name change might be in order. Please enjoy this submission and I’ll have my feedback after.

Sasq’ets can’t help staring at the swarm of people standing on the side of the road. There are so many of them, and they look so small from where he stands. He scans each person quickly, moving his eyes from body to body, face to face, until he comes to a woman with a black hood around her head. Then he stops, lifts his nose high in the air, and tries to catch her scent. He strains his ears to hear the faint echo of her voice. It’s difficult from so far away.

As Sasq’ets watches the woman, he notices her pointing at a man who appears to be climbing down the side of the road. It looks like he is headed towards the woods – towards him – but Sasq’ets can’t be sure, so he squints his eyes to try to get a better look. It doesn’t matter. He shouldn’t be so close to people anyway, especially not in the light of day and after what has happened. He needs to start moving, so he turns around and walks the other way, maneuvering his massive frame carefully through the trees, dangling his arms loosely by his thighs.

He walks deep into the woods and doesn’t look back until he reaches the creek that marks the beginning of the path towards home. He needs to turn right to follow the burbling water until it winds into the river, but before he changes direction he stands behind a cedar, his body shielded by its 5-foot trunk, and puts his hands on his hips, bending at his waist to relieve some of the pressure from the wound in his stomach. The bleeding has stopped – when he puts a cedar bough up to the cut and pulls it away, it comes out dry – but the injury is still painful, and it aches if he thinks about it too much.

Sasq’ets focuses his mind on taking long sips of air – in through his nose, out through his mouth, and starts to calculate how long it will take to get back to the cove. At least a day, he figures, if he goes the long way. Which he should, to be safe.

He moves slowly to his left and peers around the tree to make sure no one has tracked him into the woods. Sasq’ets is pretty sure he would have smelled them if they had, or heard their heavy footsteps through the brush. But still, he needs to be careful.

Nope. No one. They’re probably all still back on the side of the road, hovering over the girl’s body.

In full disclosure, when I was a kid, we had a neighbor boy we nicknamed Skunk Ape. He lumbered like a walking grizzly, had big feet and he smelled. He remained my brother’s friend and we still run into him (although he’s married and he doesn’t stink anymore), but I’m not a stranger to Sasquatch. There, I said it.

TITLE: A title like Iskola needs work. This might only be a working title, but this word would not mean something to most people.

CREATURE POV: I’m making an assumption Iskola is a creature, Sasquatch to be exact. He appears to be an outsider and a loner, hiding from people. Whether he’s a creature or not, the Point of View should reflect his cagey, wiry nature.

The narrative is too wordy for a cautious creature, afraid of getting noticed. He also knows words like “road” and “people” which seems odd to me. It would be a challenge to create a believable POV inside the head of a creature. The author would have to invent a world as seen through the eyes of a beast that has evaded mankind enough that it wouldn’t know what to call things in a man’s world.

Personally, I would tell this story through the eyes of another character who tries to reach out to the creature in an adventure plot. I would recommend more of an element of mystery on what is disrupting the town and leave clues that are ambiguous. Is it Sasquatch or someone living in town who wants people to think it’s a creature.

I’m not sure why the author chose to put the reader in the head of a creature from page 1. It would be a hard sell to an editor or agent. Even if this is not Big Foot and is maybe a loner who lives in the woods, I’m not sure I understand the point of hinting at Sasquatch with the name Sasq’ets either.

PICK A POV: In this scene, I want to know why these people are gathered and what’s happened? The author can’t provide this information if the POV is seen through Sasq’ets. In order for the reader to care about this creature/Sasq’ets and his world, the author might need to ground the reader into the town and the people first. What happened that threatens both their worlds? (A girl is hurt or dead.)

CREATE the CREATURE: Let’s start with POV. 3rd person narration for a creature would allow the reader to see the character’s movements and actions, without delving too much into the head of the creature like 1st person would. The way this intro is written, it’s in 3rd POV, but the author has put the reader very deep into the head of Sasq’ets. Some distance might make it more believable. The creature’s actions would SHOW the emotion without having to TELL the reader too much.

How intelligent is the creature? What senses would he use? It might help to do research on animals and how they react or operate when threatened. Service dogs are interesting to study – how they use their senses and their reactions to certain situations. I would recommend using real animals even if the author is creating a mythical creature. Put the reader into the senses of an animal the author thinks is closest to Sasq’ets.

How does a wild creature, that is part human maybe, survive in the woods? I like how the author brought in cedar boughs to stop the bleeding. Maybe survivalist research would be in order.

Even if the creature is a human being living on the fringes of society, it might still be interesting to keep the reader in suspense whether Sasq’ets is human or something else. Instincts and senses and animal reactions would help build on that suspense.

The author might consider how Sasq’ets lives when he is safe and home versus when he is threatened like a wild animal. What would he do? His wild nature, when confronted, should be explored. Can he ever live with humans? What would happen if he is forced into captivity?

ANOTHER START SCENE: If the author started with danger and a situation readers might be intrigued by, the creature’s POV might be brought in later, if that’s what the author wants. To make it read authentic, the creature must have his own world and manner of thinking and moving in obscurity. Below is a brief start suggestion – first from a Sheriff and a brief one in Sasq’ets POV. I didn’t spend a great deal of time doing this, but I only wanted to show a quick difference.

Another beginning with townspeople to start the action:

With his chest heaving, Sheriff Jason Tate knelt near the base of a tree and stared at the tip of his finger, smeared with blood.

His deputy, Gloria Mendez, had her service weapon drawn as she stared into the deepening shadows of the dense woods.

“We need to get these people out of here. What if it comes back?”

Sasq’ets ran into the darkness of the forest and kept to the deepening shadows. He followed a scent he knew well. Water. He needed water…and water would take him home if he followed the river.

His belly hurt and the bleeding hadn’t stopped. He didn’t mean to hurt the small female, but she had been scared of him and fell. He hadn’t touched her, but that wouldn’t matter. They would hunt him.

When I talked about service dogs, I had done research on them for another book and found it fascinating. The images of how dogs smell scent in layers and in a conical fashion influenced how I described the dog “working a scene.”

I think the author can still work with the challenges of creating a world for Sasq’ets, but maybe start with human beings that readers can relate to more.

What comments would you have for this courageous author, TKZers?