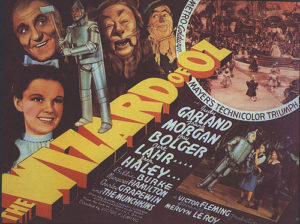 Years ago, my husband and I had a good friend named Jimmy Bogle (not to be confused with the American Ninja Warrior). Jimmy was a little person who stood about four feet six inches in cowboy boots.

Jimmy told stories about growing up in the 1920s and ’30s, during an era when little people were considered “freaks” and “abnormal.” Children born with dwarfism were often hidden away in the basement so they wouldn’t bring shame on their families. Many grew up in isolation, never knowing there were other little people like themselves. A few found homes in circus sideshows or vaudeville but career options were pretty limited.

Then came the casting call for Munchkins in The Wizard of Oz.

During the poverty of the Great Depression, parents of little people seized the chance to earn money from their children’s size.

Jimmy was a teenager at the time. He was chosen to take over the role of the Mayor of the Munchkins when the original adult actor (who receives credit on Wikipedia) couldn’t finish the film. Heavy makeup transformed Jimmy into a wrinkled old man.

More than a hundred little people came together and were cast in the movie. Many had never encountered another little person before. For the first time in their lives, they connected with others from similar sheltered backgrounds, with similar problems and feelings. They were no longer isolated but suddenly among friends with whom they had an immediate connection. In 21st century parlance, they’d found their tribe.

The Munchkin cast was short in stature but long on partying. They drank and danced and pulled pranks. They fell in and out of love several times a night. Full of mischievous exuberance, they trashed the hotel where they were staying.

Knowing Jimmy, we suspect he played ringleader to this merry band of cut-ups.

In 1981, Billy Barty, Chevy Chase, and Carrie Fisher starred in the film Under the Rainbow, a fictionalized account of the making of The Wizard of Oz. Jimmy scoffed at the movie, saying it didn’t do justice to his gang’s shenanigans.

What does this have to do with writing conferences? I’m glad you asked.

Although writers’ families don’t hide us away in basements (at least not usually!), we are often perceived as different from regular people.

Writers work in isolation, living inside our imaginations. Many are shy introverts and are sometimes perceived as antisocial.

That is, until we get around other writers. Then we emerge from our shells.

At my first writing conference, I was a tongue-tied beginner, ill at ease, self-conscious, surrounded by professional authors who, I was sure, wouldn’t lower themselves to talk to an unpublished nobody.

Big surprise. They were welcoming, encouraging, and, amazingly, as plagued with self-doubt as I was. Shyness melted. Friendships blossomed spontaneously from our common passion.

Like the little people who came together as Munchkins, I’d found my tribe.

I became a conference junkie and my dear husband supported my addiction. Instead of birthday gifts, he treated me to various gatherings.

Along the way, I became a volunteer at Rocky Mountain Fiction Writers (TKZ‘s own Jim Bell is their keynote speaker this year) and Pikes Peak Writers Conference. I judged contests, handled the registration table, moderated panels, etc. Working behind the scenes made me appreciate the experience even more, seeing how much time and effort went into pulling together a successful event.

Because I saw many different presenters, I became a speaker wrangler for the Flathead River Writers Conference sponsored by my local group, the Authors of the Flathead. Inviting editors and agents for a fun weekend in Montana is a far easier job than querying (begging) them to consider a manuscript.

I learned they were not cruel gods who cavalierly damned struggling writers to slush pile purgatory. They are human beings who genuinely feel bad about rejecting manuscripts. They struggle with budgets, timing, and marketing constraints. They serve as midwives who are often as ecstatic as the author when a book is born.

And they like to talk to writers. They’re glad to demystify the publication process.

Conferences provide a rare opportunity to interact face to face with editors and agents. If traditional publication is your goal, meeting the pros in person can be a big step out of the slush pile. When you’ve paid tuition, they can see you’re serious about your career.

Whether you go the traditional route or self publish, contacts at gatherings can enhance your knowledge in ways you never imagined. I once spent an afternoon in a hotel lobby listening to an FBI agent and a forensic anthropologist trade stories. My collection of business cards is a great source for experts in all kinds of fields.

While the cost of conferences can be off-putting, many organizations offer scholarships or internships. Volunteer help is always needed and may earn discounted tuition.

You can also cut expenses by splitting the gas bill and sharing lodging. I’ve roomed with three pals whom I only see at conferences. Our reunions are always a blast. Like happy Munchkins, we drink, laugh, and stay up all night, although we don’t trash the hotel…at least, not that I remember!

Conferences provide more than education and professional contacts. They take us out of our solitary world and give us a chance to connect with our tribe. I always come home energized, inspired, and eager to write.

Now for a shameless plug: if you’re looking for a friendly, intimate gathering that offers lots of useful information for a reasonable price, please check out the Flathead River Writers Conference, September 22-23, 2018 in Kalispell, Montana.

Look me up—I’d love to meet TKZers in person. We’ll celebrate like Munchkins.

When Debbie Burke is not writing suspense and thrillers, she’s on the planning committee of the  Flathead River Writers Conference, now in its 28th year.