Cla-shack.  When I say it out loud, it is exactly the sound that a well-tuned pump-action

shotgun makes when you work the bolt.  It’s very dramatic on the page or on the screen, and it is unmistakable in real life.  How many times have we seen that moment when our good guy with a shotgun confronts the armed bad guy he’s been looking for and then, when they’re face-to-face . . . cla-shack “Freeze!”?

I watch those scenes and wonder what kind of moron searches for a bad guy without a round in the chamber, ready to fire?  Why walk into a gunfight with your gun unloaded? 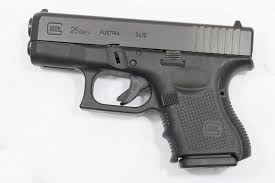 This is a Glock 26, but all Glock platforms work the same way. Note that there’s no hammer.

Remember that very dramatic scene in The Fugitive (the 1993 movie version) when Richard Kimble is making his getaway from City Hall with Marshal Sam Gerard right behind?  In that chase, we see Gerard pull his Glock from its holster and he racks a round into the chamber.  Then as Kimble dives through the bullet proof glass barrier doors, Kimble’s foot gets clamped between the doors and Gerard fires four or five times into the glass.  Very thrilling, but why didn’t he shoot the sole of Kimble’s foot, which was still inside the glass?  Okay, that last part is for a future post.

Understanding that the average gunfight lasts less than five seconds, and at a range of 7-10 feet, every cop I know carries his or her pistol in what’s called “condition one”, which means there’s a round in the chamber and the safety is on.

“But John!” someone shouts.  “Everybody knows there’s no safety on a Glock!”

Not so, I reply.  There are actually three safeties on a Glock.  They’re internal.  There’s a trigger safety, a firing pin safety and a drop safety.  You can throw a chambered Glock against a concrete floor as hard as you want, and it won’t go off accidentally.  Yet, if you pull the trigger intentionally, it will fire every time.  And that’s the point.  When someone is about to kill you, you don’t want a lot of intermediate manipulations to get in the way of returning the favor. 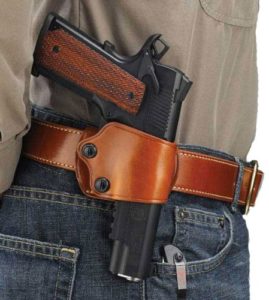 This is a “1911 platform” pistol in Condition One. Note that the hammer is cocked, and the thumb safety is engaged. This is often called “cocked & locked.”

If you’re going to include firearms in your writing, it’s important to know the peccadillos of your character’s chosen pistol (or rifle, for that matter).

My character Jonathan Grave carries a Colt 1911, always in Condition One, which also called “cocked and locked.” When confronted by a bad guy, all he has to do is draw, thumb the safety (press down on the lever next to the hammer) and shoot.

Many gun manufacturers use the 1911 platform for pistols in pretty much any caliber.  Among the characteristics they all share is the fact that they are single action only (SA), meaning that unless the hammer is cocked, the weapon will not fire.  Thus, when you see a character carrying a pistol that looks anything like the one in the picture, but the hammer is down, it is not ready to shoot. 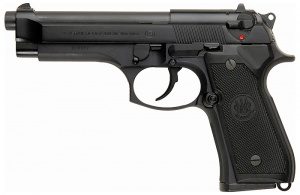 Many pistols like this Beretta 92 (military M9) are double action on the first round, and single action thereafter.

On the other hand, there are many pistols with hammers, such as the Beretta M9, where carrying with the hammer down does not impede quick deployment.  That’s because these pistols are both double action and single action (DA/SA).  With a bullet in the chamber, and the hammer down, the first pull of the trigger pulls the hammer back and then releases it to strike the firing pin.  Then, after the slide operates to eject the round, the hammer remains cocked and ready to shoot as a single action pistol.  The tricky part is that that initial pull on the trigger is very hard, and then the pull is very light for the follow-up shots.  As a result, for me, anyway, accuracy suffers because of the lack of a consistent trigger pull.

As I’ve written before in this space, if verisimilitude is important to you, and you’re going to write about firearms, don’t go with what you see on TV or in movies.  Get thee to your local shooting range and rent your character’s gun for an hour and shoot it.  If you’re not familiar with shooting, the staff will be happy to help you out.

All questions and comments are welcome.