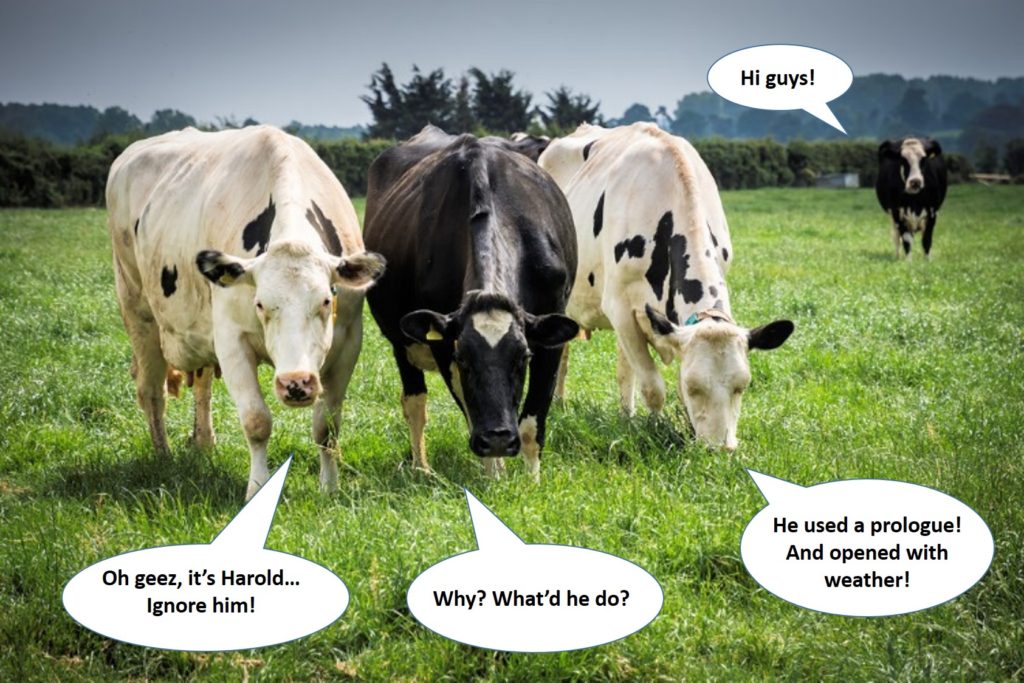 I’m not a big ice cream eater. Take it or usually leave it. But the thing about living up here in Traverse Ctiy, Michigan, is that you must love ice cream. Not just any old Edys or everyday Haagen-Daz. It must be Moomers. 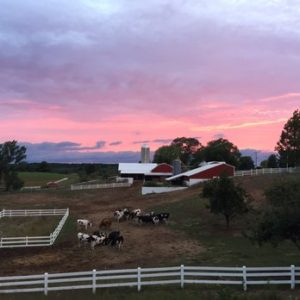 Moomers is a family dairy farm up here that has been around since the glaciers carved out the Great Lakes. Okay, I exaggerate. But Moomers is like dairy manna up here. Maybe it’s because the Moomer cows look so happy. You can watch them grazing as you snarf down your Cherries Moobalee ice cream from the parlor up on the hill.  (see left) Recently I took my 9-year-old grand-niece to the farm and she asked me “Are those cows?” (She lives in Macau so doesn’t see a lot of livestock).  I couldn’t help it. I said, “Those are sacred cows.”

Cheap joke. And this is a long way to get to my point. Moo-mer, me, okay? I’m having a bad week with the galley corrections, among other book stuff, and my brain is like mush.

So, let’s talk about sacred cows in writing. I’d bet you can rattle off a long list of them that you’ve heard in workshops, at conferences, stuff you’ve read in how-to-write books, absorbed from Stephen King, or even seen here at TKZ.  Never use adverbs! Stay away from prologues! Write what you know! Write every day or die!

I dunno. Maybe it’s time to kill off some sacred cows. I’ll start. You guys can add your own.

Never Open With the Weather

I think this one started with Elmore Leonard. I respectfully disagree. Now, if you’re just painting pretty mood pictures on your first page with sunsets or trying to tell readers “bad stuff is coming” with rainclouds, yeah, I’d say you’re edging up to the cliche cliff. But if weather figures into your plot, go for it! In the aftermath of a hurricane, a man walking through the debris on a beach finds a baby skull.  That’s the opening premise of our book Island of Bones, the catalyst of the case for Louis Kincaid. But we first had to show a woman so desperate to escape her killer that she ventured out into the fury of the hurricane in a dingy. Which brings me to the next cow…

I don’t like prologues. I’m on record here with that. You know why? Most prologues are tacked on, like some flabby artificial limb, because 1. The writer couldn’t figure out how to establish world-building (common problem in fantasy) 2. It’s a giant info-dump about the protag’s background. 3. Writer panicked and thought he needed a wham-bam action opener as a hook because someone told him all novels have to open fast. 4. The writer is showing off and can’t stand to cut her beautiful prose. (Been there, done that.) Okay, here’s a rule you can take to the bank: Bad prologues are bad. I’ve read some great thrillers that open with prologues from the villain’s point of view and it works because it sets up the stakes for what the hero is up against. Also, some complex stories jump around in time or space and that can give the reader brain-cramps. And a good prologue can help that. Remember the movie Terminator? It opens with a great prologue.

Los Angeles, 2029: The machines rose from the ashes of the nuclear fire. Their war to exterminate mankind had raged for decades, but the final battle would not be fought in the future. It would be fought here, in our present. Tonight…

So you might need a prologue set in WWI and then you jump to chapter 1 present day. Maybe. But proceed with caution. Take off “Prologue” and sub in “Chapter 1.” Does it still work? Then ditch the prologue tag; the reader won’t miss it. Robert Heinlein’s Stranger in a Strange Land opens by telling us about a martian named Valentine. Then it jumps ahead 25 years. He labels the sections I and II, but to my mind, the Valentine “chapter” reads like a good prologue. Here’s a good post by agent Kristen Nelson on why most prologues don’t work.

Adverbs Are For Amateurs

“The road to hell is paved with adverbs,” Stephen King said sternly. What we’re talking about is mainly adverbs that end in “ly.” Many writers, especially when first starting out, struggle to find the right words to convey that beautiful chaos in their heads. So often we get stuff like: “You’re my world, baby-child,” she said lovingly. Or “I’m going to rip your head off,” he said menacingly. The problem, of course, is the dialogue should be doing the heavy lifting, and if you need a crutch-word after said, well, take a harder look at your dialogue. But every once in a while, you might need one for simple clarity.  Don’t write: “He shut the door firmly” when you can say “He slammed the door.”  BUT…I can make a case for “He closed the door softly behind him” or “Louis nodded thoughtfully.” So yeah, I think you can toss the occasional adverb into the stew. But as you gain more confidence in your writer’s voice, I’ll bet you use fewer “ly” words.  She said encouragingly.

I’m not going to try to kill this sacred cow (I believe in it too strongly). But I might try to tip it over. Telling is one of the hardest things to rid from your story. It’s also one of the hardest things to explain to new writers. I’ve devoted whole Powerpoint workshops to it. Basically, your story (and the reader’s experience of it) will be richer if it is filtered through the actions, words and thoughts of your characters. Simply put, you need to show your character doing things rather than you, the writer, telling the reader what is going on. Fiction is drama; not statement. BUT…to tip the cow, sometimes a little judicious telling is necessary. A novel is not a movie. Sometimes we can be “told” what is going on in a character’s psyche. And sometimes, we just need the clarity and shorthand that pure exposition can supply to move the story forward faster.  “By the time he got to Phoenix, he was tired.” Maybe the journey wasn’t important, so this is all you need to tell. I think our own James pointed out here once that if you “show” everything, there is no modulation, and you end up giving equal weight to all scenes and actions. (Correct me if I’m misquoting you, Jim).

Write What You Know

This cow always kills me. Because if were true, all thirteen of my novels would be about an aging white woman whose biggest dream once was to be a hairdresser and who came THISCLOSE to being a housewife in the Detroit suburbs with at least three red-haired kids. (Don’t worry, I won’t explain that any further).  I get where this hoary piece of advice came from: Don’t write about cultures, people, places or the kinds of stories that you have no affinity for. This is why I don’t attempt YA or sci-fi. But it does not mean you can’t write stories about opposite genders, different races, places you can’t get to physically. You are a writer! Your job is to make things up! See, there’s this wonderful thing in the writer’s chest called the imagination tool. I picture it as an awl drilling a hole into a different dimension. Writers live in this dimension of dreams (and nightmares), where things are easier, harsher, more beautiful, more terrifying, where we can be freer, more daring, than we can ever be in real life.  If you ever feel disconnected from this power, go to a playground or beach and watch some kids play. They are unbound, they are passionate, they are making it up as they go along. Yes, you should use what is unique in your life experience for your fiction. But If you cannot tap into your imagination, if you cannot step outside your own skin and unleash your empathy, you can’t be a writer. I’ve lived inside the skins of six serial killers, a coma victim, a French-Algerian cop, a classical cellist, a fallen Catholic priest, a gay Palm Beach walker and a girl who believed she was a reincarnated slave. To say nothing of living for 20 years now in the skin of a biracial man. Louis Kincaid, c’est moi.

Okay, that was the liver and broccoli. Now let’s have some ice cream.  Here are some “sacred cows” I found that I think are worth keeping around to graze in your brain:

Never use a metaphor, simile, or other figure of speech which you are used to seeing in print. — George Orwell

Never get drunk outside your own house — Jack Kerouac

Leave out the parts readers tend to skip — Elmore Leonard

Forget the books you want to write. Think only of the book you are writing.– Henry Miller

When in doubt, bury someone alive. — Edgar Allan Poe

Okay, that last one is made-up. So what? So are all my books.

38 thoughts on “Killing Sacred Cows
— Or Maybe Not…”