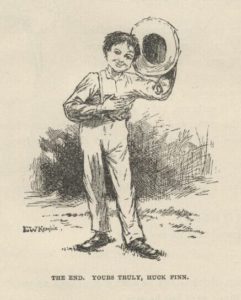 Hemingway famously declared that all of modern American literature comes from one book, Mark Twain’s Huckleberry Finn. The novel, however, was controversial from the jump. In 1885 the Concord Public Library banned it from their shelves for being “the veriest trash, suitable only for the slums.”

In recent years Finn has been removed from reading lists for its copious use of the N word, though Twain was portraying a slice of 1840s America in order to expose and shame its prejudices. But this is not a post about that controversy. The interested reader can find a good overview of the dispute in this article.

What I want to focus on is Twain’s use of the mirror moment, and the transformation of Huck. In my book on the subject I assert that knowing the mirror moment tells you what your book is really all about. And that’s certainly true of Huckleberry Finn. (How Twain managed to read my book long before I was born is still a mystery.)

In the middle of the novel Huck has the opportunity to turn Jim over to some slave trackers, for a reward. In the culture Huck is part of this is the “right” thing to do. A slave is someone else’s “property.” Thus, helping Jim escape is stealing. And since stealing is agin’ the Good Book, Huck is in danger of hellfire. So he’s been taught.

But something makes Huck hesitate. He tells the trackers that he and the fellow on the raft (Jim in hiding) have small pox. The trackers make a quick exit.

All this causes Huck to reflect:

They went off and I got aboard the raft, feeling bad and low, because I knowed very well I had done wrong, and I see it warn’t no use for me to try to learn to do right; a body that don’t get started right when he’s little ain’t got no show—when the pinch comes there ain’t nothing to back him up and keep him to his work, and so he gets beat. Then I thought a minute, and says to myself, hold on; s’pose you’d a done right and give Jim up, would you felt better than what you do now? No, says I, I’d feel bad—I’d feel just the same way I do now. Well, then, says I, what’s the use you learning to do right when it’s troublesome to do right and ain’t no trouble to do wrong, and the wages is just the same? I was stuck. I couldn’t answer that. So I reckoned I wouldn’t bother no more about it, but after this always do whichever come handiest at the time.

So here is Huck asking himself who he is, who he is supposed to be, and deciding for the moment that the best thing is to just not think about it. But he’s teetering toward a transformation of some kind. He doesn’t have the capacity (yet) to completely understand what’s happening inside him. But we know whatever it is it’s at the heart level.

Here is Huck’s transformation late in Act 3. His inner struggle is too much to bear. He wants to feel cleansed, once and for all, so he won’t go to hell. He writes a note to Miss Watson—Jim’s “owner”—and says he’s got her slave and to send the reward money. He feels good for a moment because he’s not going to go to hell now. But then he starts thinking about all that he and Jim had been through:

I’d see him standing my watch on top of his’n, ‘stead of calling me, so I could go on sleeping; and see him how glad he was when I come back out of the fog; and when I come to him again in the swamp, up there where the feud was; and such-like times; and would always call me honey, and pet me and do everything he could think of for me, and how good he always was; and at last I struck the time I saved him by telling the men we had small-pox aboard, and he was so grateful, and said I was the best friend old Jim ever had in the world, and the only one he’s got now; and then I happened to look around and see that paper.

Huck takes up the letter and suddenly freezes,

because I’d got to decide, forever, betwixt two things, and I knowed it. I studied a minute, sort of holding my breath, and then says to myself: ‘All right, then, I’ll go to hell’—and tore it up.

One of the most powerful transformations in all of literature. Indeed, the esteemed Prof. Arnold Weinstein of Brown University calls it “[a]rguably the greatest moment in American fiction.” By ripping up the letter Huck proves his transformation, his breaking free from a false moral prison into nascent humanity. It finds completion in the famous last lines:

But I reckon I got to light out for the Territory ahead of the rest, because Aunt Sally she’s going to adopt me and sivilize me, and I can’t stand it. I been there before.

That’s how you make a classic. A moral dilemma, a mirror moment, a crisis of conscience, a final decision, proof of transformation, and a resonant last line.

But, truly, these things can be done in any genre, and will elevate any book. There is plenty of competent fiction out there. But why settle for mere competence?

I’m sure each of you can recall a powerful, transformative ending in a book or movie, one that you’ve never forgotten. Tell us about it.