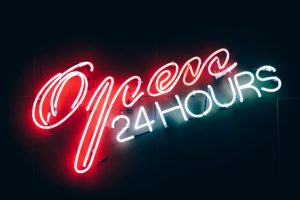 Hello, TKZers! Please join me in giving a hounddog-howdy to Anon, who has bravely submitted the first page of The Divinity Complex for our consideration. Anon, take it away!

We have no choice when it comes to life and death. But sometimes others make the choice for us.

Chris Martinez pulled into Jimmie’s Travel Center early Sunday morning. He parked his blue Chevy Impala in the spot closest to the front door and walked into the convenience store. The entire journey from car to register should have taken no more than a couple of seconds. But it took Chris a bit longer because every few steps, he stopped and looked back at the car. It was apparent something was wrong…very wrong.

Randy, the thirty-year-old attendant on duty, watched from behind the cash register. He thought the customer’s behavior seemed odd, but then he reminded himself of where he was. Jimmie’s was right off interstate I-95 in South Georgia. It was somewhere between late Saturday night and early Sunday morning. Under those set of circumstances, it would have been odd not to see something out of the ordinary. It wasn’t a matter of if, just when.

When Chris arrived at the cash register, he looked Randy straight in the eyes. He cleared his throat as if he wanted to say something. But he couldn’t tell what was on his mind. Chris had to be careful of the words he chose. That was because the phone tucked in his shirt pocket was recording the conversation. Chris knew if he said the wrong thing something terrible would happen. He had no choice but to play by the script.

If he wanted to stay alive, Chris would have to rely on his ability to send a single telepathic message. Being a carpenter by trade and not a psychic, made the chance of success infinitesimal. But Chris had to at least try. It was his only hope.

Chris locked onto Randy’s eyes and concentrated. He screamed as loud as he could into his own head hoping it would get Randy’s attention.

Sweating and trembling, Chris handed over a twenty and two fives. All he could muster was a half-hearted but utterly fake smile. It was apparent something wasn’t right.

“30 dollars…on…uh…Pump…10,” Chris said. That’s all he could say. Anything else and there was a good chance someone would die. Chris looked at Randy again.

Anon, I absolute worship road trip stories, particularly those that wander off the freeway and into parts that are at least initially unknown. You accordingly had me from the jump. There is a glaring problem that jumps out at me, however, and it leads to others. It’s fairly easy to fix, so let’s roll up our shirtsleeves and see if we can Chris back on the road.

The main problem that I had with your first page from The Divinity Complex is that the narrative point of view keeps shifting. You’re using the “third person multiple.” narrative. That means that you are describing the action through the eyes, ears, and thoughts of multiple characters in the third person. That is fine, but it gets confusing when you shift so quickly.  You go from Chris to Randy to Chris again in the course of three paragraphs and then seem to shift into third-person omniscient, where the third person narrator knows everything at all once. A number of books shift point of view from character to character throughout. There is nothing wrong with that at all. I recommend, though that at the beginning and for at least the first couple of pages you stick with one character’s point of view before shifting to another. Let’s start with Chris, as you did, and keep things focused on him and his perceptions:

— You step away from Chris before the first paragraph is even done. “It was apparent that something was wrong…very wrong.” Apparent to who? Whose observation is that? Randy’s? We haven’t even met Randy yet. Let’s drop that sentence altogether. Let’s cut that last sentence and use something like this, instead: “He couldn’t help himself.”

— You’ve introduced Chris so let’s bring Randy into the narrative through Chris’s perception. How about if we eliminate the second paragraph (but not throw it away altogether; more on that below) and go for something like this:

The doormat sensor went “dingdongdingdong” as Chris walked into the store. The cashier stood at the far end of it behind the counter, holding an open copy of Cavalier, eying Chris with a look of uneasy surliness. Chris thought that the guy looked to be about his own age, thirty or so. As Chris approached the counter he could read the name tag — “Randy” — pinned to his blue smock. Randy looked to Chris as if he wanted to be anywhere but where he was, which was just how Chris felt.

— Let’s take a look at those fourth and fifth paragraphs:

If he wanted to stay alive, Chris would have to rely on his ability to send a single telepathic message. Being a carpenter by trade and not a psychic, made the chance of success infinitesimal. But Chris had to at least try. It was his only hope.

Chris locked onto Randy’s eyes and concentrated. He screamed as loud as he could into his own head hoping it would get Randy’s attention.

— Anon, these don’t quite work. I get what you’re going for, but if Chris doesn’t have telepathic powers what makes him think he’s going to suddenly develop them? And the third sentence — “ Being a carpenter by trade and not a psychic, made the chance of success infinitesimal.” You don’t need the comma for sure. What if you change the sentence order and a couple of words?  See if this is better:

Chris wanted — needed — telepathic powers in the worst way. The problem was that he was a carpenter, not a psychic. He locked onto Randy’s eyes, hoping he could in some way communicate that he was in trouble without using words.

— I do like what you did here, telling us a bit about Chris — he’s a carpenter, which is interesting — so good on you. Keep doing that. Drop a few more breadcrumbs like that throughout the first couple of pages so that we get to know Chris and begin to empathize with him.

— Let’s drop down now to the seventh paragraph, the one that begins with “Sweating and trembling…” It ends with “It was apparent that something wasn’t right.” Again, where is that thought coming from?  Have we switched point of view to Randy again, who is looking at Chris “sweating and trembling” all over the place? Again, let’s keep the point of view with Chris while we change that last sentence a bit, using some of that second paragraph that we removed but did not throw away:

Chris was sure that Randy could tell that something wasn’t right with him. That didn’t mean that Randy would do anything about it. Jimmie’s was right off I-95 in South Georgia. Chris figured that it would probably be odd for Randy,   to not see something out of the ordinary at this godforsaken hour and at the back end of Bumfreak, Egypt. There was no help here, for sure.

Notice that I changed “somewhere between late night and early Sunday morning” to “this godforsaken hour.” The reason that I did that was that you already established in the first paragraph that things are taking place early Sunday morning. If you want to give the impression that it’s really early then give the time or mention that it’s “full dark” or even “no see” (as they say in the cotton fields).

— When/if you want to change the point of view to Randy you might want to remove Chris from the scene altogether. Have Chris leave the convenience store. Skip a couple of lines, begin a new paragraph or chapter, and switch the third person narrative from Chris to Randy. You can do anything from having Randy decide, yeah, that guy was weird even for the night shift, and calling the police, to pulling out a burner phone and calling an unknown person and saying, “Yeah, your pigeon was just in here, right on schedule. He looked REALLY shook up.” You can have all sorts of fun with this. Just make sure that it’s plausible.

I hope this helps, Anon. My rewriting is merely illustrative. There are several different ways to follow my suggestions and you should follow your heart. Seriously, I LOVE stories that involve gas stations off of the highway.  I want to love this one. I kind of already do, warts and all. I’m just not ready to buy it coffee yet, gaze into its eyes, and have it throw me over its shoulder and carry me off.

I will now make a valiant and probably futile attempt to stay uncharacteristically quiet while some of the finest folks in the world — our readers at TKZ — comment and offer additional suggestions. Thank you, Anon, for participating in our First Page Critique by sending us the first page of The Divinity Complex!