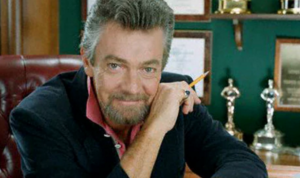 Some years ago I had the chance to meet and listen to the late Stephen J. Cannell. Cannell was, of course, the television wunderkind who created such shows as The Rockford Files, Baretta, The A-Team, 21 Jump Street, and others. He wrote at least 450 filmed television scripts. The guy had a Midas typewriter.

In the 90s he started writing crime fiction, then a series of books featuring LAPD detective Shane Scully.

So Cannell was on this panel with Robert Crais and T. Jefferson Parker. Someone asked him a writing question, and Cannell said something to the effect that he always asks, “What’s the bad guy doing?”

Even when the bad guy wasn’t “onstage,” Cannell would be pondering: “What’s the bad guy doing?”

It’s a great question! We writers seldom give the offstage players any mind. I’ve written before of the power of the “shadow story.” What’s the bad guy doing? is one of the key questions to ask in that regard.

Note: you don’t have to be writing about a true “bad guy” to ask this question. It applies to any antagonist.

Let’s say you were writing the novel that became the movie The Fugitive, starring Harrison Ford and Tommy Lee Jones (in reality the movie was based on the hit 1960s TV series starring David Janssen, created by Roy Huggins). In the movie Jones plays U.S. Marshal Sam Gerard. He’s not a bad guy. He is in fact a good guy who happens to be tasked with nabbing Dr. Richard Kimble and sending him back to Death Row.

Let us further suppose that you were writing the novel in First Person or Limited Third Person POV (where you stay with one character’s perspective throughout). You would be in Kimble’s head as he comes home to confront the one-armed man who murdered his wife. Then would come the trial and Kimble’s wrongful conviction.

Next, the prison bus mishap, the train crash, the escape! Then Kimble struggles through the night with his wound and his prison uniform. And you’d come to the next morning when he sneaks into the rural hospital to dress his wound, get some civvies, shave, and get out of there without being noticed.

Finally Kimble gets out of the hospital, but not before he is recognized by a wounded prison guard from the bus. To keep the guy quiet Kimble pushes an oxygen mask on his face. And as the paramedics rush the guard inside, Kimble tells them to let the attending doctor know the guy has a puncture in his upper gastric area.

Which causes one of them to ask, “How the hell does he know by looking at him?”

Kimble then hops in the ambulance and takes off.

Nice scene, there, writer! The opening act has been awesome!

But then you come to your project the next day and can’t figure out what to write next. If you’re a pure pantser, of course, you can write about anything. So you do a scene where Kimble falls into a giant hole that spits takes him back in time to the Battle of Little Big Horn. There he tries to save as many wounded as possible until…

Oh bollix, you think. I wish I’d done some outlining! And I wish I knew why I keep using the word bollix!

Ask the Cannell question! “Hmm, what’s my antagonist doing while Kimble is at the hospital?” 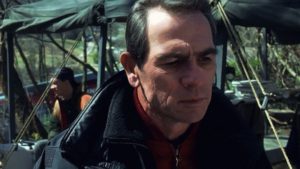 The nice thing about the movie is we get to see it. We cut back to Gerard at his command post, making plans. We see what kind of team and resources he has assembled.

So back to the hospital. You’re thinking about what Sam Gerard is doing. You imagine him at the crash site, with his team gathered around him. Then one of his people runs up and says, “Hey, we just got a report. Kimble stole an ambulance!” What would Gerard do next?

Which gives you the idea for the next scene in your novel. Kimble looks up and sees he’s being chased from the air!

Way back when I was first trying to learn this craft of ours, and writing copious notes on what I learned, I jotted this down: Most of the craft of fiction is knowing what questions to ask at what time.

I still think that’s a pretty good insight. And What’s the bad guy doing? is a darn good question.

Do you know what yours is doing?

13 thoughts on “What Is Your Bad Guy Doing?”