I spoke with author James O. Born a few weeks before New Orleans Bouchercon 2016. Jim is the real deal. He is on the cusp of retirement from the Florida Department of Law Enforcement and previously worked with DEA. He was also Elmore Leonard’s go-to guy on police procedure for over two decades. Jim has written a number of classic detective novels and next year will be moving into an extremely high profile writing slot. As if that isn’t enough, he annually presents an excellent panel on weaponry at Bouchercon each year. Because I was driving to New Orleans and he was flying, Jim asked if I would mind bringing some firearms with me. Jim assured me that he had cleared the presence of the weapons with hotel security and that I would be able to bring the weapons into the host hotel without difficulty.

On the morning in question I drove to the host hotel (I was staying elsewhere) with a square box briefcase containing three handguns and a shotgun bag containing a 12 gauge shotgun. All of the firearms were unloaded. I also had my loaded concealed carry weapon of choice (and my concealed carry permit) in my pocket.The briefcase with the handguns looked like any other briefcase (something like this Filson Briefcase); the shotgun bag with the shotgun inside looked like…well, a shotgun bag with a shotgun inside. I unloaded the car and turned it over to the hotel valet, who asked me conversationally if I was going to do any hunting, to which I replied that I was assisting with a panel at the writers’ convention. I then walked into the lobby, exchanged greetings with the gentlemen at the Bell Captains’ station, then proceeded up the escalator.

I had reached the second floor and was walking toward the third floor escalator when I was approached at speed and with purpose by an unarmed security guard who asked me 1) where was I going and 2) what was I doing. I stopped, politely told him, and also mentioned that my presence had been cleared with the head of security. The security guard, civil enough but all business, told me 1) that he hadn’t been advised and 2) to put everything down. I complied; he asked me what I had in the briefcase and I told him, and also advised him that I had a concealed carry permit and a loaded revolver in my pocket. He told me to step back from the briefcase and gun bag, which I did, and then ordered me to take the revolver out of my pocket and unload it. I stepped back, and said politely, “Sir, I will comply with your request, but please note that I am in full compliance with the laws of the state of Louisiana in carrying this. I will happily show you my concealed carry permit as well.” He declined to see the permit, telling me that I had no right to bring a loaded firearm into the hotel (wrong, but I did not press the point) repeating again his order to me to remove the revolver and unload it. I offered to let him remove the gun from my pocket himself, which he declined to do. The entire time that we were having this exchange I kept my voice down, my hands away from my body (except while removing the revolver from my pocket), and my demeanor cooperative and polite. After presenting my revolver, unloading it, and setting it down (he had me keep the bullets) I suggested that we call Jim and get things straightened out. I did just that; Jim came running and after a polite exchange with the guard, the head of security was called. That gentleman confirmed with the guard that all was well, and after a bit of back and forth (which isn’t germane to our purpose today) we all went about our business. Jim’s program was terrific, as always: entertaining, funny, and extremely informative. 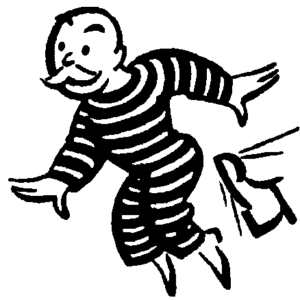 Why all of this? My first thought upon seeing the guard approaching was that I hoped this wasn’t going to turn into a “thing.” By “thing,” I mean the summoning of a member of the New Orleans Police Department. The department is understaffed, underpaid, and over-regulated; their default response to a lot of situations is, alas, take the subject (which, in this case, would be me) to Orleans Parish Prison. I did not want to go to Orleans Parish Prison (known locally as “OPP”). I could see myself being summarily frog-marched down a long corridor where I would be quickly lost in the bowels of the criminal justice system, undoubtedly acquiring at least a couple of sets of unwanted and untoward stretch marks before things got sorted out (not to mention losing my guns). I could have given the guard an argument about my rights, the limits to his authority, and all of that good stuff, while refusing to comply at every step along the way. No; polite and cooperative, that’s me.

Now. The guard made a bunch of mistakes in dealing with me, and they didn’t have to do with failing to recognize me (“Hey, weren’t you in LA-308?”) or stopping me to begin with. With regard to the latter, he didn’t get the memo about the presentation; stuff happens. If he detected a potential problem he should be stopping me, and I have no business being unhappy, under this fact pattern. But. There’s a right way to go about this:

– A subject is either a) a threat; b) a potential threat; or c) not a threat. If c), there is no reason to be stopping them. The guard obviously regarded me as b), maybe a). So why did he approach me while alone and unarmed? He should have had at least two people with him, so that I was semi-surrounded from the beginning, one in front of me and one on each side. Nothing threatening; just folks have a chat. A couple of the bell captains would have been fine.

– He should have taken me up on my offer to let him remove the weapon himself. That I was a) polite, b) cooperative, and c) older is no reason to assume that I’m not a threat. See the paragraph above. What if I was giving him a load of buena sierra, stopped cooperating, and suddenly pulled the gun out?

– He should have searched me further, and then moved me against a wall, away from the guns, until everything was sorted out. Instead, he let me stand away from, but within arms’ reach of, my guns, and assumed that since I had told him about my concealed carry revolver that I had nothing else untoward in my possession. I did. I was wearing a utility hack knife on a necklace sheath. On those rare instances where I have been stopped and frisked — not because of what I was doing, but because of who I was with — I have been amazed that law enforcement (or whoever) always assumes that if they find two weapons you don’t have a third on you. Some folks do, and they are not all harmless little guys such as myself, full of well-mannered intent and good cheer.

This all could have gone badly. On my end, it’s an example of how being polite, civil, and reasonable can go a long way. On the guard’s end, it’s a cautionary tale. For you, the foregoing is offered as a teaching lesson, not only for your written vignettes but also for your real world dealings. I hope it helps with both. Has anyone else had an experience like this?

23 thoughts on “One Morning at Bouchercon”