Today I’m delighted to welcome author Terri Lynn Coop for a Q and A.

Terri is a lawyer by day, writer by night, and an unapologetic geek the rest of the time. Her work appears in the “Battlespace” military fiction anthology and the spooky “No Rest for the Wicked” collection. She is a long-time member of the TKZ community.

Please describe your journey as a writer, including any challenges and obstacles you’ve had to overcome.

I didn’t write anything except exams in pursuit of my engineering degree, back then it was all about the math. By the time I hit law school, I was taking every writing class I could to avoid exams. One class, Law and Literature, stuck with me. The professor stressed how the body of American law develops like an epic novel, new chapters constantly building on the old. I developed an appreciation for some of the great legal writers and even forgave the professor for making me read Kafka.

And it was a good thing. My nascent writing career was short-circuited in 2005 when the family antique business became embroiled in an intellectual property lawsuit. Over the next five years I probably wrote 500,000 words in briefs and motions in four courts across three states. Despite the myth that lawyers are wordy, I had to learn, and learn fast, how to persuasively tell my story, complete with all the backstory, research, and reasoning in 25-page chunks. I had a very specialized audience of one, the judge. I won the case, but it was brutal.

During this time I also wrote the two “trunkers,” novels of such horrifying proportion that I will do everyone a favor and leave them in the darkest recesses of my hard drive.

Everything changed in 2009 when my husband was seriously and critically injured in an accident. I was thrown into the role of full-time caregiver and primary wage-earner for two years. Even though he eventually had professional health care aides, I still worked three jobs to keep the household running. Writing was my escape then, and out of that cauldron came the first novel I would let anyone read: “Devil’s Deal”. It went on to win the 2013 Claymore Award at Killer Nashville for best unpublished novel.

Where do you live, and how does that setting inform your writing?

I live on the Kansas prairie in Fort Scott, about 100 miles south of Kansas City, but I’ve lived coast to coast and traveled widely. My settings come from my road trips. For example, in my novel, I’ve camped at that trailer park in south Texas, had breakfast in that truck stop diner, and I spent six months working in downtown Dallas.

Here in Fort Scott, I love to sit in the local diner and listen to the locals talk.

How does your background influence your writing?

After my Claymore win, I was interviewed by The Library Police. They asked me why so many lawyers end up as writers. I told them that as a group we are bright, literate, and bored. The practice of law is interesting and can be fulfilling, but if done correctly, is extremely routine and administrative. As a public defender, I practiced what I called “law by the pound.” It was about volume and number of cases resolved. A lot of interesting tidbits came my way, but most of it was very mundane. However, it was so immersive that it couldn’t help but influence my writing in both content and style.

How old were you when you first felt the urge to write, and what inspired you to get serious about honing the craft?

Ignoring my high school emoting, real inspiration hit in 2003 when I joined an online writing group. I got serious about learning the craft when I wandered into venues that were considerably less impressed with me than I was.

What are some main themes you return to when writing?

The series that kicked off with Devil’s Deal will have an underlying current of trust, betrayal, loss, and loyalty. In the first book Juliana can’t abandon her father to his fate, even though he may well deserve it. Law enforcement knew exactly how to manipulate her into risking everything to save him. She called it a “familial bomb vest strapped around her heart.”

Which authors have most influenced your writing?

I have a spare style, terse to the point of being brusque. Most edit notes I get are to “put more in,” rather than “cut more out.” In books, I like plots that move fast and sure with well-defined reluctant heroes like Lee Child’s Jack Reacher, Steve Ulfelder’s Conway Sax, and John Gilstrap’s Jonathan Graves. But, I’m also intrigued by rich characters and settings like Larry’s McMurtry’s Texasville saga. So, I try to keep it moving, but also have character quirks and a lot of repartee in dialogue.

For POV, a short work called “Lawyers, Guns, and Money,” by J.D. Rhoades completely sold me on the effectiveness of using first person for tight fast plots where the action swirls around the main character. I liked keeping the villains slightly off-stage. The bad guys drove Juliana and Ethan like puppet-masters.

Do you have a “day job”? Tell us about that. Does it inform your writing in any way?

I’m semi-retired from practicing law. I’ll never give up my license, but I really burned out on courtroom work after some tragic cases. So these days I run the antique business I inherited from my late husband, hustle freelance writing work (including a gig writing catalog descriptions for Halloween costumes,) and hack away at my novels. I’m always on the lookout and absorbing settings, overheard snips of conversation, legal news, and other writers to incorporate into my writing.

What are you working on now?

I am working on the second installment of the Juliana Martin series, titled “Ride the Lightning.” After the debacle in Texas that ended the first book, Juliana is burned out, salving her wounds as the cynical manager of a Biloxi roadhouse and dance club. Everything is going fine until Ethan Price shows up on undercover with an outlaw motorcycle club.

When did you first connect with the TKZ community, and have the discussions here had any impact on you as a writer?

I came to TKZ in about 2007. I was going to a writers conference where John Gilstrap was a presenter and would be critiquing my writing sample. I researched him and landed here. Best decisions I ever made. First the critique, including the now famous “this sucks,” and becoming part of this community have all contributed to my writer’s life. The lessons, discussions, fellowship, and critiques have all left positive impressions on me and my work. Even when I go quiet on the comments because of some kerfuffle in real life, I’m always around.

Many thanks to Kathryn Lilley for this chance to ramble. I’ll see you all around TKZ. I’ve also been known to blog at Readin’, Ritin’, and Rhetoric. [http://readinrittinrhetoric.blogspot.com/] 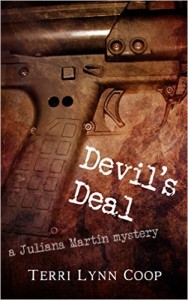 Devil’s Deal is available through Amazon. [http://www.amazon.com/Devils-Deal-Juliana-Martin-Mystery-ebook/dp/B00N9OL3FK/ref=sr_1_1?ie=UTF8&qid=1415893921&sr=8-1&keywords=terri+coop] Ride the Lightning will be out by late summer.