Have you noticed how you plod through some books you’re writing and others seem to write themselves? Why is that, do you think? Peril by Ponytail, my upcoming mystery release, was a breeze compared to some of my other stories. I had a wealth of research material from my trip to Arizona. Not only did I stay on a dude ranch similar to the one where Marla and Dalton honeymoon in the story, but I explored a copper mine, hunted spirits at a haunted hotel, toured a cave, visited ghost towns, and more. With such an abundance of historical and sensory details, I had too much material for one book. The story sprang from the setting and the characters I’d placed there. Photos brought me back to the locale along with my detailed notes. I didn’t lack for words to fill in the pages. 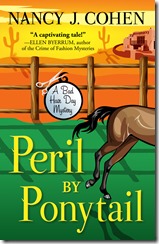 My next story, Facials Can Be Fatal, is a different story…figuratively as well as literally. Based back in my hairdresser sleuth’s hometown, it involves a client who dies in the middle of getting a facial. The method of death tripped me up, and it took me weeks to decide Howdunit. Then I created my ring of suspects, but it wasn’t enough. The spark was missing. When I hit upon a historical angle and the idea of a deserted theme park, those two elements hit the ball into the field. Now I was off and running. I’d needed that ember to ignite the flame of creative passion.

Now I’m writing the sequel, since #14 in my series directly follows book #13. Normally, I write a detailed synopsis before the writing process begins. In this case, I wrote four pages of plotting notes that essentially go from Point A to Point B without much in between. A mystery doesn’t work without twists and turns. My normal synopsis runs 12-15 pages. But just by winging it, I’m already up to page 40 in the story. I’m not sure where I am going. I have hazy images of the suspects and their motives in my head. And I haven’t yet hit upon the angle that’ll make my pulse race.

Do I need it? Maybe not.

I sit down every morning with the blank page in front of me and my five pages a day goal, and those words somehow get filled in. I expect at any time to get stuck due to insufficient plotting, but it hasn’t happened yet. This is a different kind of mystery for me. It’s not a “dead body up front” kind of story. There’s been an accident, and we aren’t sure yet if it was intentional or not. Meanwhile, I’m going with the flow to see where it takes me.

Does this happen to you? Are some stories easier to write than others? What do you think makes the difference?

10 thoughts on “When the Story Writes Itself”